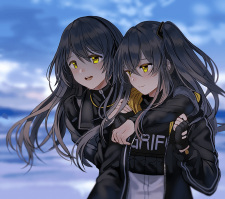 OsakioKieru Dec 24, 2020 12:38 PM
Good to see someone admitting that Code Geass is the best anime just like me. So, because of that...
I, Lelouch Vi Britannia command you to accept my friend request

giannis85 Aug 23, 2019 1:38 AM
Hi! It's been a while! I see that you picked Gundam: Iron Blooded Orphans as your first Gundam… That's a great choice indeed, since I also started from it - since it's so beginner's-friendly, heh! The second season, is even better, heh, heh!

SenpaiYoYo Nov 11, 2018 2:30 PM
Haha ik it kinda weird but let me explain myself, in the first season everything was great, but they were some stories less entertaining, like mao's one, some school event's, maybe the drug story? The first movie had all the best scenes( except of when lelouch speaks to sherly after erasing her memories) and of course it didn't have any of those less entertaining scenes. I just think that *for a movie*, the first one, you can't make better than that, to me it had all i wanted. (even where i wanted it to stop). As for the second one, they took many euphy scenes, most important the one on the island, and therefor maybe since they didnt have built for the movie audience any deep relation between lelouch and euphy, they could have changed they way she died, for me Lelouch *bad joke* and how it endend killing her, was maybe the only thing i disliked in the first season, and was hoping they would change that. And yeah the second movie could have been much better. Now i will talk abou the second season, that one had quite a couple of flaws but my lord, definitely the best scenes, rolo, shirley and lelouch death. Lelouch taking over the throne (in school uniform haha) alongside spinzaku, and there's where suzaku fought the knights of round, plus his epic batlle with kallen... So many good scenes..but yeah there was still some bad stuff, you probably heared all of them from the guys who like the R1 more.
So when i comes to the 3rd movie it had almost all the best scenes, did waaaaay better when it comes to lelouch vs his father, cause in R2 i think it wasn't very well explained and if im honest no much logic nor entertainement. There's just 2 thing i could have wished for, 1, that shirley death, cause it was epic scene and it also it role in showing how lelouch lost all people who loved him so i hope they have a good reason in that 4th movie to keep her. And 2, a small detail none r2 or the 3rd movie had, is when the black night betray zero, the ova did alot better... I hated it how they just were going to shoot him...
One last thing! The music... Good heaven... No comments... Especially the last battle <3
There's more details but in General this is it. Code geass is a masterpiece.

LIQfilms Nov 3, 2018 4:16 AM
As for number ratings, I wouldn't really pay no mind to them. Aside from being incredibly arbitrary, to begin with, the scores I have given are simply a reflection on how much a piece means to me. So the higher the score, the more in which I love the show, and the more in which it speaks to me personally, whether that be in the messages and themes it conveys that communicate with me personally, such as The Tatami Galaxy or a wonderfully charming time that makes me incredibly happy when I watch it, like Cardcaptor Sakura. Numbers aren't really that important to me, tbh, which is why I don't put much thought into them, and rate simply as a means of representing how much I like a show.

With Houseki, even though I didn't talk about any negatives, and despite me really liking the show, it doesn't personally resonate with me enough to reach the higher scores of a 9 or 10. Anyway, thanks for taking the time to read my review :D

CSKaori Oct 13, 2018 7:41 PM
If his mean score wasn't bad enough, he seriously disapproves of great anime like Code Geass, Re:Creators and A Silent Voice! Like, who does he think he is?

CSKaori Oct 13, 2018 7:23 PM
That Ando guy doesn't like anime at all and his terrible reviews prove that

Honestly, how do you expect anyone you ask to take a question like that seriously?

Short answer: Yes. There's good shows and bad shows out there. When you've seen a large amount of both, your mean evens out.

freecaio Apr 3, 2018 6:40 AM
the fact that your review got removed shows how stupid ditf's fanbase is

giannis85 Apr 1, 2018 11:15 PM
Hello! Jeeez, those who deleted your review were just parts of the... conspiracy to promote that crappy anime! I really don't know what I can think of MAL admins anymore...
All Comments