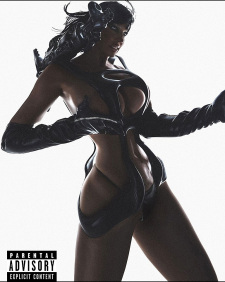 Vargnatt Aug 2, 12:44 AM
It's safe, heals the damaged hair and makes it smooth and straight. But it's important to get a real product. Maybe you'd remember, there was a "Brazilian Bowout" trend during mid 2000s that you could see on hairdressers. Keratin products used for the application back then. Trust me it's totally safe. Keratin is just the key structural material of your hair and nails. Nothing poisonous or anything.

Well if you want to keep them curly you can apply "curly girl method" by using sulfate free shampoo and microfiber towel (if not, a tshirt would be useful too)
But if you want them straight you can apply keratine treatment. You can find on YouTube about how to apply.

Timbsoka Jul 31, 8:45 PM
Hey how are you? Hope you've been doing well! Can you fill out this quick survey? All you have to do is check the boxes for whatever series you recommend. Thanks :) https://forms.gle/Ytczt2ypYsci6s7V6

Cosmictimespace Jul 29, 8:08 PM
Thank you for the birthday wishes, Mila! Much appreciated!

Cosmictimespace Jul 27, 7:47 PM
Considering that Fist of the North Star influenced JoJo and Berserk as I’ve mentioned before, I’m pretty sure more people will get into it, especially since the new releases will be a better experience with the writing and art, unlike online scans/translations. I hope this series survives its publication sales unlike the 90s’. While I understand manga and anime wasn’t as popular as it is now, it still wasn’t a great time for certain series to come out to the west. The same thing happened to other series that eventually got proper publications, like Urusei Yatsura and Battle Angel: Alita. Once this series is done publishing, I plan on doing a proper reread.

Same here. It’s kinda disappointing when the series is only known for its memes. While I don’t find memes bad (unless spammed to death), it kinda paints a different picture of a good series that is more in the unfavorable side of things, as that’s more of what it would be known for by that kind of exposure.

Yeah, the series did have its share of localization, but it isn’t as bad as some other series got it. Heck, I’d take Rin as Lin, and Yuria as Julia any day over the ridiculous name changes of JoJo characters/Stands. Yes, I understand why they do that, but it gets really annoying and confusing.

Speaking of JoJo, did you know Stardust Crusaders was the only part of JoJo that was released in America until the 2012 anime adaptation hit the scene?

Also, my deepest apologies for the late reply. I know you understand, but my month has been very busy, fortunately for the best, but busy nonetheless. Ive said this to a few friends, and I’ll tell you that your replies are always appreciated. Even if I can’t reply on time, just know that any and all replies you make are appreciated, and that nobody’s being ignored.

Vargnatt Jul 25, 1:11 PM
Hmmm i need to do a choice between Golden Boy and Golden Kamui. Which one would you want me to start with?


Oh thank you so much. I didn't notice it. I'm going to fix it right away~

Vargnatt Jul 20, 9:46 AM
I'm not sure how reliable are they... thanks for the tips. I'll consider it and lately I'm planning to improve my skills as a hairstylist.

And I'll start to watch Golden Kamuy this week btw thanks for reminding me.

Vargnatt Jul 16, 12:00 PM
Well you have no idea how getting a job is difficult in Turkey, speaking English isn't enough to be a teacher. This is not America or any European country.

Why do you think you have no luck?

Vargnatt Jul 12, 12:44 PM
Sadly I'm still unemployed. I have stopped looking for a job for now because i keep failing at job interviews despite how many times i tried and moreover many people in here are losing their jobs due to pandemic. :/

And wow, weather isn't only hottest thing in here right now haha. Thanks for the eyecandy :D

Vargnatt Jul 12, 11:28 AM
Yeah, thanks for asking :) i was on vacation for 2 weeks and i have returned back to home yesterday!

What have you been up to?

Vargnatt Jul 7, 2:14 PM
Oh it's just 12 episodes... i might watch at some point when i return to home. Thanks for the recommendation. So what's name of the character on your profile pic? :)

Fudo is a legend indeed. He took good care of dem kids.
Haha yeah, Kenshiro was probably the angriest in that moment with Shu.. ;_;
Yeah, it was one of the best fights between Kenshiro and Souther for sure. HAHA, you finished it so you now know what happened to Yuria :P

If you finished Part 2 or whatever, how did you like it?

Hajime no Ippo is pretty good so far. I'm only 20 episodes in though. I added some more anime I finished in between and I am currently watching Castlevania which slaps hard.

Man, when someone told me the news about Kentaro Miura that kinda ruined my day. You didn't take it well either I'm thinking?

I'm not that active on MAL anymore and I hope you are well :-)