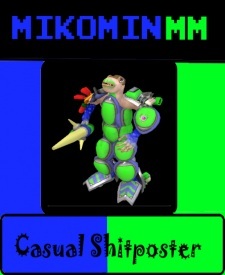 AivanK Aug 15, 2018 9:11 PM
Was that quote from one of my comments?
Depends on what anime.
Because i like? Obviously the last episodes of Darling weren't the best, and i think i still haven't processed that but it's still a good anime.

MozillaFennekin Jul 2, 2018 7:40 PM
All lists are private because MAL is screwed up.

-kikyo- Apr 23, 2018 12:47 PM
i am a grandma*
i and do accept your criticism but the issue with people who complain about others grammar is that they never show them where's the mistake , so you're being uselessssssssss by pointing that out .

Drumbottle Mar 19, 2018 4:36 PM
Why are you taking this seriously obviously I was joking and by the way what's with being man or woman ??

You should've asked " how dare you talk to someone like that " ??

You're enjoying the show and I'm happy for you. I have too many shows and too little time to waste it on something I dislike as much as Pop Team Epic.

lcd Dec 14, 2017 3:06 PM
I just typed a lengthy reply to the previous person commenting my review, I hope that will answer and more clearly describe my position on the show.

Thanks for reading my review :)

BlackFIFA19 Dec 7, 2017 11:23 AM
Well sorry for that then, i just do not like to see two guys or girls get it on with eachother, ive got nothing against them, do whatever makes you happy, but dont bother me just with it.

BlackFIFA19 Dec 7, 2017 10:56 AM
What is it youre trying to say? Or is it that you just cant read? If so ill say it again, Yaoi&Yuri is disgusting, if you dont like it you can just go fuck yourself im entitled to have an opinion.

Syadona Nov 4, 2017 2:49 PM
Sorry I haven't responded in a while, just haven't had much enthusiasm in talking on here. How are you doing?

So, if you combined all those together, you would want to make a Castlevania/Metroid/Shovel Knight-like game? I'd be up for it if you were to make such a product.

That's an interesting thought about landscapes changing with time, never thought about documenting the change for yourself, that's quite beautiful. Yep, good ol' blondie coming through with those snazzy pics could inspire just about anyone to take up such a thrilling hobby. Bet he's inspired hundreds of thousands just like you. Maybe I should as well...

No, it's been about a few years since I've watched any non-Japanese cartoons. Tho I will say, I did watch a few clips of Rick and Morty on YT, and I'm a little impressed with the humor and animation they got going on. I can appreciate Rick being the best/worst grandfather in the world now lol

Yeah, I watched a bit of it. It was alright. I laughed quite a bit at one part, but I can't remember which moment it was.

Uhh, played a decent amount of the original collection, delved into Battle Network 2 and 5 a lot, played the side-scroller version of BN, actually liked it, played Megaman Zero 1 and 2, enjoyed them, and also played Command Mission. My first Final Fantasy before I played Final Fantasy, I suppose lol very good, despite being somewhat derivative. You?

Not yet :(
All Comments