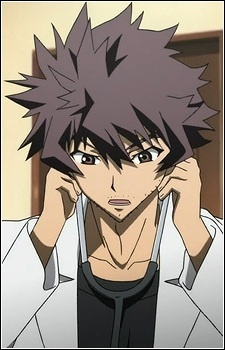 Huss Feb 2, 2019 12:56 AM
Hello human. i have came in please. i apologies for coming in not invited to this holy place of yours. i have finish a show that ii really like. due to have few or not existing friends i needed people to talk about that show. i have went to the statistics page in the anime file in this site. i have noticed that you have completed the show relatively recently and you have a picture which means you care about your social status to some degree. i am a weird person. i am not an English native speaker. i am not an interesting individual. some think otherwise, but i do not think so, at least in terms ....ok i do not know what to say next so let us close on that. i like to discuss or at least share my appreciation of the show. i do not know how. every person is different and so not everyone is interested in talking the same way. luck is my only ally here. thanks and again i apologies. the show i am talking about is Uchuoten Kazoku, and in English it is called the eccentric family. have a good day. always drink water

Hello there Night Kids! (◠ᴥ◠)/ I'm here bringing you the May newsletter! I want to start off by saying thank you! Our family is growing quickly and I couldn't be happier~ Thank you for being a part of our wonderful family!

For Members: Our club is slowly putting out content everyday since many of the other staff members are currently busy with school, or personal business. If you would like to help or give suggestions then please do so and we will considerate to help benefit this club personally~
Thank you ^_^

- The Night Kids is hiring for many different positions. You can check them out and apply here

- If you haven't already, add your birthday here to get your very own edition!

-The Night Kids are looking for a new Claim-maker! If interested of joining our staff, click here!

ABC Song Name~Count to Infinity!
Give me your ctrl+v!Guess the Anime!
Males vs FemalesShiritori ~Anime Style~
Take One, Leave the Other!
This or That?
What are you listening right now?

Keep on a lookout for Solo Editions and Black Butler character Badges Edition!

Remember that you can opt out of receiving this newsletter by letting Hime-sama know.

Until next time, take care!

[code]G I G A N T I C D E L I V E R Y
total editions: 8 || total cards: 333
any problems? leave a comment or pm me!
sorry for the suuuuuuuuper duuuuuuuuuper late delivery. :c
school has taken all over me, im late for 4-5 months because of dem school
i think you might not remember these threads anymore. press ctrl+f then your
old/new username if still not found, try your other names. message me if there
are problems. i think this is my last ever delivery. yeah some of you might
already forgotten me so yeah, enjoy your late cards ;u;
save and rehost within 2 weeks
v v Cardsv v
[spoiler][quote]Anime Paradise Club
Fairy Tail WE
✚ Thread ✚ Cards ✚
Tokyo Ghoul LE
✚ Thread ✚ Cards ✚
100+ SE
✚ Thread ✚ Cards ✚

Dai_to Oct 31, 2015 10:53 PM
Hi, how are you? I guess its autumn there in BH.. here it should be rainy season already, but on the contrary its Blistering HOT.. lots of events going on for halloween, costume parties in malls and cafes around town (though theres no trick or treating around the neighborhood like in the US), so is there anything going on for halloween in BH?

I guess I'll get used to all these hecticness soon..
In "Greys Anatomy" the story revolves around Surgeon Residents, while in "Scrubs"
its about medical Interns (so surgeries there is seen from the "Scrub's" point of view) Thank you, I'll do my best to survive, while enjoying the journey..

Well thats quite a surprise, but then I guess Immigration officials could get annoying anywhere you go.. ASEAN members are (10 states); Brunei Darussalam, Cambodia, Indonesia, Laos, Malaysia, Myanmar, Philippines, Singapore, Thailand, and Vietnam, and 1 observer Papua New Guinea (still unsure to join.. well PNG is getting a LOT more benefits aligning itself with Australia)

Haha.. well as long the language can be written alphabetically I'm sure we can learn it easily.. hmmm.. Korean.. yeah well, I guess they can learn some exclamations like in Japanese :-9

Its been over 2 centuries since western medicine arrived in Indonesia during the Dutch Colonial era.. the first Medical school was established in 1879 (to deal with smallpox plague in the region) up to the early 90s medical profession was considered a "godlike" profession with more rights than the patients, even though it has the longest & hight tuition fees out of all other educations..
but it all changed after the economic recession & indonesian reformation happened in the late 90's, people became more concious about laws, and since the reformation external influences, mainly US flooded in more easily includin the rampant medical lawsuit trends, nowadays medical professional live in fear of lawsuit and need to really pay attention to patient rights to avoid it, hence medical associations for each profession exist to protect its respective profession against lawsuits..
Luckily, since indonesia is a big country with a huuuge population it still needs a LOT more doctors & nurses so you will be guaranteed a good job & salary when you graduate as long as you're careful..

haha.. I've always thought that snowy winter is fun, but I guess theres a bad side to it too..
the only Winter I've experienced was in Brisbane Australia, and since its Subtropic there it doesnt snow (it does gets pretty cold -5'C, but no snow)..

I see.. well its pretty fun I guess, It could be better if it has multiplayer/online multiplayer options..
Yup I cried when Naruto met Minato & Kushina..
The next season of nabatsu no taizai & arslan senki will be out in 2016!!! I can't wait to watch them.. XD

I've finished tales of Zestiria BTW.. the ending did surprise me.. for the last boss fight (is not like the usual tales of battle where you can win by just having a high level through lots of grinding) it requires quite a bit of skill and tactic, I died like 5 times even though already at level 70-71..

I hope you enjoyed your holidays and will be able to finish your games before school starts..


Alright then (just PM the address).. I also feel that MAL is the only place that I can express my hobby freely.. SocMed isn't as condusive for privacy reasons (especially FB, cuz many of my family members are active on FB).. Although I don't mind you'd follow my instagram (since it isn't private, not for me anyways)

That sounds nice.. its nice to spend your birthday with your friends, are they highschool friends of neighbor perhaps? (I really missed my highschool friends its been 3 years since my last reunion with them, some of them has returned to my hometown, but most of them worked elsewhere in Indonesia, while I'm.. still stuck here) :-)

Phraze Oct 25, 2015 6:10 PM
Phraze's Card Delivery
lazy so no banner
named these randomly so you'll see some later editions first or vice versa
save and re-host. write here if there's any problems

decided to catch up with naming cards yesterday(13th October)
1,222 cards in 10 hours plus break. I'm insane...
now if only I can do the same with claim banners..once I get somebody to resize pics for me XD

[size=90]To those who can't find their cards~
Even if you requested at that thread.


★For some reason I don't know,
some of the cards didn't upload x__x
Especially for Made de Inspire OMC Batch#2.
(^And if you're username starts with Si to Z, you won't find it. ><)
★If the card you saw isn't the one you requested, I'm very sorry.
I'll deliver the right card soon.

If any of these applies to you, pls don't worry,
I will still deliver your cards of course!
But, separate from these batch though.
Sorry for the inconvenience.

Ctrl + F to find your cards.
Please save and rehost within 2 weeks.
Message me if there is something wrong.
Thank you for requesting! ♡