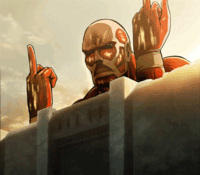 VintageHentai Jan 3, 12:02 PM
I'm sorry but I haven't gotten around to watching that anime yet but if I do, I'll let you know if I find a subbed vers.

By City Hunter movie, you mean the French one? Haven't seen it but I should now that you mention it!

Actually, Japanese as it appears in animes is not that hard to understand since it is so formatted and "basic" in a way, with some exceptions of course. Also, seiyus are professional actors working in a field with a lot of same-minded producers, directors and businessmen for a public that also has the same needs so it always sounds more of less the same (Japan is not a diverse country by any means) and is made very easy to understand for younger viewers. And the same goes with Japanese entertainment as a whole, yes it's very large and rich, but original and creative franchises are few and far apart from each other, shich is probably one of the reasons why I stopped watching new . At this point, business has clearly overtaken art in the sector and there's not much that's interesting enough for me to watch (might be age also and the fact that I worked in the sector for a long time too) compared to the new wave of American series released on Netflix etc... for example. Just seeing that a run-of-the-mill shonen franchise like Kimetsu no Yaiba or a mediocre movie like Tenki no Ko become so overwhelmingly popular pretty much prove that the industry doesn't have much to show for itself nowadays. Of course, I understand that the new generation doesn't think like me, but for somebody who has seen and experienced so much of Japan and the anime industry, I must admit it's pretty disappointing, especially how good a lot of it was until around 2005.

As for stuff I did and went to in Japan, of course I went some themed restaurants or bars like a Gundam bar in Nagoya and Tokyo, retro stores (Nakano broadway is my favorite anime-related place, far above Akihabara and Ikebukuro - although I like Ikebukuro for other reasons, being a diverse areas with loads of Chinese restaurants and places). Went to a Comiket or two also to accompany friends but I can't say I really liked it to be honest because of the phenomenal number of people and my passion for animes was already fading when I went ;) Back when I started to work in the industry, I also had lots of rare merchandise, figures, video games, DVDs, LDs that I found here and there or that people in the industry gave me etc... but I actually sold almost all of it when I left France and went to Japan, and never bought anything there since the appartments are so small, expensive and how difficult it is to store anything.

Anyway, I hope you won't let my personal experiences and opinions influence you and I hope you can learn Japanese, go there and enjoy it in your own way!

Jacut Dec 9, 2020 4:43 AM
Nice to meet you. I've been back in France for half a year now because of the covid situation but I didn't buy much stuff in Japan while I was there to be honest, and I'm not watching much anime nowadays either (don't like the new wave of 2010's animes, or maybe I just got too old ;() I usually watch my animes English-subbed although I don't realy need it - got used to it - and play games in English too unless the translation's not good or not available in which case I play/watch the original. I'm also a professional JP to FR translator now, either part or full-time depending on my other works, translated like 7 or 8 series and 4 video games I think? And I'm actually learning Chinese now :)

I watch anything and everything but I am somewhat demanding with what truly entertains me. I usually give lower scores than the average MAL user it seems.

About the Royal Tutor series, you are not far off from reality. I guess you watched it without watching it? xD

I'm an european fascinated with japanese culture so I guess I kind of get their interest on european history. The thing is that the show and movie weren't believeble enough for me to care about the characters or the story, not to mention the awful singing and ending. But hey, one less on my plan-to-watch.

Let me know if you enjoyed it, though. :)