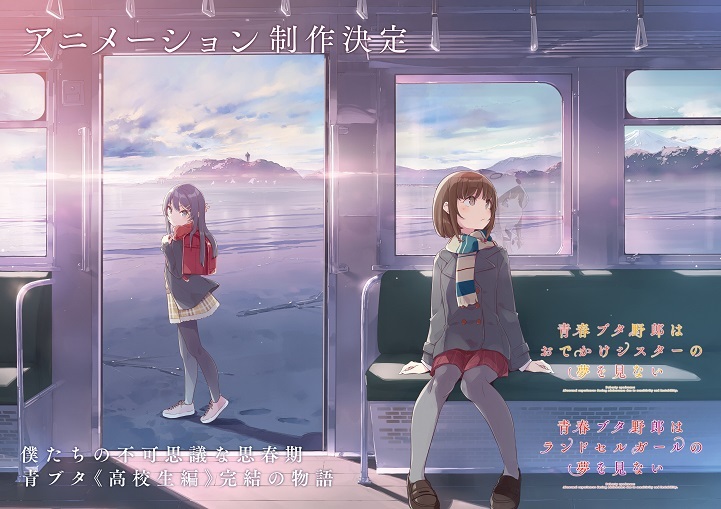 Returning staff at CloverWorks include director Souichi Masui (Hitsugi no Chaika), Masahiro Yokotani (Hataraku Maou-sama!!) for script and series composition, and character designer Satomi Tamura (22/7). The lead cast from the previous installments are reprising their roles.

The television anime aired in 13 episodes in Fall 2018. Aniplex of America licensed the anime and streamed it on Crunchyroll, Funimation, Hulu, and Netflix. The Seishun Buta Yarou wa Yumemiru Shoujo no Yume wo Minai (Rascal Does Not Dream of a Dreaming Girl) anime movie opened in Japan in June 2019, adapting the sixth and seventh novel volume.

Synopsis (Eighth Volume)
WHAT WILL IT TAKE TO MAKE HER WISH COME TRUE?

After a draining December, Sakuta is quickly nearing the end of his second year of high school. Since Mai is a third-year student, they don't have much time left together before graduation rolls around. Meanwhile, his sister, Kaede, is slowly but steadily venturing outdoors again. Just as she begins to find her footing, she announces her most ambitious goal yet—attending her brother's high school! Sakuta knows better than anyone how difficult this will be for Kaede, and he's ready to support her however he can. He's just not sure if that's what's best for her...or what she really wants... (Source: Yen Press)

Synopsis (Ninth Volume)
Finally, the day of Mai's high school graduation has arrived. While Sakuta eagerly waits for his girlfriend, an elementary schooler who looks exactly like her appears before him. Suspicious, and for all the wrong reasons... Meanwhile, Sakuta and Kaede's father suddenly calls, saying that their mother wants to see her daughter. She was hospitalized because Kaede's condition had been too much for her to bear, so what could she possibly want now? (Source: Yen Press)

only 2 volumes so its another movie.
cant wait to watch it.

Seeing Mai and Sakuta once again is just enough for me to watch it.

First season and the movie packed up and finalized everything quite masterfully in my opinion but I also wonder what the writer has to offer.

El-Melloi said:
@rvdboom I would recommend skimming through this page: https://myanimelist.net/recommendations/anime/5081-37450

El-Melloi said:
I wonder what part of Monogatari is going to get plagiarized this time. I recently rewatched what had already been adapted and it was as average as I remembered so I have zero expectations for this sequel.
Please refrain from replying to me with a very original "cope harder" or something on the same level of toxicity, the only thing you would achieve is making yourself look stupid.

Well, having watched both shows (at least Bakemonogatari but that was enough), I can only say that if Seishun Buta Yarou is plagiarizing Monogatari (which I doubt as the overlap between the two shows is very thin), the former largely surpassed the later in my eyes.

MadanielFL said:
Well time to read the light novels now, I've been planning to for a very long time.

The LN is pretty good. You find all that's good about the anime with more depth and inner thoughts. Less a "Light" than a "Novel" to me.

I don't know man I liked how the 1st season ended, I'm afraid that a sequel might ruin it.

After 4 years to aired in 1st season, it's time to get 2nd season

This show was a lot of fun back when I watched it. Hopefully, this sequel will be just as fun.

Late on the news because of the Hurricane causing power cuts but nice to see this get a sequel. I'm not the biggest fan of the writing in this series but I do love Mai and Sakuta's interactions for the most part so for that alone, there's something to look forward to. Just finished volume 8 a few weeks back when it released in English, and I can see some potential in the series trying to have its characters grow.

Looking forward to this I greatly enjoyed the movie

I am so excited for more of this!

Omg I can't believe it, yes yes yes this is exactly what I want. Let's fcking gooooooo

I would be more surprised if this didn't get sequel due to how popular it was :)

yes! seriously yes! i definitely will check this one out when it happens! :D

This show was fun back in its heyday, but it's been almost 3 years since this franchise had an animated adaptation, whether as a movie or a TV show. Hopefully, there will be enough excitement to ensure the continued existence of this franchise.

Holy FFFF this just made my evening

It’s about time. I wanna see more of Sakuta