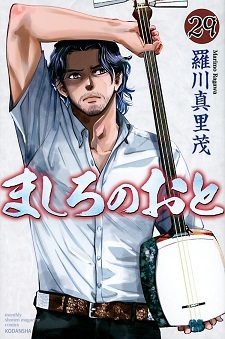 The August issue of this year's Monthly Shounen Magazine announced on Wednesday that Marimo Ragawa's Mashiro no Oto (Those Snow White Notes) will end in the September 2022 issue. The manga is expected to conclude its 12 year run on August 5.

Ragawa began serializing the musical drama manga in Monthly Shounen Magazine in April 2010, after publishing a one-shot in December 2009. Kondansha shipped the 29th volume on December 16 and will release the 30th volume on July 14. The 31st and final volume is scheduled to be released on October 17. The manga has a cumulative 5.5 million copies of its volumes in print, including digital editions.

Kodansha USA licensed the manga digitally in English in January last year and released the ninth volume on May 31.

Shin-Ei Animation adapted the manga into a 12-episode anime season in Spring 2021. Crunchyroll streamed the anime with subtitles.

Synopsis
Setsu Sawamura runs away from his small home village following the death of his grandfather, the legendary shamisen master Matsugorou Sawamura. On his deathbed, Matsugorou told Setsu to give up the shamisen if he was only going to imitate others instead of playing in his own way. Grieving, Setsu heads for Tokyo, hoping that the big city can inspire him to discover his own unique playing style. But Tokyo defies his expectations by drowning out all other sounds with the deafening noise of its city life.

Concerned about her son, Setsu's rich and successful mother, Umeko, waltzes back into his life and forces him to enroll in Umezono Academy. At the school, he meets Shuri Maeda, a girl who is fascinated by the Tsugaru shamisen and wishes to perform a song her grandmother once heard a long time ago. Shuri starts up a shamisen appreciation club and convinces Setsu to teach the members how to play the instrument. As he becomes more involved with the club, will Setsu be able to recover his love for the shamisen and discover the unique sound he lacks? [Written by MAL Rewrite]

The anime was so good!

I'll just wait here for the full translation of the manga, I'd love to read it once it's complete

I loved this anime, so I hope that they end up adapting the rest of the series since its ending soon

12 years? And after that they had such an average anime adaptation?

Anime was good, I wonder how the manga goes on