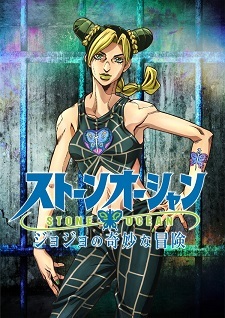 Synopsis
In Florida, 2011, Jolyne Kuujou sits in a jail cell like her father Joutarou once did; yet this situation is not of her own choice. Framed for a crime she didn't commit, and manipulated into serving a longer sentence, Jolyne is ready to resign to a dire fate as a prisoner of Green Dolphin Street Jail. Though all hope seems lost, a gift from Joutarou ends up awakening her latent abilities, manifesting into her Stand, Stone Free. Now armed with the power to change her fate, Jolyne sets out to find an escape from the stone ocean that holds her.

However, she soon discovers that her incarceration is merely a small part of a grand plot: one that not only takes aim at her family, but has additional far-reaching consequences. What's more, the mastermind is lurking within the very same prison, and is under the protection of a lineup of menacing Stand users. Finding unlikely allies to help her cause, Jolyne sets course to stop their plot, clear her name, and take back her life. [Written by MAL Rewrite]

David Production adapted the first five parts of the manga series into television anime with the most recent, Ougon no Kaze (Golden Wind), airing in Fall 2018. Crunchyroll simulcast the anime as it aired in Japan. VIZ Media released the show on two home video installments on September 1 and February 23.

not dated yet? oh my god

reny1966nanin said:
So, OnoD and Ai fairouz's age gap is 15 years old, while OnOD and miyukichi (jolyne's seiyuu in game version) has 7 years old gap
Beside that, Sugita who played young Joseph is same age with Kazuyuki Okitsu who played Jonathan, also Yuki ono who played Josuke aka jotaro's uncle is 6 years younger than OnoD,

I am curious what the art style will be

Ah after a long anticipated wait ! one of my favorite parts

DestinyaZ said:
Do you think how many episodes in this anime?

Aw yeah, we got a lesbian fighting a black man, all while in Florida.

Truly a beautiful moment for mankind.

I wonder if Ai Fairouz has same personality with Miyukichi when she was voiced Jolyne in game version (has angry issue with OnoD, has manly voiced when she shout "ORAORAORA" & her best qoute "YARE YARE DAWA")

JoJo part 6 is being officially announced and it is a official anime adaptation?

Looks cool. I still need to catch up to Jojo tho lol

I am legit so excited for this, Jojo gets better and better each part and word on the street is that trend continues.

This is Made in Heaven. We did it!

ok but I have exam later

That art is fucking atrocious. I hope it's not a reflection of the art quality of the actual anime.

Great News. Part 6 Is Truly Made In Heaven.