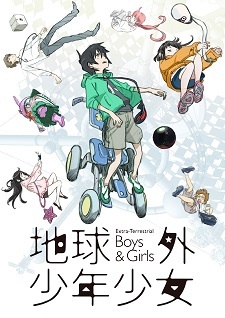 Mitsuo Iso is pening and directing the title at the newly-established animation studio Production +h., featuring character designs by Kenichi Yoshida (Koukyoushihen Eureka Seven). Signal.MD was credited as the animation studio at the time of the original announcement in May 2018. This marks Iso's second directorial work since Dennou Coil 11 years ago.

Commemorating the launch of the official website, Iso posted a promotional video that he created last year using materials at the planning stage. The production is being financed by Avex Pictures and Asmik Ace, among others.

Iso created and directed Dennou Coil at Madhouse in 2007, which won an Excellence Prize at the 11th Japan Media Arts Festival and the 7th Tokyo Anime Awards in the television animation category, the 39th Seiun Award in the media division, and the 29th Japan SF Awards. Iso himself won the Individual Award for the work at the 13th Animation Kobe Awards in 2008.

Synopsis
In the year 2045, Internet and artificial intelligence have become widespread in outer space. Following a massive accident at a space station, a group of children are left behind. Using narrowband and SNS, low intelligence AI, and smartphone-controlled drones, they overcome numerous crises.

Hope that after it airs more people learn about Dennou Coil. Shame that such a masterpiece is nearly forgotten nowadays.

Definitely something to keep our eyes on! I'm glad this project wasn't abandoned.

Finally some news about this. Have been looking forward to it since it was announced. Space anime is always more than welcome.

SeasideLua said:
I remember when this was annonced two years ago. I thought the project died.

It's nice that we finally got news on it again, but it's still another two years out.
I heard that Dennou Coil was in pre production 10 years before it aired so this is just how Iso does things apparently.

I remember when this was annonced two years ago. I thought the project died.

It's nice that we finally got news on it again, but it's still another two years out.

Quite far away but from what the synopsis says this definitely seems interesting. Probably a show to look forward to in the future :)