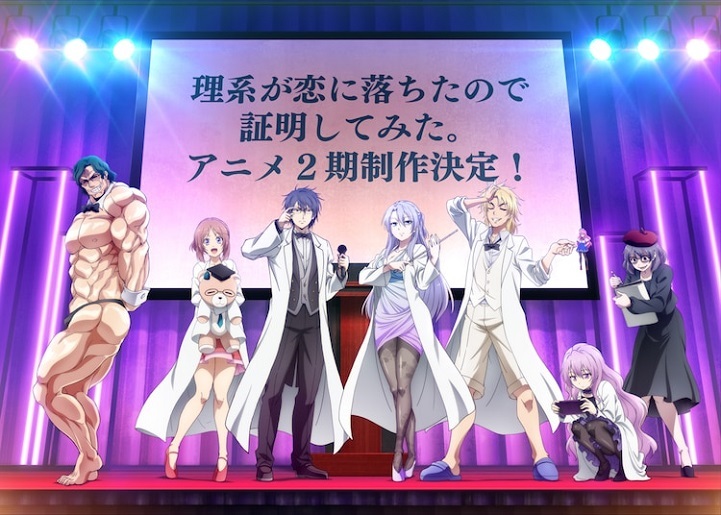 A second anime season of Alfred Yamamoto's Rikei ga Koi ni Ochita no de Shoumei shitemita. (Science Fell in Love, So I Tried to Prove It) manga was announced at the anime's special event on Saturday. The event also unveiled a visual commemorating the announcement (pictured above). 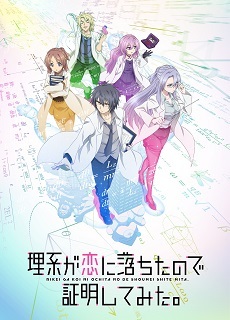 Synopsis
It is widely believed that science can provide rational explanations for the countless phenomena of our universe. However, there are many aspects of our existence that science has not yet found a solution to and cannot decipher with numbers. The most notorious of these is the concept of love. While it may seem impossible to apply scientific theory to such an intricate and complex emotion, a daring pair of quick-witted Saitama University scientists aim to take on the challenge.

One day the bold and beautiful Ayame Himuro outwardly declares that she is in love with Shinya Yukimura, her fellow logical and level-headed scientist. Acknowledging his own lack of experience with romance, Yukimura questions what factors constitute love in the first place and whether he is in love with Himuro or not. Both clueless in the dealings of love, the pair begin to conduct detailed experiments on one another to test the human characteristics that indicate love and discern whether they demonstrate these traits towards each other.

As Himuro and Yukimura begin their intimate analysis, can the two scientists successfully apply scientific theory, with the help of their friends, to quantify the feelings they express for one another? [Written by MAL Rewrite]

The first anime season aired in 12 episodes earlier this Winter. Amazon's Prime Video platform streamed all 12 episodes ahead of the television broadcast on January 11. Crunchyroll simulcast the show with both subtitles and English dub.

Yamamoto originally published the romantic comedy manga, abbreviated as RikeKoi, as a one-shot in Comic Meteor web magazine in March 2016, which began regular serialization in May that year. Flex Comix published the eighth volume on March 12, with the ninth volume scheduled for an October 21 release. RikeKoi has a cumulative 1 million copies of its compiled volumes in circulation.

The manga was adapted into a four-episode live-action drama in September 2018. A live-action film serving as a sequel to the drama series opened in Japan on February 1 last year.

I will definitely watch it, for a science!

First season was pretty average along with forced drama. Despite that I hope second season will be same quality or even better than previous one.

I wasn't expecting this, but I'll take it. Wasn't awful so I will welcome this season 2.

Just finished the first season a week ago and was sad to see the manga is lagging behind with the translation. But this is the best news I got shortly after.

Btw, the english dub was pretty good and helped me watch it while I cooked.

Surprised that this one got a S2, pretty lackluster imo.


chris625 said:
Definitely very surprised this got a second season. But I will definitely watch it, for a science fanatic like me this show was incredibly entertaining and hilarious.
If you were a "science fanatic" you wouldn't enjoy this.

Definitely very surprised this got a second season. But I will definitely watch it, for a science fanatic like me this show was incredibly entertaining and hilarious.

i certainly wasn't expecting this. I started the show and so far its interesting. Will probably watch season 2.

Ok i never expected this to have a second season. And what's up with animes this past years most of them are getting sequels so early. Not that i am complaining.

Very surprised about a sequel, it's one of my favorite shows so I can't wait

A surprise to be sure but a welcome one

Cannot wait to see them once more.

Looking forward to seeing more of Himuro and Ibarada.

Antanaru said:
This piece of shit even sold? Anime market is really weird nowadays.
You're a piece of garbage, you asshole.

Antanaru said:
This piece of shit even sold? Anime market is really weird nowadays.
You're the piece of shit, you asshole.

I really enjoyed the first season, it was just light and fun. Really happy to hear its getting a second season.

_MushiRock11_ said:
Up there among the top in the "Certainly didn't expect this but I'll take it" list.
YES HAHA. Didn't expect to like Season 1, but ending up enjoying it more and more.

Hmm interesting news.
Loved the first season but i felt that it managed to end it really well.
So im curious to see what this new season will bring to the table.