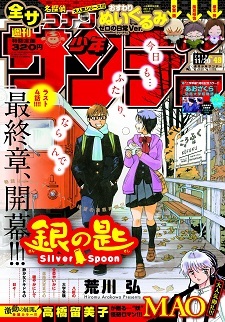 Synopsis
Yuugo Hachiken has spent every waking moment of his life studying in order to achieve the highest grades in school. Finally cracking under the pressure of his parents' expectations for success, Yuugo decides to leave his city life and enroll in the rural Ooezo Agricultural High School. However, he has absolutely no experience with farming!

Attempting to utilize the skills he has built through studying, Yuugo begins to pursue the true meaning of having a dream and perhaps discover his own along the way. But life is not as simple as it seems to be, and Yuugo must learn that hardship may appear when you least expect it. [Written by MAL Rewrite]

The agricultural manga series, which is both written and drawn by Hiromu Arakawa, launched in Weekly Shounen Sunday magazine in May 2011. It recently resumed from a hiatus that was announced in June of last year, but it has since its debut also been on hiatus on multiple occasions. The series has received various awards, including the Manga Taishou Award in 2012, the Shougakukan Manga Award in the Shounen Category in 2013, and as the runner-up in the manga category of Sugoi Japan Award in 2015. There are currently 14 compiled volumes in print, with the latest one released on August 18, 2017.

The series was adapted by A-1 Pictures into two 11-episode television series that aired in Summer 2013 and Winter 2014, respectively. It also received a live-action adaptation slated for Spring 2014.

Yen Press announced at Anime Expo 2017 that the manga series had been licensed for North American release. They have since then released 11 volumes, with the 12th volume scheduled for December 17 of this year. Aniplex USA announced in 2013 that they had licensed both anime series for release in North America.

it aint fun for anybody

Thanks for the source...
She must be mentally and physically exhausted...

It sucks that it's coming to an end, but it's better than constantly on hiatus.

That surprised me, but it's a good thing we can finally read the end of this series. I've always admired its realism and accurate details.

I sincerely wish the best for Arakawa-Sensei and her family.

Glad to see this masterpiece finally ending. Pretty sad to hear about the mangaka's family.

Sad to see this one come back from hiatus, only for it to end soon. That being said, there's not much left to cover in the manga anyways, so this manga can end naturally.

yamiyugi101 said:
apparently the authors husband and kid were very sick with incurable illnesses and that's the reason for the hiatus and she already finished it years ago
uuhh... it was because arslan senki...

I'm praying for this legends family. Bless her for making a great story with the lovable duo, the Elric brothers.

Now somebody please be a sport and adapt the remaining part into anime. Really loved the two seasons.

But have to say the ending is rather sudden.

Heartbreaking but after
MIkage and Hachiken kissing in the last chapter
and with their future career paths more or less settled I think it calls for an end because the whole point of it was Hachiken running away from parents expectations to get into a good college. Now that he's found his passion that is becoming
an entrepreneur dealing with raising pigs
and
Mikage coming out to her family about her passions
both the lead characters have been given justice.

There are still four chapters so I'm expecting stuff about Komaba, Yoshino and few other characters as well. The one who wanted to be a vet and Tokiwa I guess.