Interview: Kinema Citrus Staff Reflect on 'Made in Abyss' 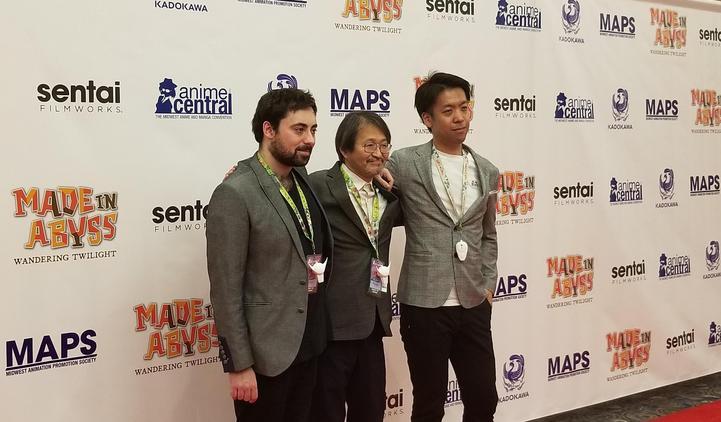 Members of the Kinema Citrus team were guests at this year's Anime Central to present a special screening of Wandering Twilight; during the convention, MyAnimeList had the pleasure of joining a media conference with director Masayuki Kojima, composer Kevin Penkin, and music producer Hiromitsu Iijima.


Made in Abyss is one of the most critically-acclaimed shows in recent memory. On MyAnimeList, it is currently the 21st-highest rated anime of all time. Did you expect it to become so popular in the West, and could you tell us about your reaction to the fan reception here at the convention? 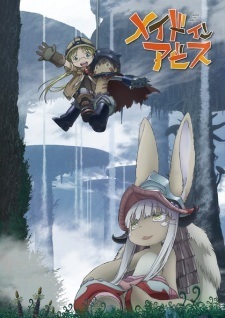 In regards to the compilations films—were there are challenges in compressing the material from the anime into film-length works? Were there any ideas that you wanted to focus on while compressing?

Kojima: When you take a 13-episode TV series and try to turn that into a 90-minute film, you definitely need to make edits. I think the most important thing is to create a single film that can stand on its own. A single film that, even if someone is seeing the story for the very first time, they can understand and appreciate. That's what we tried to do and what we focused on.

In a similar vein to the previous question—how was it, going back to work [on something] that you had already done and getting to take another look at it? Were there any opportunities that arose while making the film to change or improve on things that you did in the TV series?

Kojima: Yes, there were certainly a lot of opportunities. When we were broadcasting the series, we were under a lot of time pressure. Now that we had the opportunity to do this movie, there were some areas where I saw chances to fix or adjust some things for the film.

Iijima: And from a music perspective as well—there were themes that we weren't able to fully take advantage of for the TV series, and so we were able to catch up and be sure to include those. There were actually some unused songs as well that we were able to incorporate into the film.

Penkin: Yeah, when we had the premiere the other night, that was the first time I've actually seen the movie in its entirety. When there were certain tracks that they'd used differently than in the series, I remembered turning to Kojima-san and just being like, "thank you."

Penkin: I felt that the usage of music in the films, especially Wandering Twilight, was a lot more cinematic in nature. It sort of matched a more long-form piece of work as opposed to a 24-minute episode.

What drew you to Made in Abyss in the first place? What made you say "you know what, I want to work on it"?

Kojima: To be honest, it wasn't until the producers at Kadokawa approached me and offered me the director role that I looked closely at the manga—that was my opportunity to sit down and read the manga. When I saw the images and the amazing story, I knew that it would make for a great anime. That made me very excited to work on it.

Penkin: Um... Yeah, I was pretty happy to just have a job. (Laughs) And working with Kinema Citrus on any project has been a great pleasure. So when I was approached for Made in Abyss, I don't think I fully grasped at the time how immense it would become and how important it would be on both a personal and professional level. It was only after I started actually writing for it that I realized how much of an opportunity we had to do something quite meaningful.

Iijima: I also hadn't read the manga at the start. However, when I eventually did, my first impression was that the characters and story were all very well crafted, and I found myself pulled into the world. I also saw it as a challenge and was very excited when we started work. 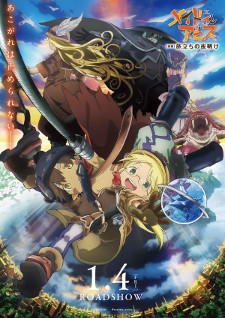 When you have certain projects like this, do you try to follow the mangaka's vision as best you can, or do you take your own interpretation of it and go forward like that?

Kojima: When you turn something from a manga into an anime, you have to create new visuals. There are times where you can't just replicate frame-by-frame what the manga is doing. You can't take a manga-like approach when you're animating. In this case, the quality of the original manga was very high, so I did try to take a lot of inspiration from it. I tried to make as few changes as possible, but at the end of the day, it's my job to take what's appealing and exciting about the manga and bring out those same feelings for the viewers of the anime. I tried to preserve those values—that is, the values and feelings that I saw in the manga—and bring them to the screen, and I hope I was successful.

You see food in the anime as a social and bonding experience. And so for you, while you were working on this project... What was your comfort food?

Kojima: (Laughs) This answer is completely unrelated to the animation, but I am Japanese, and so I love sushi.

Penkin: My flatmates back in London know this, but I go through phases of creating different foods. I had a bread phase where I made bread, and then I had a paella phase... That was a fun one. I also had a curry phase and stuff, so I can't remember what phase I was in when I was writing for Made in Abyss... Actually, I think it was the paella phase. So I was making a lot of paella, which is awesome. Yeah, I stress eat as well. (Laughs)

Iijima: Before some of the recording scenes, we would go to Kevin's place and eat his cooking.

Penkin: Oh, right. I had a risotto phase as well.

Iijima: It was a very good experience.

Penkin: Yeah, when you've got to record a lot of music quite quickly, sometimes it's good to get the musicians over to your house the night before and basically wine and dine them, to explain the music before you get into the session. It's almost like bribing them with nourishment.

Iijima: Very good nourishment, though. And to expand on the answer... Dandan noodles, as well as Chinese knife-cut noodles, were very popular among the staff while we were making Made in Abyss.

If you lived in the world of Made in Abyss, in the town of Orth, do you think you would be a Cave Raider yourself? If so, how deep into the Abyss would you be willing to go?

Kojima: I think one of the great things about being a creator is that you can portray scenes and things that you normally couldn't do in real life. I haven't really gone there and thought about what I would do in that kind of situation, but to be honest... I would probably be happiest just staying in Orth.

Penkin: I'm originally from Australia, and the first layer—the first level—has a lot of greenery, sunlight, and spiders. It's pretty close to what I'm used to. I think as long as we have a decent setup, and kind of just relax and occasionally run into a [spider]... well, not that I actively look for spiders, but I'm used to them. So I would just chill out at the first layer.

Kojima: Actually, now that I think about it... I'm afraid of heights, so I probably wouldn't be good in Orth either! (Laughs) 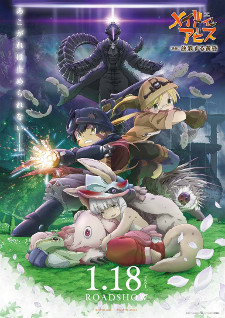 Penkins: I'll expand on that a little bit. Made in Abyss, in my opinion, has a lot of juxtapositions. And I've always been very interested in the matching of music that traditionally would not go with a scene that... well, for example, there's this game called Shadow of the Colossus. The final battle, which should be the biggest, most high-tension battle of the game, uses a very slow piece of music. Applying that idea of basically matching music to a scene where the music is not inappropriate, but goes against your expectations of tempo, for example, is one that I find quite interesting. So in the... apologies, I'm going to spoil episode 13 a little bit, but there's a scene where Mitty and Nanachi are in an elevator. Originally, I had thought of suggesting music that was quite aggressive, distorted, and fucked up in nature for that scene—a track called "Crucifixion." Instead, they ended up using a track called "Forest of the Abyss," which is incredibly ambient and just features a solo cello, against what is inherently quite a violent scene. That sort of juxtaposition I find quite interesting, and I thought it was infinitely more effective than just being like "this is scary, let's do scary music." It kind of gave it a bit of depth.

Were you, at any point in production, brought to tears by the story of Made in Abyss?

Kojima: Not during production. I saw the show so much as it was being put together—all 13 episodes as they were coming together with the imagery, the rough cuts, dubbing, and the music—that I really didn't have time to cry. My head was in a different place at that time, a creative one, while I was working on those episodes, and there wasn't really room for an emotional response. However, when everything was complete and I saw the final edit of the video... That's when I did cry a little, but only just a little. (Laughs)

Penkin: There are these great online reaction compilations, of episode ten, episode 13—people go on there and videotape their responses, and that's like their channel. Some of these people did not handle those two episodes very well, and I have to admit... I kind of smiled. (Laughs) Yeah, I might be taking a slightly more cynical approach to this, but, you know. It's in a very, schadenfreude-esque kind of way, quite gratifying to see that someone's being... what would be the word... "aggressively" affected by work that you're involved in. It's like, "I did it!"

Iijima: I also saw the series so many times that I felt like I didn't really have the time to cry. However, there is this scene in episode 13, where Nanachi looks back. In it, the animation and Nanachi's expression... It's so effective, like a person is really there, acting. I really felt like I was going to cry after watching that scene.


Interview was conducted through an interpreter and has been edited for clarity.
Anime CentralStaffInterview

Laughed during the little dine and wine bit, no wonder why the music was so effective here. I wasn’t planning on giving the recap movies a shot but I think I really ought to now and I’m looking forward to the sequel Movie. I really hope there will be screenings outside of Japan too!

Whaaaat. Crucifixion would have been perfect for the elevator scene tbh

Please screen the january movie outside japan and NA...

Nice interview, they definitely managed to bring the feel from the manga over to the anime.

Man 'Crucifixion' is such a brutal track, it would've really doubled down on the already brutal elevator scene lol

I was originally gonna skip the two movies since I'm not too big on recap movies, but after reading this I'll definitely check them out. The OST is such an amazing part of the series, so I'm interested how they changed things up.

Still have as of yet to finally get around to watching Made In Abyss at some point, lol! ^_^