Cast Announced for 'Sora no Aosa wo Shiru Hito yo' 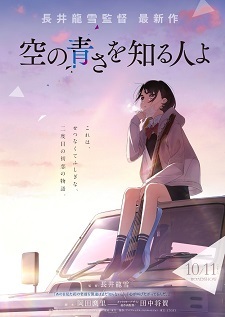 The official website for the previously announced Sora no Aosa wo Shiru Hito yo original anime film announced cast members on Tuesday. The film will premiere in Japanese theaters on October 11.

Set in a town in the mountains, the story revolves around two sisters, Aoi and Akane, and Akane's ex-boyfriend Shinnosuke Kanomura. Ever since the death of the sisters' parents 13 years ago, Akane has been taking care of her younger sister and gave up her dreams of moving to Tokyo with Shinnosuke.

Aoi, who is now in high school, dreams of becoming a musician. She is invited to perform at a festival by the famous singer Dankichi Nitobe. Shinnosuke then returns to the mountainous town and at the same time, a mysterious boy who goes by Shinno also appears. As Aoi and Shinno make eye-contact, could it be love at first sight?

Tatsuyuki Nagai (Ano Hi Mita Hana no Namae wo Bokutachi wa Mada Shiranai.) will direct the film and Mari Okada (Sayonara no Asa ni Yakusoku no Hana wo Kazarou) will pen the scripts. Masayoshi Tanaka (Kokoro ga Sakebitagatterunda.), who is the chief animation director, will also design the characters. The trio, who call themselves the Chou Heiwa Busters, are collectively credited for the original story.

Okada-sensei scenarios are increasingly beginning to resemble a mix of Naoko Yamada and Shinkai. I thought the plot would be about four teens, but instead, it turned out to be an even bigger youth drama than I thought.

this sounds like it could be a very good anime movie

Well, this is certainly much different than what I initially expected it to be. Love triangles aren’t my thing either but I’ll definitely give this a go nevertheless!

just another tasteless love triangle by the Ntr queen
skip

This reeks of awkward love triangles forming. Not expecting great things romance-wise, if Anthem of the Heart told me anything is that best girl (or boy in this case) is definitely gonna lose. It's made by the same AnoHana team ffs

EDIT: ANN's synopsis explains why
The film's story is set in a town nestled in the mountains. It centers on second-year high school student and aspiring musician Aoi Aioi, her older sister Akane Aioi, Akane's ex-boyfriend and struggling guitarist Shinnosuke Kanomura, and Shinno — who is actually Shinnosuke from 13 years ago after traveling from the past to the present.

Aoi and Akane's parents passed away in an accident 13 years ago, and Akane gave up her ambition of going to Tokyo with Shinnosuke to take care of Aoi. Since then, Aoi has felt indebted to her older sister. One day, she is invited to perform at a music festival as a session musician by a famous enka singer named Dankichi. At the same time, Shinnosuke returns to Aoi and Akane's town after a long time away. Then, Shinno mysteriously appears, and Aoi falls in love for the first time.

EDIT 2:
Nagai also noted that the film will center around the relationship between four people.
here's hoping I was wrong before and it chooses to focus on Akane - Shinnosuke and Aoi - Shinno seperately