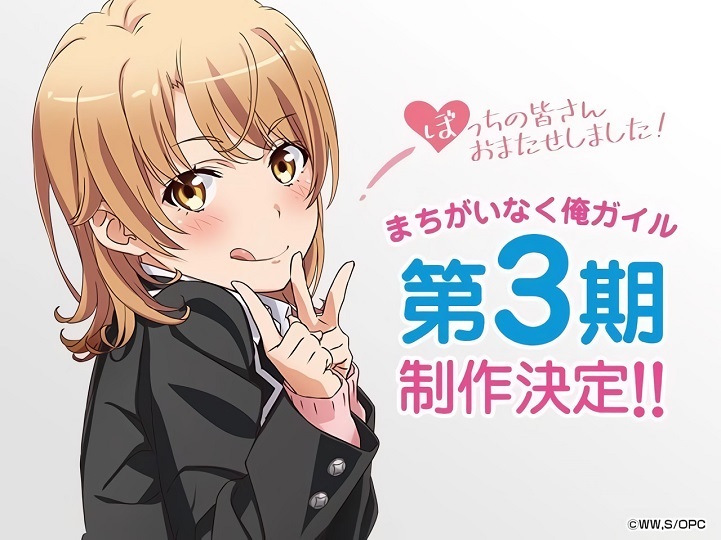 Watari began penning the romantic comedy series, also known by its short name Oregairu, in 2011 with illustrations by Ponkan 8. The novel began its final chapter with the 12th volume in September 2017. Publishing label Gagaga Bunko plans to ship the 14th and final volume on April 18. Oregairu has a cumulative 9 million copies of its volumes in print worldwide.

Yen Press began releasing the light novel in English in 2016 under the title My Youth Romantic Comedy Is Wrong, As I Expected. The seventh volume went on sale on February 19.

Oregairu ranked first in the annual Kono Light Novel ga Sugoi! poll of readers and industry insiders for three consecutive years between 2014 and 2016.


Update March 23
The Marvelous booth at this year's AnimeJapan event unveiled an announcement preview for the third season on Saturday.

I'm almost in tears right now, I'm so happy, I CAN'T WAIT FOR THIS, WHEN IS THE RELEASE DATE??

Hell yes! I'm too impatient for this...

I was sooo happy when they said there was going to be a season 3. Well because i almost cried when the second season was over.soo yea

wouldve probably been hyped if this was when this show was still relevant to my taste, but ill still watch it for the MC.
Todayloveday Cabsauvwine

Wow I just realize it today, but well it's good cause I don't like riding a hype train for a long time! Let's Go!

wew a March news, didn't even know about this until now.. Great news but I am kinda worried about it, season 1 was nice but season 2 was kind of whatever.. it's getting more and more edgy for no reasons at all, making everyone hate the protagonist "just as planned" like human emotions can be manipulated that easy like it's one-dimensional. Hopefully the story actually progress and not stagnant because they want to drag out the story for god knows how long.

Go Yukino! Get your man,best girl.

I watched the first season and I really like it. Third season will be great but I need to watch first the season 2. Anyway, I would like to see more of Totsuka hoho

after 3 yrs of waiting i can't wait to get a 3 rd season, my guess they are doing it now because of the L/N is finishing.

this anime deserves a good finish

Some embarked on this ship as deckboys... when this ship touches land in season 3... we'll all be boys again... and come back as better men.

Cannot wait for the next (and most likely last) season!
Give me some Hachiman and romance.

That thumbnail on the anime page just SCREAMS waifu bait... whatever happened to 8man just curving these thots?