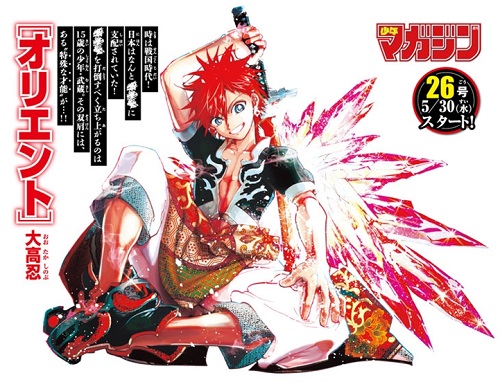 This year's 18th issue of Kodansha's Weekly Shounen Magazine released on Wednesday has announced that Shinobu Ohtaka will begin a new manga serialization. Titled Orient, it will start on the 26th issue of the magazine to ship on May 30.

The manga will be a themed "a never-before-seen Japanese fantasy" set in the Warring Japan period. A 15-year-old red-haired boy with a special talent named Musashi will be fighting against a group ruling the said period.

Shinobu Ohtaka is popular for serializing the Magi series, in which both the main and prologue series received anime adaptations. The main series was serialized via Shounen Sunday between June 2009 and October 2017 for a total of 37 compiled volumes. The prologue series featuring the character Sinbad has been serializing via Ura Sunday since May 2013 with 17 currently compiled volumes released, with the latest went on sale on February 19. Ohtaka also serialized Sumomomo Momomo: Chijou Saikyou no Yome via Young Gangan between January 2004 and February 2009 with a total of 12 compiled volumes.

lvl22 said:
Aladdin with red hair. Seems pretty unoriginal.. but I did enjoy Magi (up until the time skip), so I look forward to it.
lo i was thinking the same thing idk why but im hype for it now

Not going to read this (at least not right away) since her previous series was way too disappointing for me.

I liked Magi up to a point, then it kinda got boring. Felt like Ohtaka was taking the story in a direction I didn't want it to go. Hopefully this will be different.

That being said, that seriously looks like a red-haired Aladdin. The story doesn't really sound all that original either but I'll wait and see how it turns out before criticizing it.

This is good news, but unfortunately I do not think it will reach the level of the Magi because the events and even the characters were more than wonderful and can not be repeated or there is something like it :(

Wonder where I've seen that story before.

It was to be expected, but I'm still looking forward to it.

Well if this isnt the most unique manga story and art wise.

Looks at the main cover page image, sees Kiss and Cry, big thumbs up. So happy it's getting serialized.

Magi was good (at least for me), but looking at the cover, I don't feel like reading it.

We are truly blessed! I'll definitely check it out.

Omg I've been so sad after Magi manga ended :(( This made me happy! I'll definitely check it out

Eh happy for her that she's starting a new series

But I think I'll be skipping this one even tho I'm a historical fan and especially of that period.

lvl22 said:
Aladdin with red hair. Seems pretty unoriginal.. but I did enjoy Magi (up until the time skip), so I look forward to it.

He kinda looks like he's the offspring of Aladdin & Morgiana.

Aladdin with red hair. Seems pretty unoriginal.. but I did enjoy Magi (up until the time skip), so I look forward to it.

Yeah, never saw that before.