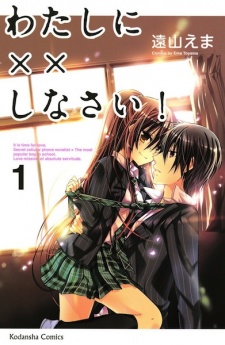 It has been announced that Ema Tooyama's Watashi ni xx Shinasai! (Missions of Love) shoujo manga will receive both a live-action film and TV drama adaptation. Toru Yamamoto (G'mor evian!, Neko nanka Yondemo Konai. live-action) will direct the live-action adaptations and Ayako Kitagawa (Prison School) in charge of the screenplay. Tina Tamashiro (Sakurada Reset) and Yuuta Koseki (Donten ni Warau) will star as lead characters Yukina Himuro and Shigure Kitami, respectively. The TV drama will begin its broadcast this Spring, while the movie will premiere in Summer.

Watashi ni xx Shinasai! was serialized in Kodansha's Nakayoshi magazine between May 2009 and September 2015 for 19 volumes, and has over 2 million copies in circulation. The manga won the 36th Kodansha Manga Award for best children's manga in 2012. Kodansha Comics USA licensed the manga for North American release and published the 14th volume in May last year. The manga follows the love story of Yukina Himuro, the person behind the well-known cellphone novelist Yupina.

Oh thanks. I couldn't get through the drama. I already realized that. I should've cleared up what I was saying.

CatEatYourPizza said:
I watched some of the live action. It was shit to me. In the adaptation, there’s no blackmailing or anything. It’s just the MC playing a dating simulator called Missions of Love. It’s almost like the Death Note live action. I dropped it.

Better late than never, so I'll answer this :)

What you watched was a 4-episodes drama doing some kind of promotion of the movie. The real Live Action adaptation will be the movie.

the manga was shit. but this is worse than the manga, which was already shit. Get that?

CatEatYourPizza said:
I watched some of the live action. It was shit to me. In the adaptation, there’s no blackmailing or anything. It’s just the MC playing a dating simulator called Missions of Love. It’s almost like the Death Note live action. I dropped it.

I watched some of the drama. It was shit to me. In the drama, there’s no blackmailing or anything. It’s just the MC playing a dating simulator called Missions of Love. It’s almost like the Death Note live action. I dropped it.

>the right to preach someone about moral
> Love Live Sunshine
>Anime


Okay, now I'm done. Just for curiosity's sake, when and where do you preach such teaching, I'd like to be enlightened if you don't mind.

Everyday at 3 PM CST to 7 PM at my twitch channel https://www.twitch.tv/femfreq. Be sure to bring your own Bible, and our snack guy has been off for a couple weeks now thanks to a leg injury, so do you mind if you bring some snacks? Some pudding cups (chocolate), and graham crackers would do. Make sure to bring enough for 16 people. Thanks in advanced.

Finally one of Ema Tooyama's work get an adaptation... I was a fan of her art back then. More of a fan of her more innocent work Koko ni Iru Yo though, it was the one that made me want internet friendship back in my teenage year. It was great that xx Shinasai series has lasted so long since the time I read it. The art was great, too bad it will be Live Adaptation.


My favorite character is Akira since he was really kind to Yukina and really cute long live white-haired guys!! nah, he won't be white-haired since it's live adaptation.

Ehh, not anime adaptation but instead live-action? Very interesting.

>the right to preach someone about moral
> Love Live Sunshine
>Anime


Okay, now I'm done. Just for curiosity's sake, when and where do you preach such teaching, I'd like to be enlightened if you don't mind.

I remember reading this manga a few years ago. It felt pretty average after it ended to be honest, I lost my interest for this series since. Good for the fans though.

Edit: I forgot to mark this manga as complete since there were the special chapters since lol

Really? Couldn't they have picked a better shoujo manga to adapt?

I remember reading it a few years back and then dropped it at around chapter 30 because of the female MC + other reasons, though I don't really remember the story that much except that it was bad.

thx god this will not be an anime adaptation

Eww Live Action, The epitome of cringe. Also Best Childrens Manga of 2012? Damn, Teaching them young generations there that's its alright for blackmail, and borderline molestation.

This is the type of show that fits live action, Why ? cause its sounds as bad as it could.

oh god please no... you get retard female MC character that supposed to be "master of romance story" (lol) then nearly rapist with dark flashback justifictation (lOl), 3 (yes, fucking 3) 3rd wheel character (because how steady main pairing relationship), hopeless cousin (lOl), then perfectly useless overly positif girl childhood friend male MC (lOl), and male MC borther overly competitive jealous want to stole female MC just because (lOl)... i drop it when already reaching 60's chapter or so when they almsot had sex and still "nah, we are doing this for misson" and both still denial... annoying me to no end... even after all of those years, still piss me off... how is this got awards in children section is beyond me... there is tons better shoujo to adapted, and they prefer this? really? really? yeah, pass....