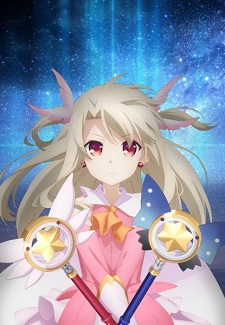 It was announced via the Fate/kaleid liner Prisma☆Illya Movie: Sekka no Chikai Machi★Asobi Vol.19 event on Saturday that a sequel for the franchise is in production. More information will be announced at a later date.

Fate/kaleid liner Prisma☆Illya is based on the manga written and illustrated by Hiroshi Hiroyama. The series was first adapted to a TV anime in July 2013, with a new season premiering for four consecutive summers since, each produced by Silver Link. The movie premiered on August 26.

And here I am just wondering if it will ever be even added to database, let alone air.

The only Fate that is actually worth watching.

More fate/kaleid is always welcome for me.

From what I know it doesn't really have a lot of material, though they can work it out... I think they can be able to do so since they did well with the previous seasons, though 3rei was more of "to an extent" because of production issues on the hand.

I have yet to progress from here the movies adapts the manga, but nice nice.
More Prilia is always welcomed!!

I am wondering why Illya doesn't get her own Fate route and hook up with Shirou.

Haven't caught up with the manga since the last arc concluded. Maybe It's about time.

Tarotist said:
Fate/kaleid liner Prisma Illya 4ier? I guess I'll watch some more. I hope they change it up a bit though since the series is beginning to get stale for me...

Since its still adapting 3rei it will most likely be 3rei SomethingSomething, just like 2wei was adapted into 2wei and 2wei Herz.

4ier will most likely happen when 3rei manga ends and 4ier begins.

boy, I'm so freaking excited. But, I'm curious about the adaptation since it has 10 chapter so far. Nevertheless, I'm looking forward to it.

Not a surprise the best Fate series would get another season.

Very excited to see more Fate/Kaleid, I hope it follows in the same steps of 3rei.

Fate/kaleid liner Prisma Illya 4ier? I guess I'll watch some more. I hope they change it up a bit though since the series is beginning to get stale for me...