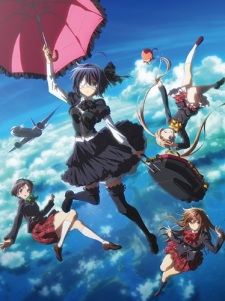 The movie will feature a new story where Yuuta and Rikka are on their third year of high school. One day in Spring, Touka declares that she will take Rikka to Italy with her, as her job has stabilized there and thinks they should migrate together as a family. Touka is also worried about Rikka not being competent enough to advance to universities in Japan. The gangs from the club suggested Yuuta, who doesn't want to be separated, to elope with Rikka!! A runaway drama throughout Japan begins.

Chuunibyou demo Koi ga Shitai! is a light novel written by Torako and illustrated by Nozomi Ousaka, and has been publishing under Kyoto Animation's KA Esuma Bunko imprint since May 2011. The light novel inspired two TV anime adaptations in Fall 2012 and Winter 2014, as well as a movie summarizing the first season in September 2013.

I don't like the romance in this series. its good anime to watch btw

Can't wait for it.

danggg been waiting for this forever. very excited

Well I guess since they're making a movie, that means no season 3! :'(

Holy shit, how did I not know about this before? Hopefully it's not mostly recap like a lot of anime movies...

Still waiting for season 3 announcement though. I guess it should wait for a while.

Lol, can't even blame myself on how I really love this series.

Now I hope they can make Hyouka movie or something. I really miss that show

They better kiss at the end this time I wanted that kiss in season 2 and now it's been four years I NEED TO SEE IT!

What are they going to hug instead of holding hands?

Yea boi! Very excited for this.

Whoa, Yuuta and Rikka are going to be third-years, huh?

I liked Satone in S2. I see I'm in the minority here. Although I didn't ship her with Yuuta, I thought she was cute. Lemme slink into a corner of shame.
All I can say is that it better not be another recap film.

Also, hate to ask for the thousandth time KyoAni, but more Hyouka when?