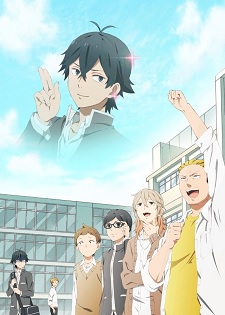 The official website of the Summer 2016 anime Handa-kun has announced the main voice cast and production staff of the series. The first promotional video for the series has also been uploaded on the official YouTube channel of the TBS network.

Handa-kun is an adaptation of the manga series by Satsuki Yoshino, which will end its serialization next week in the July 2016 issue of Shounen Gangan. The series is a prequel set six years before the events of Barakamon and tells the story of calligrapher Sei Handa during his time in high school.

Handa-kun will air on Fridays at 1:58 a.m. beginning July 8 on the TBS network, followed by CBC, MBS, BS-TBS, and TBS Channel 1. It will also be streamed on the Docomo Anime Store platform.

people have forgotten that onod and suwabe voiced Kuroko no Basuke just recently and they did perfectly fine.

(though they had more serious characters, but well, come on).

Monochrome Factor was also waaay too fine bc of OnoD.

Ono D CAN voice teenagers and high schoolers. Same with Suwabe Junichi-- Takeshi from High School of the Dead? He can be higher pitched if he wanted to. They're both versatile actors. Quite sad they had to change them both. I can never see Shimazaki as Handa.

The PV looks okay. I like Nobunaga Shimazaki but I think having OnoD would have been better.

:/:/ I'm so offended! Where's my Ono D! Aside from the fact that I super LOVE the manga the other factor that made me over excited about the anime adaptation was because of friggin Ono Daisuke! I even opened this news post with excitement ready to add a comment about how awesome it would be to hear him as Handa again. Pthegh! Such annoying news. It won't be Handa Sei without you Daisuke chwan T_T!!!
Did they have to go with this studio?? I would have rather waited a million years and have them do this on a scale big enough to afford the original voice actors than for them to do it half-baked now. Sigh...

They should've changed the studio not OnoD.....

Do not have high hopes.

Rayzer said:
scytheavatar said:
I don't understand all this talk about Ono Daisuke not being able to voice a teenage boy, have people forgotten he voiced Itsuki in Haruhi? I don't see anything wrong with him using the more mature voice in Barakamon either........
Except it's years ago.
Except that Ono Daisuke reprised his role of Itsuki Koizumi in Nagato Yuuki-chan no Shoushitsu, which aired just last year, and he was as perfect as ever as Koizumi.
It's true that he now tends to voice older characters with rougher voices, BUT he can still play soft-voiced teenagers just fine, even at 38 years old.
His acting skills just got better, his voice-acting range became wider with time and experience.
I guess they didn't keep him, nor Suwabe Junichi, not because they weren't fit to voice their characters, but because the budget for this anime was probably too low to hire 2 A-grade seiyuus.
The currently-airing Mayoiga from the same studio, for example, has mostly newbies or not so popular seiyuus in the cast (with the exception of maybe Suzuki Tatsuhisa).

scytheavatar said:
I don't understand all this talk about Ono Daisuke not being able to voice a teenage boy, have people forgotten he voiced Itsuki in Haruhi? I don't see anything wrong with him using the more mature voice in Barakamon either........
Except it's years ago.

OnoD could've done a younger Handa easily :/
And the studio doesn't have the best track record, especially this season. At least the source material is good...

I'm done with life right now, I was so excited for this

BUT we don't even get our baby Ono to voice Handa T.T

This is stupid. It's not like OnoD can't play a teenager. Just listen to him as Jyushimatsu and how childish his voice is then.
I was really looking forward to this anime since i like the manga.
I guess i'll just stick to the manga then.

Terrible cast change. Why no OnoD? Even if people say he's not suited for teenagers, which I think he is, he can do Handa's screams better than Nobunaga Shimazaki could ever. The manga is super funny so it's a good thing I read it cause watching Handa kun is going to disappointing. But Suzuken singing the ending? So conflicted, but that won't save the anime for me.

I'm not happy with the changes.

I don't get why they needed to change Handa's voice actor. It's not like Ono Daisuke never voiced teenage characters before.

Damn at the lack of Ono Daisuke. He really made the character for me back in Barakamon.

I'm not happy with the change of the seiyuu xD
but I didn't know the manga is going to finish next month!
too bad the subbers are late!

M00ner said:
Yay! Can't wait! So it doesn't really matter if I haven't watched Barakamon yet and instead watched this first?
i dont see any problem to do that, but i Dont see why either... barakamon is only a cour series and easy to binge..