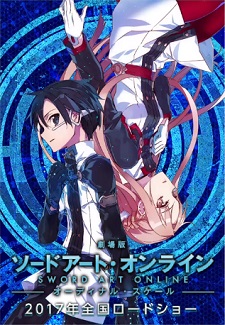 Aniplex will begin selling tickets for the movie at AnimeJapan 2016 at the end of March. Each ticket costs ¥1,500 and comes with a bonus B2 poster of the movie's key visual (pictured). Author Reki Kawahara and the movie's producers are also scheduled to attend Sakura-Con in Seattle on March 26 to provide more information.

Tomohiko Itou returns to direct the movie at animation studio A-1 Pictures. Animator Shingo Adachi is once again adapting the original character designs by abec, while Yuki Kajiura is composing the music. An official website has opened with more information on the setting of the new work.

Story
AR (Augmented Reality) Type Information Terminal "Augma" is a next-generation, wearable multi-device that looks like a pair of small headphones. In terms of size and portability, it is far superior to the existing VR machine Amusphere. Augma doesn't have a full-dive function; however, its AR function is greatly enhanced to compensate for it. It can transmit visual, audio, and tactual sensation data to players while they are awake, thus enabling the users to enjoy fitness and health management like a game.

Ordinal Scale is an ARMMORPG that was designed exclusively for Augma. Following its release, it has become the most discussed game due to its advanced technology. In this game, players can raise their rank by collecting items that appear in various places in the real world and by defeating monsters. This "Ranking System" is the main feature of the game, and in this system, each player's status is determined by their rank which is indicated by an ordinal number instead of a cardinal number. As the result, high ranking players are given overwhelming power, and often rank has become a major factor in deciding the outcome of a PvP battle.

FT_anime_fan said:
Otaku1205 said:
Is it coming in sub or dub versjon?
It be crap in any language.
English sub is good but I don't like a dub! I think there will be sub

Someone put a link for this without crating a new account. The heck I don't have any credit card. What's with them .~. Btw it seems good not shit like they were saying before the launch.

Otaku1205 said:
Is it coming in sub or dub versjon?
It be crap in any language.

I know SAO is a lot of people first anime, but still, how has it lasted this long. All it's ideas a from other better shows and its still going?

We got other popular shows that are lucky to get more than one season.
No game no life
The devil is a part timer
Nichijou
Spice and wolf

Is this maybe prequel to season 3?

Is it coming in sub or dub versjon?

Better be good.. I'm a fan of SAO.
http://www.alluc.ee/stream/sword+art+online

It'll hopefully be better than the new Accel World movie, I haven't seen it, but the first 40 minutes is just a recap and the movie itself is set after the recent novels, confusing the fuck out of the people who only watched the anime.

The new SAO movie better not also have half of it be a recap like the Accel World movie or over an HOUR like Extra Edition was, THAT "movie" was a waste of time. What was the fucking point of them?

I am super excited about this! Despite all of the hate it gets, I love Sword Art Online.

Just to clear things up.

SAO Ordinal Scale timeline will be after Gun Gale and before Underworld. It is also announced that SAO s3 will arrive before Ordinal Scale. I might be stating the obvious since we all already see the characters and Shinon is there but Im just saying . Yes its 2017, I know it sucks to wait but seeing the SAO UW is coming out before the movie, it should keep us occupied for the time being. My prediction is that the movie will release some where mid year but if we're lucky then early year

I hope they finally fuck. :L

Don't watch if you don't like the series . It's simple (unless you're a masochist? :p) .

Don't watch if you don't like the series . It's simple (unless you're a masochist? :p) .

Will watch for Asuna. (hope she's actually in it this time... more likely Kirito will get a new harem member...)

Kuma said:
Phxlippe said:
OH GOD NO WHY IS THIS HAPPENING
because why not??
please god help us all

Phxlippe said:
OH GOD NO WHY IS THIS HAPPENING
because why not??

OH GOD NO WHY IS THIS HAPPENING

Well I'm really interested in watching this in 2017 but when would it be put on crunchyroll,...? Because its an movie so I thought it would take atleast half a year to be blu-ray or just dvd published.