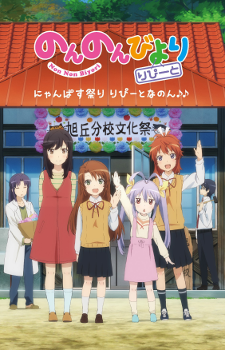 The limited edition tenth volume of manga Non Non Biyori, which will be released on September 23, will bundle a new OVA of the series. The announcement was made at Sunday's Nyanpasu Matsuri Repeat nanon♪♪ event, held at Hibiya Public Hall in Tokyo.

Sentai Filmworks acquired both TV series for North American release. They were also simulcast on Crunchyroll.

Really hoping to get a third season

well, that is a good news but i prefer a new season :D. can't feel the enjoyment if it will only be just one or two episode of OVA. will there gonna be another season ? i hope it get another season.

Did they grew up in the Manga? A time skip or something like that?

Really happy to hear this, now just have to wait for a 3rd season.

A season 3 wouldn't hurt tho.

More NNB is never a bad thing. And a day before my birthday, too. If someone subbed it straight away, that'd be an excellent present., :)

I need more NNB in my life.

Quick question, what are the chances of a 3rd season? I mean I loved this show, but people have been telling me that 3rd seasons in anime are really rare...

Oh, fantastic. I can't believe I didn't hear about this sooner.

Thanks for mentioning it.