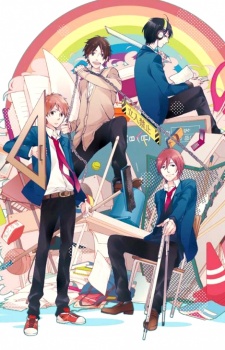 A TV anime adaptation of shoujo manga Nijiiro Days (Rainbow Days) has been green-lit, according to this year's September issue of Shueisha's Bessatsu Margaret. The series is both written and illustrated by Minami Mizuno and began publishing on January 13, 2012. According to the announcement, the cast will be the same as the drama CD adaptation. Some information related to the staff has also been revealed, and an official site will be opened next week.

Synopsis
The series details the lives of four main characters named Natsuki, Tomoya, Keiichi, and Tsuyoshi. They spend their days trying to have fun by finishing their studies and debating about romance. Natsuki, one of the main characters, has a crush on a girl named Anna at school, while others often get involved in their relationship.

love mal and its double standards
Maybe it's generic because it's girls.

Just read the manga, definitely looking forward to this.

I saw how they look like in anime. They are hot <3
Btw, Nijiro days is romance. If MAL didn't add it, that doesn't means it's a gay show. But I really wish it was Bromance T^T

I was hoping this would get an adaptation, it's one of the better shoujo's out there and it's centered guys instead of girls.

And how am I not surprised that people are mistaking this for a yaoi? It's pretty far from that however.

"Cute boys doing cute things"? I don't recall anything the guys do as cute personally. Often hilarious, but hardly cute.

I just hoped knew this would be adapted to anime one day when this series was debuting! ｷｬﾊﾊ((〃∀〃人〃∀〃))ｷｬﾊﾊ Glad that I didn't put this off for nothing. I'm worried about whether the voices will fit for me, though (didn't listen to the drama CD/vomic yet, either).
Anyway, finally some proper refreshing x youth x boys (b'∀'[cute boys doing cute things]'∀'d) series in anime format...

mayukachan said:
Vashavi said:
Looks pretty Yaoi to me.
Yeah, all shows with only one gender in the main cast must be homosexual!
However, this would also be a favourable outcome!

I think the only representation in this manga is that girl who likes the girl Natsuki likes (is this a spoiler?? I mean it's blatantly obvious how she likes her) but she'll probably end up falling for that guy which... bothers me a lot. I feel like that's a thing that happens a lot :/ (in manga/anime, that is. The girl who also likes girls ends up either a) being sidelined or b) just... falling for another guy which is sad))

mayukachan said:
Vashavi said:
Looks pretty Yaoi to me.
Yeah, all shows with only one gender in the main cast must be homosexual!

Vashavi said:
Looks pretty Yaoi to me.
Yeah, all shows with only one gender in the main cast must be homosexual!

I will look forward to it.

Zeroskye said:
Matsuoka being Natsuki really does not sit well with me. Natsuki is supposed to be innocent, naive, and adorable. Matsuoka's voice just isn't that. It's always deep and the thought of his trademark scream coming from Natsuki just irks me.
My thoughts exactly. I really don't know why they cast him as Natsuki :/

Edit; it would have made more sense if Matsuoka and Shimazaki changed roles x)

This anime doesn't look like it's much fun, but the manga's almost got an 8. I guess I'll just add it.

Yay can't wait - if adapted right should be an enjoyable watch :)

mayukachan said:
I don't think Shirayuki is that great of a show though? It's a decent slice of life but it gets stale after a while. AkaYona is definitely an 8/10 like Kimi to Boku, though for being powerful.

As long as this series can manage to be a great slice of life and calming show, it'll be worth the watch, I find.

I agree, about Shirayuki, AkaYona and Kimi to Boku. Shirayuki's characters are pretty bland. AkaYona excels a lot in characters, and those characters make up for the slow/somewhat generic plot. If the Nijiiro Days anime can retain the charm of the manga, it'll be an amusing slice of life. Like Kimi to Boku., it doesn't have a set plot, but the characters are really endearing and unique.

I'm worried about Matsuoka trying to portray the vanilla Nacchan though. I guess I'll watch the Horimiya OVA's and see if he's any good. I guess his voice as Yukimura from Aoharu could be considered "innocent," but I don't like his voice there. Aughhh well I'm hoping for the best. Complaining won't change the voice actor. ;_;

I always thought Kamiya Hiroshi would be perfect for Keiichi's role though...