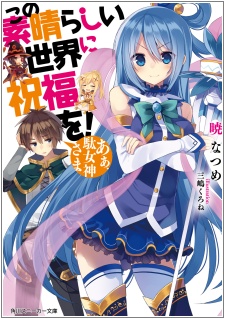 The official website of light novel Kono Subarashii Sekai ni Shukufuku wo! announced that the series will be receiving a TV anime adaptation.

The series is written by Natsume Akatsuki, with illustrations by the artist of spin-off manga Hataraku Maou-sama! High School!, Kurone Mishima. It debuted in October 2013, and as of February 2015, has 6 volumes in print. In September 2014, the series received a manga adaptation by Masahito Watari, which is currently being published in the shounen magazine Dragon Age.

Synopsis
Kazuma Satou is a shut-in who loves game, his life ended suddenly... Appearing before him is a beautiful girl claiming to be a goddess. Kazuma, who was transported to a different world, worked hard to earn a living! Kazuma wanted to live a stable life, but was burdened with problems caused by the goddess he brought along to the different world with him. He was even targeted by the demon king's army?! (Source: Baka-Tsuki)

Absolutly emberassing how so many people dismissed the show purely based on a synopsis and the studio in charge of the animation.

I really hope those have learned a lessen and try to be more positive in the future.

Wow, looking back (I mean I guess it's expected), people really didn't think well of this anime. There were a lot of red flags

I guess the biggest lesson for me is to not judge a LN by the synopsis alone... It could turn out to be good. On poster was straight up right about not judging it by the cover, and look what we have now. Can't wait for season 2

Damn... this thread is old! Can't believe anyone actually put so much negativity on KonoSuba... (oh wait.. I did too in a different sub-forum... well not a lot... a bit...)

So I guess DEEN really showed us what they can do eh? I mean it literally exploded lol. The second season announcement is #4 top post of all time in r/Anime and r/Megumin received 2600+ subscribers.

Can't believe that we went from negativity to awestruck. From being trashed all over, to be one of AOTS. DEEN finds a way.

See, this thread just sums up the reasons why the anime community is more cancerous than Beliebers or Directioners.

That moment when it turns out to be actually good.

I also was greatly mislead by the synopsis. The first episode cleared that immediately though.

Because DEEN find the way

-Maz said:
So much negativity on this thread.
Little did you guys realise it would quickly turn into AOTS alongside Shouwa Genroku.
"Never judge a book by its cover." The comments here are great to see though.

So much negativity on this thread.
Little did you guys realise it would quickly turn into AOTS alongside Shouwa Genroku.

i wanted to watch this, but DEEN
whyyyyyyyyy

fukki deen. the character design is so bad compare to the LN, like heaven and earth. i cry.

hahailham1 said:
i cant think anybody else voicing the mc beside matsuoka......
hahahaha
please don't....

I'm already sensing pandering on the horizon. Video games are mentioned in the first summary so it's looking like another otaku bait.

hahailham1 said:
i cant think anybody else voicing the mc beside matsuoka......
natsuki hanae then ;)

-Anabelle- said:
If it's not harem then I might check it out
"If it's not a harem"

I'm pretty hyped about this. It's one of the best LN I've ever read. I don't know any of the anime studios, but judging from the comments this Studio Deen is cause for worry. I'll at least reach the end of the anime.

ReaperCreeper said:
YumeHunter said:
If it's not harem then I might check it out
You probably won't be checking it out then.

i cant think anybody else voicing the mc beside matsuoka......

Actually read some of it...uhm...if anyone craves the likes of danmachi not knowing it may be read..i think this is a + for them