by dtshyk
Mar 12, 2009 6:10 PM | 34 Comments
According to Korean newspapers, Madhouse Studios admitted that a political slogan regarding the president of South Korea was unexpectedly inserted in the episode 9 of "RideBack". Madhouse refused to disclose the nationality of the animator who put the slogan and its intention. They will remove the slogan in the DVD.

Korean netizens found a jargon "2MBOUT" on the license plate of a car appeared in episode 9. It implied a claim for the resignation of the president of South Korea, Lee Myung-bak. The coloring of RideBack animations are outsourced to South Korean anime studios, so it has been a hot topic of discussions whether this message was put by Korean or Japanese animator.

but me I've had enough with these historical disputes, and I'm from Southeast Asia, just imagine what the Americans and the Japanese did there

its all in the past lets move on...

Knowing that the plot in Rideback is mainly Political, i wasn't surprised when i read this topic, although i never imagined it was on the license plate xD I didn't even notice the car had a license plate...

only an insider or someone who is highly familiar with the whole issue at hand would know what that was about. i bet the average viewer probably didn't notice it either.

I hardly doubt that it was the Japanese who did the plate, I mean, why would someone even bother to intentionally degrade another country's president?
I'm pretty sure it was indeed one of the animators in Korea who just loves to bash 2MB along with other netizens. Such a disgusting trend IMHO.. -_-;;
Or maybe he was just desperate for some 'attention'... he made the plate, and sat back and thought "lets see if anyone can find that out... and how much web attention will it gain AHAHA AHAHA AHAHAHAHA (...)"


Cihan said:
Sorry, but an animator inserting his own personal views into a production is not cool at all, I dont care where they're from or what their message is, its practically sabotaging a production that has a lot of people involved, all working hard to make a product as good as it can be.

Ustnap said:
That being said, you shouldn't express your own personal views, especially political, in a show when that's not the intention of the direction of the show. I find it kind of stupid, myself.

Actually, Ride Back is an anime on politics being the main theme, unless you are a mecha fan. Then, you would probably categorize it as mecha instead. If MADHOUSE insists that 2MB should be removed, then I will be supporting the belief. I don't see why not.

Heh, I was too busy being amused by the I90 sign on the building with all the Coke logos to even notice that the plate was a political stab. Have to admit though, that whole scene was thought out very well.

If it was the Koreans maybe it will teach the Japanese to keep animation work in their country and not outsource everything.

As it is, nobody would really care where I live (USA) so I really can't give a good opinion.

it's funny, if they just left this matter alone or dealt with it quietly, it would've passed under the radar of the majority of people.
But some smart people just had to make a big deal out of it and let everyone know, like it's their problem too.

really, this isn't even newsworthy. Just remove the damn thing from the DvD without letting the whole world know, its not so hard.

Unless the whole point of this thing is to get more people interested in this anime, then it's a big pile of fail. If on the other hand it is subliminal advertising for free, then they did a pretty damn good job.

I've finally decided what to put on my license plate.

Oh wow, if not pointed out, I wouldn't have noticed myself. Kinda interesting that something like that would be able to make it into an episode. Then again, how many people noticed it just watching it regularly.

That being said, you shouldn't express your own personal views, especially political, in a show when that's not the intention of the direction of the show. I find it kind of stupid, myself.

Hildolfr's post in this thread is like the MAL version of the incident the news article is about.

The license plate is similar to Arizona's one, and the emblem is korean manufacturer KIA's. 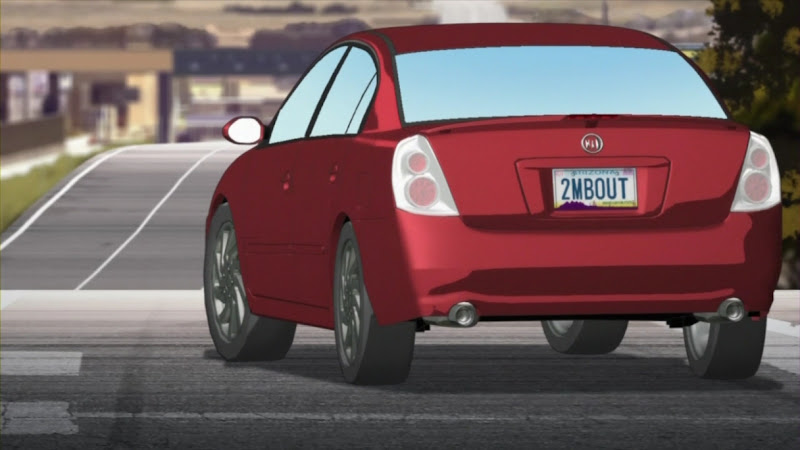 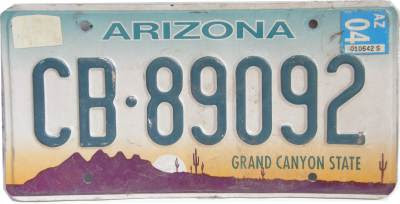 
So when can I expect the Hetalia-esque over-reacting? Or is it okay since they don't approve of him much either?

I hope not. Unlike Hetalia, I actually like Ride Back. It would be awful if it gets cancelled over some "once-again-over-reaction".

Korea has had some bad history with Japan, The Wako pirate raids, The Imjin War of 1592 - 1598, which led to the building of the Mimizuka in Kyoto.

Some of the sources I've read, list the total Koreans killed at around 200K in order to satisfy Hideyoshi's requirement that every soldier acounted himself on the battlefield. Plus tens of thousands of Koreans were sent back to Japan as slaves (although, some who were proficient at pottery were well treated since the tea ceremony starts its popularity during this time frame).

Now for recent history the Japanese ruled Korea Since the early 1900's, and the are no short amount of war crimes that the Japanese commited on the Korean people until the end of WWII. So the fact that there are old Koreans (my grandfather is one of them) who hold the Japanese with suspicion should not be surprising.

Sorry, but an animator inserting his own personal views into a production is not cool at all, I dont care where they're from or what their message is, its practically sabotaging a production that has a lot of people involved, all working hard to make a product as good as it can be.

If some dude did that on a movie production I was directing, I'd kick his head in.

meonlyme775 said:
Aeikai said:
Koreans (older generations) tend to pass the ideology of Japan=bad.
That is so true, it's sickening.

Aeikai said:
However, if it isn't Japanese, it would be funny to see the reactions to Koreans who accuses Japs
Yes, this is also true. I find it funny when people overreact to random trivial stuff. Axis Powers Hetalia was especially good because Korea complained so much when other countries (even Japan) were getting shit.


: / it's not a surprise that the older generation think that. Wasn't there like a huge thing between South Korea and Japan? I know what it is - maybe - but I'm afraid it'd be wrong and then I'd be embarrassed. ><

The license plate is similar to Arizona's one, and the emblem is korean manufacturer KIA's.

should i be grateful for not knowing South Korean's current political climate?