Shaft To Animate All the Monogatari Series of Nisio Ishin 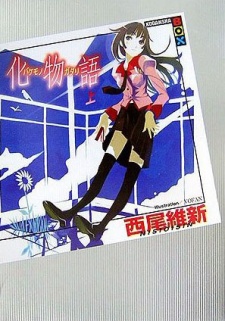 According to Nisio Tsushin, Aniplex has announced that Shaft will animate all the Monogatari novel series of Nisio Isin. The director is Shinbo Akiyuki. Iwakami Atsuhiro, the producer of Aniplex, said the second season of the Monogatari series (see below) will be animated in two cours TV series. Since Nekomonogatari (Black) does not belong to the second season, it will be animated separately. Iwakami also said it's impossible to release the Kizumonogatari movie within this year. The premiere of the movie will be postponed.

At least, with this, I'll know that there will be at least one anime worth watching every year for a long time. :D

that is such good news, at least for me
really, im so happy right now !

and theres SO MUCH MORE to come?
thats just awesome

i really cant get enough of araragi + senjougahara

im wondering how long it'll take for all the novels to get animated+released tho
i really dont wanna spoil myself by reading the novels, but.. if it'll take too long.. maybe i have to : /

all i know is..for series like this, im really a happy end-fan, so i hope.. when it's all over.. araragi+senjougahara will both be alive+together !

im confused as fuuuuuuuuuu, i know that Bakemonogatari and Nisemonogatari have been animated, so does this mean that we should be getting 8 more series'/movies?

This is like Shaft's money maker, I'm not even joking.

Wow, I better finally start getting into this series now.

Looking forward to this :D

Goomoonryong said:
So many adaptations O/
haha yeah but the series is also quite good

OMG this is too good to be true.

So many adaptations \O/

I wonder how Koimono is gonna go. Kaiki ... narrating?

Eksta said:
All of them are boring, why are you guys freaking out so much?

Also, I liked Nisemonogatari. But the first season was kind of ass.

All of them are boring, why are you guys freaking out so much?

The wait is killing me :D

My biochemical homeopathic level of salubriousness is high.