1st Movie of Madoka Magica Due in Autumn

by dtshyk
Mar 15, 2012 10:52 PM | 58 Comments
According to Chunichi Newspaper, the first movie of Mahou Shoujo Madoka★Magica will be premiered in autumn. In the article, director Shinbo Akiyuki said he was worried that anime has been out of mainstream entertainment and hoped Madoka will attract the attention of the general public.

Update Apr 2nd
Aniplex has announced at Anime Contents Expo 2012 that the first two parts of Madoka Magica Trilogy movie will be shown in tandem. The tiles of the two parts are "Hajimari no Monogatari" and "Eien no Monogatari".

Source: Screenshot of the announcement

Bumping this thread because we now have the box office data for the 2 Madoka movies.

BTW I read the reports by those fans who went to the 2nd movie and apparently although the animation was all redone the sequence and scenes look close to the TV series up till midpoint of Ep.9. And after that there are quite a bit of new scenes added, particularly in majo-Sayaka vs Kyouko as well as Homura's talk to QB about Kyouko and Homura vs Walpurgisnacht.


In case some of you have not seen it

Also Madoka (or is it Mami?) is on the cover of the popular news magazine SPA this week
http://nikkan-spa.jp/magazine/309168 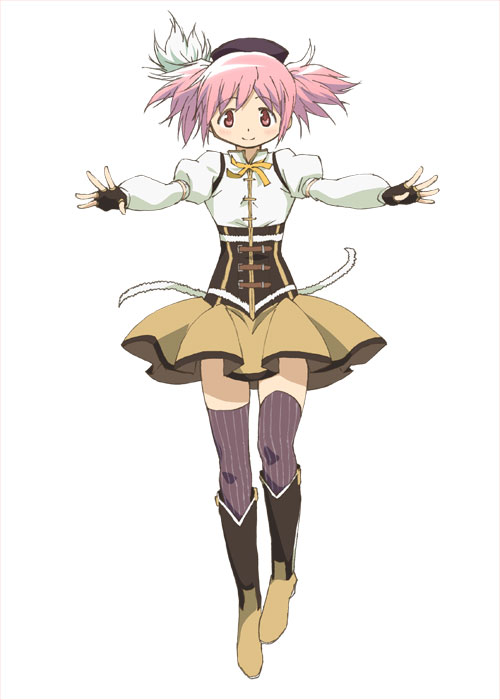 It does have search, jmal. Beside "My Ignored Topics".

That's good stuff though, I'll probably just wait for the movies instead of bothering to watch the series again.

mitch3315 said:
I hope Kyouko is in the first movie, if not I could live with just Homura.

i hope so too. i'm also hoping that in either the first or second movie they will show Kyoko and Mami's history together as best friends. it was in the drama cd Farewell Story, but imagine seeing it for real! i'm just not quite sure which of the two i like more. they're both pretty fantastic characters, and it bother's me that i can't decide who i like more. but anyways, i hope they show their friendship and such. i also hope they finally tell us what happened to Homura's parents

since the movie will probably be featured in Japan only, then whoever somehow gets a hold of it please PLEASE post the movie on Youtube! i beg of you!

The episodic cliffhangers are going to be harder to do in a movie format.
The only really thing they could add is longer fight sequences.
5 minute fight sequence between Walpurgis and Homura = fly to Japan to watch it.

KiraMustDie said:
Apparently both the first and second films are this fall...
Super duper legit.

Just hoping there isn't too much stock footage and plenty of new shitz... The fact that they're coming out at the same time makes me a little scared that there will be too much copypasta.

Apparently both the first and second films are this fall...

I don't care if it's a recap, I already rewatched the series a couple of times and enjoyed it every time, so I have absolutely no problem watching it again in movie form.

mitch3315 said:
I hope Kyouko is in the first movie, if not I could live with just Homura.

At least it's a shorter wait than Diablo 3...

I can imagine the magnitude of clash in Japanese theaters in 2012, lol... Top 3 most successful anime in the history of anime industry coming out all at once. D:

Out of mainstream entertainment? Buddy, you must be crazy

tembikai said:
milk the cow, suck it dry
Yes, please continue to milk Madoka SHAFT.
It is going to be better than 80% of the shit that is airing now anyways.

Good, at least we've got a date now. I just hope it'll do justice to the series and is not just a bunch of anime scenes put together. Re-animating and even adding new scenes would be awesome, though.

milk the cow, suck it dry

Looking forward to this!