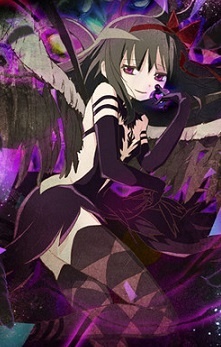 Aldnox Oct 2, 2016 8:07 PM
I know right? So many little details scattered through the series that you only notice during rewatches. Yep, Homura is the real protagonist and the best character I've seen in an anime. It puzzles me how some people say the characters are a weak point. Like, really?

Yeah, I watch it on Netflix, it has that version. I really liked the movies, but they're a 10/10 to me. The anime is 11/10. Beginnings does have some problems with pacing, I'll admit that.

About Rebellion. I freaking love Rebellion. Like, everything about it. A big part of the movie is pure symbolism though, so some people may not fully understand it. And about THAT thing, I had no problems with it. Sure, surprising af, but after a couple of rewatches you realize it actually makes a lot of sense. It made me like Homura even more.

OMG!! THE CONCEPT TRAILER THING IS FUCKING AMAZING!! WOW!! I have so many questions about this. I'm worried that they'll ruin the masterpiece that so far is Madoka Magica, but after seeing this, it's so epic that I think it might work after all :)
Thanks for sharing!!

Aldnox Oct 2, 2016 10:09 AM
We never imagined our favorite anime would be a mahou shoujo. We dislike paper-thin plot, monster of the week, etc. Madoka is the epitome of anime (and all you said after that). Great moments of emotion and character development. Imagery, symbolism, foreshadowing, Kajiura.

It also happens that our favorite anime, anime character, and episode are the same. And you are one of the few people I've seen who noticed the imagery, symbolism, and even the foreshadowing in an anime that is supposedly pure shock value. It's a shame that some people see it like that, because this anime is so much more.

So yeah, that. I never get bored of watching it and analyzing it. As of today, I've watched it 11 times :)

Well, the only show I'm watching is Mushishi Zoku Shou Season 2, which kinda demands that one has seen the previous two Mushishi seasons. But, I believe I may watch Kiseijuu sometime, since it's supposed to be pretty nice.

Soge_king999 Jan 3, 2014 9:16 PM
I see. It's much the same for me, though I'm still on vacation for 2 more days, and have been for the past 2 weeks.
Well, I never really watch much seasonal recent anime, especially as they're airing or shortly after. I still have a massive backlog of super important older manga and anime to get through anyway. But, I will almost certainly be checking out the Mushishi special when it becomes available, and possibly the new Sora no Otoshimono movie.