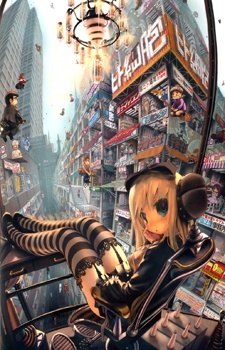 tehz May 24, 2013 8:50 PM
haha I forgot about those. If I remember correctly, some of those were "remastered" scenes on the laserdisc release or something. I don't know who did the art for those scenes, but I'll bet I have two more hands than him.

redman_packerfan May 24, 2013 11:01 AM
And ya, whoever this Hawkeye guy is, I agree with him. Go ahead and skip everything and watch LotGH. Though it may be a bit rough by yourself, it was quite nice to have a partner for the grind

tehz May 21, 2013 7:59 PM
haha i thought you knew him from home or something. Maybe he's just a really big fan of the hayate game. Also, it's nice to see that you hated SAO as much as I (and probably morgan) did. Not even tentacle rape could save it.

Eureka Seven is really good (I think lol), and it's definitely easier to watch than LoGH. I know you haven't been feeling anime recently—a good thing—so trying to slog through the first 20 episodes of LoGH probably won't go too well. I think the animation quality improves over time, but the style stays the same. So you still have that late-80's/early-90's character designs, etc.

I got BW2 a couple months ago, and I really think that there are two teams making pokemon games. Like Team 1 makes the first game set of a generation, and like Team 1 knows what they're doing and try to add to pokemon, but they have no care for modern game design trends. Team 2 tries to evolve pokemon and is aware of modern stuff. So, my evidence:
HGSS is made by Team 2. It has nice things like auto-run, and pokemon follow you, and there's the remixed GB soundtrack. Then, BW comes around and just throws all of these things out of the window. Then, BW2 starts adding some of these little things back in.

John-Wayne May 16, 2013 6:07 PM
Watch Ginga Eiyuu Densetsu. Most anime is shit compared. It has ruined this season for me. It's so good and everything else is so bad.