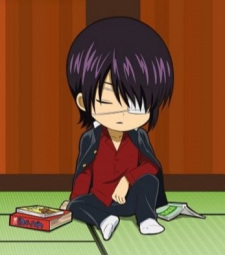 Alexisonfire98 8 hours ago
I checked out and is also present here as Glitter Force, strange because here aired some series of the Precure series.

Alexisonfire98 11 hours ago
The manga format is more enjoyable tho, it really makes you understand all the specific things about biology and science.

Is the Precure available on Netflix?

Alexisonfire98 11 hours ago
Yes! Is very educational, I rarely saw an educational Manga so much worthy.

Alexisonfire98 12 hours ago
Yes, usually the biggest the fandom is, the worst will be. That's why I prefer small titles.

Also, thanks to Black Friday, I bought the Physical version of Cell at Work manga. Is wholesome!

Alexisonfire98 12 hours ago
Well, not so good to enter into the Top 30 manga of MAL.
Is a solid 8,is funny and possibly is the Shonen version of Dorohedoro with his "dirty" and violent vibe. But don't deserve the high praises, and the fan base is so toxic that is hilarious.

Alexisonfire98 Today, 7:12 AM
My main complain is how too much fast-paced and how the characters lacks depth. Some are introduced just for dying in the next chapter. Some have just a few lines of characterization (I hope that I don't sound homophobic, but for example all I can remember about the Lesbian hybrid girl, is that she's lesbian).

Alexisonfire98 Today, 4:31 AM
I didn't know that lol, mad respect for CLAMP!

Yeah, it can happen that sometimes a story that everyone loves can't click for you. And don't ignore the fact that people tends to overhype a lot of stuff. I talked with people who literally stated that Chainsaw Man is the best manga that Shonen Jump ever did. I was like "Yeah is good but... Can't you see that have a lot of flaws?".

Yeah, I know that people are loving it, but I really bored by it. The manga is basically the same thing. I think that overall isn't the thing for me.

You also asked me about Blue Period Anime, honestly I find it boring. The pacing is sluggish and the animations are stiff as hell. It not a mb anime about Art, but how people (really bitchy and boring people) feel art. Read or watch Arte instead, is much better, the characters and the story are league above.

Alexisonfire98 Yesterday, 9:36 AM
I admit that I'm curios about the manga. I'm gonna start it in the next few days I think, right after Me & Roboco and Magu chan.

Alexisonfire98 Yesterday, 5:37 AM
Don't say that I haven't warned you..

Alexisonfire98 Yesterday, 3:38 AM
No bro nooooo, the ending is just a middle finger to your intelligence. It genuinely angered me.

Alexisonfire98 Nov 25, 12:05 PM
Bruh Obata freaking regressed. From the second half of Death Note, to Bakuman to that disappointment that is Platinum End. The storyline becomes so much worse and lazy. Man's fantasy peaked and then died.

Alexisonfire98 Nov 25, 11:05 AM
I remembered that also you asked me if Platinum End was worth or not. Let me tell, after a bunch of episodes become so much worse, I even started and finished the manga is freaking garbage. Obata really don't know how end a story.

Alexisonfire98 Nov 25, 9:45 AM
Eh, I really don't like the uncomfortable feeling. I see people praising MiA but I guess is a situation like Dragon Maid, where I simply can't stood the all thing.
All Comments