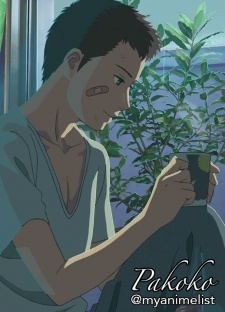 SlightWeeb Sep 13, 2019 3:13 AM
Well this sucks. Account seemed to be a genuine exercise in edification and goodwill. Kind of people the internet needs more of.

kureakuma Oct 10, 2016 11:01 PM
I stumbled on your review for Gin no Saji and was really drawn by your profile description! Can't wait to see what you have to review next : )

DeXeTer Aug 7, 2015 4:46 PM
not much really l have been watching some seasonal stuff but like you said its been pretty mediocre and am watching a lot more retro show's then l used to

DeXeTer Aug 7, 2015 12:19 AM
yea the time fly's by quickly during it lol and yea the whole series is rather average and the nagato series was pretty awful apparently

DeXeTer Aug 6, 2015 11:40 PM
Hey how did you like the haruhi movie? personally l think its better then the series itself.

Oh btw, I know who you're but I'm might be wrong, but I don't think I'm wrong.

GeeksOasis Jul 28, 2015 12:41 AM
Your profile description is amazing. I loved the way you tied in a brief but interesting story about your upbringings into the medium with the current season. Very creative, and a cool profile altogether :D

yumeparadox Jun 17, 2015 5:41 PM
Hi again, I haven't been on the site as of late but use the mobile app to keep my list updated. It's no problem! I find it really inspirational to see others write about something I like and you have a great perspective.

I'm looking at completing some older anime from early 2000-2011 that I've put on hold such as Dragon Crisis and The Familiar of Zero off the top of my head. I don't seem to ever get around to it though.

And if you ever find a talking stuffed animal, your time will come too haha.

I'm actually worried for the next season as I feel like this season's s2's were a lot better. Then again, non non biyori and working are quite nice so I might take that back. I'll definitely miss kinmoza though.

F/sn has been nice in the sense that it keeps me interested as to how they'll present the story in light of what happened in f/z. Ufotable added quite a bit of stuff compared to the DEEN adaptation and even the green tentacle monster from last week's episode and such keeps me engaged. For example, my favorite part about the episode was probably the conversation after the dolphins with them going on and on about whether it was "successful" which in Japanese the sound of the characters can also mean "sexual intercourse". DEEN adaptation also had Shirou asking the same question but little things like them having Rin go on and on about it made what would otherwise have been a dull episode quite a bit more interesting.

Euphonium's been a love-hate relationship of sorts. Visually it's great (sasuga kyoani). The band drama kind of makes me want to blow my brains out. Some characters are really great while others are absolutely worthless. Interactions between Reina and Kumiko is probably the main reason I'm still watching. I agree Kumiko's a nice character for the same reasons you said, but she alone isn't interesting enough to carry the show with how many dead weights there are, I feel. Natsuki-senpai's ponytail's great too. I actually love that hairstyle so much jesus.

I haven't watched the most recent episode of Plamemo. The romance I would have bought if I had a bit more episodes to see the relationship between the two of them develop. As it is though, it's hard for me to see anything aside from the initial infatuation that the MC started out with. I've always like the premise enough that I would have enjoyed a 2 cour but I guess it's whatever. It could have been worse. I'm somewhat salty but not as much as kumiko losing her ponytail in euphonium.

I kind of agree with ore monogatari. I feel like the content's getting almost repetitive since the first few eps were a lot more progressive in a lot of ways but I'm just afraid it'd ruin what's not exactly broken in its attempt to fix it if it took the drama route.

I somewhat feel the same way with Soma but each ep is enjoyable enough that I don't want some insane plot twist to hit me just yet. They're both 2 cours so I guess I'll find out later.

I still have no clue what the fuck's happening with Kekkai sensen and I'd guess i wouldn't even be watching if it wasn't for the god-tier OP/ED. It's not that it's awful or anything. I just think there was a lot of potential that they missed out on for the sake of keeping things episodic and maintaining the vibe it started out with. There's the overarching plot with the sibling but I think there could have been a lot more to the show.

Arslan Senki feels like it's just dragging on. I don't know personally where the story's going so I guess I'm partially eager to see what will happen but I don't hold insane expectations for it at this point.

Man, stuff's happening in Houkago no Pleiades and I feel like I haven't paid any attention in the previous episodes. This whole show and how bored I was watching it earlier on is a testament to how I'm willing to watch anything with cute 2d grills.

I feel kind of ambivalent about the summer. Are you still going to school? Wait no, you probably mean the anime season.

Jaytsun Jun 2, 2015 1:44 AM
Long time no comment m8. Felt like giving an update on my thoughts on the season since the last thing I said was that I wanted to see how euphonium develops or something to that effect.

First off, I have thoroughly enjoyed continuations of shows like Nisekoi, Kinmoza, Sidonia no Kishi and Danna ga etc etc. In fact, I'd say all of those shows have grown me much more than when I watched them in the past. I've also found the newer characters in those shows quite easy to like as well, even if their introduction felt rather abrupt. They don't really have too much substance but are always enjoyable and consistency is quite important.

F/sn has also been better than what I expected it to be based on my experience with the VN where I always felt the content of an individual arc was very weak on their own. It's not perfect by any means and honestly the themes and dialogue feels very long-winded, but at the very least it's probably the best looking show.

Euphonium I was meaning to drop but somehow ended up grudgingly watching on until I reached ep 8 where I felt like the interaction between the characters seemed as though they shaped up to something. In other words, it felt like I was watching something aside from band drama which was honestly quite awful for me personally.

I'm not sure what I expected out of Plamemo in terms of the content but as for the quality, it's about as good as my expectations for it. It feels overbearing on the moe/comedy aspect sometimes and the drama can feel very sudden at times and definitely nothing particular mindblowing, but it also handles the themes well enough that I don't particularly dislike it.

Shokugeki no Soma has been very enjoyable. I'd like to think it's good enough if a show does what it's striving to do well, regardless of whether or not I take it seriously.
In that sense it might be my favorite show this season. Maybe Ore Monogatari would take that spot though just because of how much I like everything about the show even if it's very diabetes-inducing.

I've found Arslan Senki, DanMachi, Yamada-kun7, and kekkai sensen to be a lot more enjoyable than what I gave them credit for on the first viewing. I don't think too much of them but they have their own quirks that I think are actually rather nice.

I'm still kind of watching Mikagura Gakuen Kumikyoku, Owari no Seraph, Houkago no Pleiades, Disappearance of Nagato and Triage X but I honestly don't know why. I probably shouldn't. I dropped everything else airing this season I think.

All in all, it's actually one of my favorite seasons surprisingly enough. Maybe it has something to do with me not enjoying other things in life as much lately, but I can say without a doubt that I have enjoyed quite a number of these shows.
All Comments