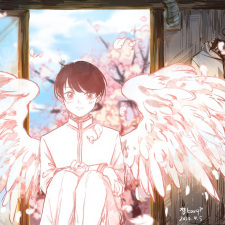 MisaoAino Feb 14, 2019 9:46 PM
Nice to meet you, ladypeach! I'd like to invite you to the Immemoriam Library club: https://myanimelist.net/clubs.php?cid=74520&time=1550208728
At the club we are currently focusing on our favourite male characters in anime. That is why you'll find threads about it and Best Boys Competitions. Soon, we will be starting with the 8th one! :3
As for other features, you'll also find games, recommendations, and a Discord channel ^.^
Hope this sounds interesting for you! I'm sending you an invite so it is easier for you to join :3

Remix Feb 7, 2018 3:31 PM
Happy to see we both got pitched Ikuhara by two close friends as well haha. I still loved it, despite it being roughly my 600th anime or so. It's just really easy to consume, its vibrant and not too hard to wrap your brain around. The cast, and especially the penguins, gave it enough humor to make it fun as well. I can see it holding up very well with a future viewing. I still need to checkout Yuri Kuma Arashi, which seems to be the least beloved Ikuhara work. (Didn't even notice the Ping Pong love <3 that's awesome. One of my favorites for sure)

Looks like you're closing in on Utena and Five leaves. Look forward to see how they both end up.

I still haven't touched Thomas since the last message, but I was finishing up Mars, which is now one of my favorite shoujo manga by far. With that finished, I can get back to my gay bois with Thomas. Zankoku I recognize the cover from a few favorites list! I was not aware that was the same author haha. I will definitely need to check it out now.

Regarding your first reply, you can add me if you'd like on discord. I'm much easier to reach through there (apologies for my late reponse btw) 77remix#3067 would definitely love to catch up sometime~

I recently converted to Ikuhara-ism last year watching Penguindrum with Serendipity (since it's usually deemed to be more beginner friendly) and then I watched Utena with ShaKing so I had a lot of fun simulwatching with people while also picking apart the show and the symbolism/motifs that he loves to shove in there. Utena to me never felt too self indulgent with the directing style, and despite it constantly being labeled as repetitive, it felt oddly fresh in its presentation and battles. I fell in love with both shows almost instantly and I plan to rewatch both sometime this year cuz I just feel like there's so much more to dissect. You hit the nail on the head and Utena is definitely one of the best female leads ever, she is kind of like Oscar 2.0 (You should checkout Rose of Versailles in the future!!)

Five Leaves was an interesting one for me, but it ultimately sold me with the atmosphere and the cast of characters and their interactions to make up for any semblance of a plot. As someone else said pretty well, Natsume Ono is like the anti-climatic storyteller, you like it or you don't haha. It's because of this I want to rewatch ACCA because that was my first exposure to her works and I remember it being very chill but oozed a lot of style despite the plot being iffy. I might appreciate it more a second time around, but five leaves just clicked for me. Yachi is hot af

I've only read the first 2 chapters, but I like it so far! Funny that I just mentioned Oscar above, because there's another Oscar in here that I'm already in love with! (Rina's current MAL pic) It's gay and screams shoujo from the plot to the designs... I have no complaints

Hope you're enjoying Five Leaves and Utena, they're two of my favorites!