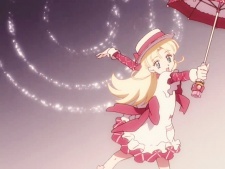 Shoujo would be more like Sailor Moon (that's a great anime) or Tokyo Mew Mew.

ArielMermaid Apr 3, 2014 11:10 AM
Hey! :) I see that you don't visit MAL that often, but I'll still write you a comment, hoping you'll see it. :) Thank you for your Ashita no Nadja review, I just started watching it and it's really kawaii :3 You seem to really like it, I see your avatar is also a pic of Nadja. Greetings ~ :)

SnazzGary Oct 22, 2013 3:23 PM
Wow, you've dropped a lot of good anime and manga. Uraboku, Yami no Matsuei, Samurai Champloo, Code Geass, and Loveless. Vassalord is a good manga too. Though I can guarantee you are going to like Karneval.

Camarel Aug 29, 2013 3:43 AM
Hey do you drop anime because the anime is bad? Or because the anime just bores you? I don't know much of the anime you've dropped but I can see some of them are around the year 2000. The anime I've watched are mostly around 2006-present so I was wondering if there are any older anime worth watching.

Also, if I may give a recommendation.
I can see that you really don't like Air or Clannad that much.
I think that all the KEY series are great, but I don't mind emotional stories, cutesy characters, or simple premises.
I'm not starting an argument here, but I do think that the ending of Air gives it more than a 2, and Clannad improves a LOT later on in the season. ESPECIALLY, its sequel After Story. Try not to spoil it if you can. It's worth watching and by far the most realistic series they've done.
Kanon and Little Busters are also options, but they're kind of a middle ground between Air and Clannad, so you may not change your opinion. I will say that Kanon gets darker and Little Busters is going in a very serious direction for the second season.
Here's a quick look at the preview for that second season.
http://www.youtube.com/watch?v=1euB5F28fK0

If you want something with a bit more action and a great soundtrack, watch Angel Beats.

And if you want something similar, but different, then try Anohana (The Flower We Saw That Day) the series and the movie that just aired this summer. I still need to watch it, but I highly recommend it.

Also if you at least like the animation of Air, Kanon, and Clannad, then I recommend looking up the other Kyoto Animation series if you haven't already. Some great stuff in their lineup. For example, Chuunibyou. Funny, smart, emotional, and psychologically interesting. It may have at least one moe character, but if you can survive that, it's worth watching.
http://myanimelist.net/anime/14741/Chuunibyou_demo_Koi_ga_Shitai!
And if you like the style of Little Busters or Anohano, look up J.C.staff's work. I highly recommend Sakurasou no Pet na Kanojo.
http://myanimelist.net/anime/13759/Sakurasou_no_Pet_na_Kanojo

Well, that's my recommendation. Take it or leave it. And if you don't like the series, you should still appreciate the soundtrack. Great songs by Lia or LiSA.

Shining_Falcon May 28, 2013 9:01 AM
Hi there. Sorry if I'm sounding like your last comment, but where is your main profile picture from?