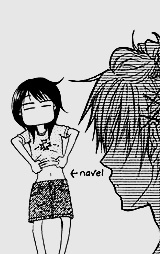 4 years... feels soooo much longer! It's been fine. Glad to hear you're doing awesome. I'm still in IT, different department now. Still watching all the animes that come out. Loving Vinland atm. TG ---> Tokyo Ghoul, geez. I'm so stupid.

Took the day off today. Uncle passed. Getting ready for the service.

I'll add on more when I'm not busy.

AlbertoRaccoon May 31, 2016 12:26 PM
Hello ^^ I just wanted to point out that we share the same favourite manga (Koukou Debut, Orange and Dengeki Daisy) hehe >I've just finished watching TG the second season and also read the manga up to TG:Re
sry, what is this?

>I'm going to start interning at a hospital soon
so cool, bring my some tramadol. =P

things i've done:
gave up on doctor who
moved (now i got me those 6megs!!)
working @ department of technology!!! fk yeah!!
getting drunk right now. =)

inzaratha Jun 6, 2015 3:20 PM
That's great that you are interning! Wow.
I'm late and busy too as I've been working a lot of overtime so similar real life work and things taking up my watching and reading time unfortunately.
I have so many that I wait for chapters on or else a bunch come out and I don't have time to keep up on them all like these last month or so.

I like the short ones that I can complete and be satisfied that I've finished something sometimes too. They are a good way to go when waiting on the chapters forever on other manga too.

Grafiene May 21, 2015 1:11 AM
Hi! You wrote at Nakamura Asumiko's page that u cant find A-senpai. It is under pink gold collection.

inzaratha May 11, 2015 2:20 PM
Thanks for the links, I bookmarked them and I’m going to start reading the summaries. I was doing that on another site with summaries and forums a while back (like a year ago or so ) when there was a big gap on oddsquad when they hadn’t been doing translations for a while. I was doing the same thing, looking at the webtoon in Korean and reading the summary in another window in English lol

I will read them. Did you add it to your manga list on mal yet, because I didn’t see it on there last week.

I think the writer said it would be finished soon but then she kept it going because it became more popular. Anyway the way it is now, at vol 3 ch 44 (166) I can’t see it being over soon, there is too much up in the air and I can see it continuing because there is too much still hanging and not solved. I hope anyway since it’s one of my favorites. I will start reading through the summaries, but right now I’m at 166 (v 3 ch 4 ).

See I thought that Jung has had a lot of development and so has In Ho. Also Jung has always been used by people because he was both rich and smart, they wanted to just use him for those reasons and weren’t really caring about him as a person, so of course he felt that and became detached. I don’t think his dad ever really got that, and in fact, trying to get people to be friends with his son, just made them also users. Like who wants fake users around them? I don’t think his dad and the doctor understood the way that kids were using him and made it like Jung wasn’t caring, and had a personality problem, when in fact, those people were not true friends to him. I don’t mean In Ho, but like everyone else until he met Sul. She is the first person he has met that isn’t a user. She wants to do things herself, not use him to make it easier, in fact she makes a point of not using him even if it would be easier for her. Jung and Sul are actually very similarly personality wise deep down. They are both capable people. In Ho has had a lot of character development as well. I think if he can start playing piano again it will help him.

Yep I saw all of those K dramas, lately I’ve been watching more anime than usual, as I’m more of a reader. Yes several webtoons and manga have been and are being made into K dramas. Heartstrings is one of my favorites and Pinnochio and City Hunter. It will be good if they make CIIT into one, I would watch it definitely.

I have only learned some Japanese and Korean from listening to it, but still not very much. I do have a language program for Korean and probably will get one for Japanese, but I cannot read their alphabets at all. I can’t understand much, just some words here and there. I like the sound of Japanese and know words here and there more from reading manga than from watching. I do watch anime and I read both manga, manhwa and webtoons (which are mostly all manhwa) I understand much more French and I can read that, but I can’t speak it well at all.

For webtoons, Diamond Dust, The Friendly Winter, MeloHolic, Pink Lady, Noblesse, UnTOUCHable and Winter Woods are good ones although there are a lot of other good ones as well. Like CIIT XD but it’s one of the best ones. If you go to webtoon live – naver’s English version there are a lot there.

inzaratha May 7, 2015 1:50 PM
Hi there! Cheese in the Trap is on mal now so you can add it to your manga list! Are you up to what is out on oddsquad ch 166? If you are that would be great as I would have someone to talk about it with :) I only have one online friend oh here who is up on it and she hasn’t been on here in a long time ( friend on mal) So it’s great to meet another cheese fan.

You should add it on your list and click through and rate it well so it well help with it’s ranking!

I love it! There’s just something about it that is real but mysterious, like I still don’t know if Jung did stuff or not. I sort of think that In Ha (In Ho’s sister) is behind the whole thing instead. Like I think she had that guy that he called piano bash her brother’s hands up on purpose because she was jealous of this talent, and I think she sent all those messages from Jung’s phone to Young on purpose too just to play with him. And she seems like a true sociopath, way more than Jung does. So in trying to help his son the father may have enabled a true psycho.

I think Jung has the possibility of being a narcissist but he doesn’t really seem that way with Sul because it firstly she isn’t trying to use him for his money and use him for helping her – and that is rare for him because everyone treated him that way and she is the first one who wants to be treated like an equal and not a user. So I think she may be the first girl he really loves because of that. Also she is smarter and is equal to him in brains and I think he likes that too.

And with In Ho, I really like the chemistry between him and Sul, like they joke around and have fun.

I haven’t read beyond 166 I did read beyond in summaries for a while but I can’t find the group that had them anymore.

I am sort of torn between whether I like her with Jung or In Ho better too. In a way I think she is good with both of them, ya know.

I do like the Korean manhwas and manga both and I also watch K dramas - all in English translations or subs of course though. I have been trying to learn to understand the speaking Korean to try to understand what they are saying on K dramas but I can’t speak it myself much at all and I can’t read the different characters/ alphabet at all yet.

I’m glad you are a DAISY and a CHEESE fan, two of my absolute favs! :) XD

Btw – I work full time so if I don’t reply right away that is why.

nope, didn't get mah fking 6mbps! lol moving is the only option from what i've heard... and that's not gonna happen right now. might eventually do this, but during the summer of this year... hopefully.

>my mom got me the 2nd and 3rd books of ice and fire/got
coooool, christmas present? well, i got a pair of shoes from my brother (awesome). he got a grinder from me, cuz of his welding job. also working on a htpc for my mother as a late christmas/bday gift. im just waiting for the "Lian Li PC-O5" case to come out. nice little mini itx pc case that features a glass side panel. she's using my old toshiba laptop via external monitor atm for her "hulu" shows.

>do you watch Legend of Korra???
haven't seen it.

Parasyte -the maxim- yup, currently just collecting these eps, haven't watched it yet. from what i've heard, its gonna be awesome.

>How's your wrist now?
all good.

>Oh, and I have until January 4 because classes start again on 5 and I won't be able to watch as much until summer. :|
got tuesday and friday off, so i'm trying to finish up some of my anime shows also. really don't have time during the week now (new job, which i just started 3 weeks ago). at my last job i would watch anime at work, cuz it was slow and boring. lol other than that... nothing worth mentioning.

>I think I'm missing this season.
Log Horizon 2nd season!!! lol only show i keep up with regularly... besides naruto. =D

>But have you seen the winter season list??? It's freaking awesome.
haven't seen the list! usually just see what nyaatorrent spits out, that's how i keep up with new releases. xD