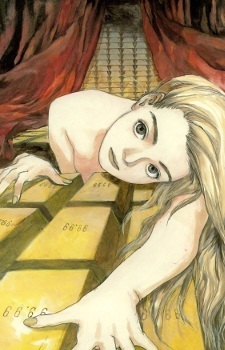 angelehearts May 13, 2:06 PM
Hi there! Sorry for replying so late, life has been really stressful lately but I really love your taste <3

gothmeds Jan 12, 10:15 PM
hey! sorry for the late reply, i just havent been in the mood lately. If i remember correctly i think it was from a forume your profile catched my eye and when i checked your ;rofile i really liked your taste sooo yeah :)

my family has settled down and now we've bought a house already! though I still live in my student apartment on my own

how have you been lately? I see that you made a return when i was gone...
when I closed my comments you were inactive for a while

MAYOIII Mar 25, 2019 8:01 AM
aww really?! thanks lolol
well, my english did improved drastically since i registered a few accounts on different forums (english ones ofc)
and im a passionate literature/movie lover so thats also a reason

ahh
im sorry about that well, ive heard relatively negative things about the immigration office (how sloppy they can be, and the constant procrastination)
well good luck!!
and ofc i know how different russia is from america lol

haven't been to russia before but i always wanted to! and have some good vodkas together with my comrades (hopefully you aren't offeded lol well im aware this is a stereotype but asians love it; and thats one of the reasons why russia is loved by young people, the whole loyal, tenacious and masculine vibe it gives off)

i see, both of ur parents are russians too then? i assume
and same, i prefer my own country's cuisine over others since im used to it
* are your parents really strict on your 'cultural behaviors'? i mean do they strongly wish that you could 'assimilate' and get adapted to american culture? i know tons of asian american parents are like that

really? not much of a cultural shock to me tbh, but there are a few misconceptions i think (and i've been attending an international highschool back then, so it kinda helps too)
i've came to u.s before, twice, but only as a tourist

really?! that's unexpected cuz in asia russians are known to be amiable and helpful, as they address each other as comrades(which is not true i think lol but that's what they're portrayed in fictions, like games and movies)

well, have you ever returned to russia ever since you got here?
and what's your impression on u.s when you arrived here? if you're interested in sharing

well, probably people lol
family, friends, or complete strangers
talking to them just fills me with a sense of belonging that cannot be obtained otherwise
and then there are food and my house i think

how about you then? miss russia much? c:

* and sadly, im going to enter a hiatus on mal tonight
and we just get to know each other for a bit lol ur an interesting and talkative person i can tell
unlucky i guess, but you can reply to me nonetheless, and ill reply back after i returned !

MAYOIII Mar 24, 2019 7:30 PM
that website is dedicated for people who are into obscure indie music so yes, there are recommendations there
that's how i found the song that you included on your profile!
and the channel (david dean burkhart) is one of the few channels that i've subbed to so you got me curious there

oh ok, i see! since you do have her included in your favorite people so i'm kinda expected you to know otoyomegatari
take your time then! its a fine piece of work and its one of my favorite manga of all time!

i've been here since 2015 and i'm here because of college (im an international student)
i enjoy living here by all means! no matter the culture, the people, the weather, the environment, the pricing... etc everything is up to my taste and standards basically, and some even exceeded my expectations
the only thing that i'm not fond of is the food tbh (no offense :x) im not used to american food, or fast food in particular... but i do like the diversity of the food you get here at different restaurants/markets/stores etc
i like the social atmosphere here! and the expressiveness of the entire society
woa really? are you still in u.s right now? well, where are you from? if you don't mind telling
are you a student too?

MAYOIII Mar 20, 2019 5:37 PM
hey there!
do you use indieshuffle.com by any chance?
the channel that releases the song on your profile is one of my favorites
* and its nice to see another mal user who appreciates kaoru mori's works!
do you plan to read otoyomegatari any time soon?

Oterino Mar 5, 2019 11:13 PM
It's really not out of place, it's one of the best isekai mangas I've ever read and honestly I've read a shit ton of isekais.
I don't think you should shy away from it, there are bad and good isekais, the stereotypes that people make on the isekai genre are just overly generalized but if you make the effort of actually reading some of them like Slime datta ken or even watch animes like KonoSuba, you won't be disappointed.
As for what the manga Koushakou Reiju is, honestly it's a masterpiece, the way this manga manages to abord so much reflexion on management, economics, land property and politics is absolutely baffling. It may fool one's eye with the fact that it starts out as a female worker being transported to a world from an otome game trope, but really that aspect of "reincarnation" is quickly done with. The female MC, Iris Lana Armelia, ends up becoming a revolutionary figure in the world she's in, by deciding to forge her own path towards success and affirm herself as an independant & smart woman. If you're looking for a strong female MC, you need to read this.

Yeah, it was the first time someone (other than my parents) praised me for something i did and i felt like i was going to cry lol thanks!

Ohhh so you know spanish? that's great! At least you can read and understand it, even if it's a little, that's better than nothing. I'm supposed to be able to talk chinese after five years studying it, but... nope, i can read it and like you, understand it but can't even have a basic conversation. that's why i'm trying to be better at japanese and at least i don't feel so bad because i can talk with someone (a bit, for now) even if my grammar is shit...

I agree, i mean i don't really think my life is boring but if i compare it to another's then well i can say it's boring lol i don't really know what to say when someone asks about my life because it's... awkward... like, "heyyy i don't really do anything besides working out in the morning, sutyding in the afternoon and playing videogames/watching something at night or idk waste an entire day because of my anxiety!!!!!!" you know? but yeah boring isn't bad but it's that, boring haha

The museum was "Reina Sofía", i tried to find the exposition i was talking about so you could see but i didn't find anything :( omg what..... what museum was it? or what was the theme?? me when i read the "real human pubes glued"

I'm sorry to hear that... it's not easy but take your time to get used to it. these topics are a bit delicate and i suck at trying to make people feel a bit better so i'm not going to say anything more just in case but even if we barely know each other i'm here if you ever need something!!

Oh that's up to you! I use twitter to do the same thing (and to complain about everything in my life) haha i asked because i think we could talk more there even if we both suck but if you don't feel like it don't worry c: (i mean most of the time i talk in spanish there i guess i'd be pretty annoying?????)

I know what you mean, when i first saw it i didn't want to go near it but it's being published here in spain and i was like... why not and it's pretty interesting how carnivores and herbivores live together and how carnivores struggle to not eat others! but some relationships are a bit... weird

bomi Oct 15, 2018 12:07 PM
Yeah it's comforting in a way but it still sucks ;; yay thanks!! i wasted a year because i should have finished it in 2017 but well it was worth it since my professor praised my thesis a lot even when i was thinking it was shit so i was just like wow i did that lol because i'm not good with school either so i pretty much feel you, but it's better going at our own pace while we still can!

I hope so... tbh i'm just making excuses at the moment like waiting for the date of the master's degree definitive list so i can feel bad and then start job hunting even if it's being a shop assistant at first. i'm checking some pages from time to time in case there's a chance i can apply for a scholarship and go to another country to study. i even started to study on my own two months ago so i can take the jlpt (japanese language proficiency test) because i should have taken it while i was in college but like i said before i'm not good with school or studying so even if i love learning languages i'm too lazy to study on my own and i forgot a lot of grammar and vocabulary :/ i feel pretty useless because i see people that have been studying the language less time than me being better at it and being able to speak it almost fluently and i'm just like... well. but i hope you figure things out too!! at least we're still young because i would feel a lot worse if i was like this and i don't know, 40 years old or something i guess

Nothing sadly, my life is still as boring as always hahah but if it counts two months ago i was in another city visiting a friend for one week and we visited a lot of museums! there was this one where there were a few expositions and one of them was really weird. it was a... basement?????? but there was nothing there??? it was dark and we couldn't see anything so i used my phone's lantern and before i could light up the room we heard a yell like... a monster yell lol it was surrealist but we ran away like our life was in danger and the security guard that was there was watching us like we were crazy and i've been laughing forever a this, i guess that's the most... exciting thing that happened to me in a long time. Aaand i just told you my boring life yay!! :-( what about you? pretty sure your life is more exciting from what i remember you telling me (⌬̀⌄⌬́)

btw do you use any social network besides mal? like twitter or something since i'm almost always there because i have no life!! and we could talk more... i feel so awkward asking this i don't know why uh ( ͒ ́ඉ .̫ ඉ ̀ ͒)

oh and before i forget, i recently started reading the manga "beastars" and the story is nothing from the other world but i love it and i think you'd like it too! i find the author's style really pretty and original (i'm sure there's a lot of works where the characters are animals and they behave like humans but i haven't seen or read anything like that so... :B)
All Comments