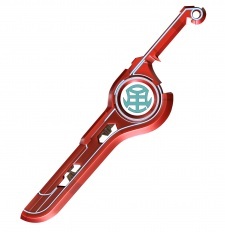 Inferno792 6 hours ago
I wouldn't even say it's that bad, but it's certainly got a lot of dumb events, and weird decisions by characters that completely contradict their personality. Also, the female MC is one of the worst I've had the misfortune of watching

AdolZeppeli May 10, 2019 7:43 PM
Yoo, Yeah I actually tried some older FF games, but never finished them. One day I'll get into them.
I once started Wind Waker, but never played it through the end, so one day I'll play it, same goes for BotW.

Xeno series is something I look up to. Are the Xenosaga/gear/blade connected or they just happen to have a similar name?

I have so much to play but fuck, I'll probably die before finishing all I have pending xD

HellLyter Apr 1, 2019 9:50 PM
Oh yeah, forgot to mention that I just watched the first episode of Pkmn Sun and Moon, which you seem to like based on your score for it. What exactly do you like about the show?

HellLyter Apr 1, 2019 9:48 PM
Hey, thanks for checking out my review! Yeah, it was unfortunately pretty crappy imo. The only reason why I was able to watch it all was because I sort of binged it all before the last episode came out. If I was following it weekly, I would have given up on it months ago XD And hey, at least Mars of Destruction was funny bad. DnK was just...bad.

I actually have a review out on KissXSis that I wrote a few years back It probably sounds pretty bad since my writing was worse then lol explaining why I like the show. And I agree, I enjoyed OreImo too. Eromanga was the only one out of the three that I thought was meh, but hey, I needed another Sis X Bro to compare DnK to, and it was still better anyway. Sure man, I'll check out your review! I'll give my thoughts later :)

Nah, I'm more of a FEH player Fire Emblem is my jam bro But yeah, I absolutely adore the Fate series. How about you?

Yep, I played it! Despite what critics say, I absolutely loved the game. Sure, there were a few little issues here and there, but it was super fun to play and a great conclusion to the Xehanort saga.

That's alright man. And I'm sorry for never getting back to your last comment :( Once I start to get busy, I just sort of...never get back to some things.

HellLyter Dec 23, 2018 8:38 PM
I appreciate that you took the time to reach out to me and am glad that you liked my profile! which I put way too much time into making XD I was honestly surprised by how much I ended up liking Zombieland Saga. Pretty awesome show imo. Correct me if I'm wrong, but by "little hints," are you referring to the hints about what happens in the anime that I included in my review? Because if so, I'm glad that you noticed. I wasn't sure if people would be able to pick up on them. Though if you were talking about something else, I'm sorry for misunderstanding. And I'm glad you liked my review, though it's probably bored a lot of readers due to its length XD

Thanks for the recommendations! I thought about watching Happy Sugar Life back when it aired but just never got around to it. I have a lot of free time now though thanks to winter break, so maybe I'll get around to watching it sometime soon. And man, it has been a long time since I've done anything pokemon related. I might as well try to get back into it if XYZ really is that good. And you can never have enough of cute girls doing cute things, so K-On 2 would probably be the most likely one I'd watch out of the three. I was surprised by how much I liked the characters back when I watched the first season. They're just so lovable!

Wait, who was Xion again? In all seriousness though, she really is a great character. Funnily enough, I literally just purchased the 358/2 days novel like an hour before reading your comment. I did it because it's been awhile since I've played the game and want to re-familiarize myself with the characters, particularly Xion, before KH3 comes out. Based off of the recent trailers, it looks like she might be a member of the new organization, so we'll just have to wait a see what Nomura does with her character :)

I'm entering my 6th college semester this spring. I guess we're going to be suffering through school together lol And I haven't got the new smash yet, but I will soon. I'm guessing it's fun? And thanks for taking the time to send a comment. Anyone who loves Madoka Magica and Kingdom Hearts is a friend of mine (^^)b

Guranto-kun May 25, 2018 5:06 AM
Its much better if you stop playing FGO if you aren't that active or don't have much time to play it cause you're gonna miss some things or possibly a lot of things. Its better to focus on something you really like or want to play if you already invested more time on them. I tried playing honkai impact and fire emblem heroes but I realized I don't have the time to play many games lol so I just stopped playing them. If you really like heroine x she's gonna comeback next year (2019) and on 2020.

Guranto-kun May 24, 2018 5:20 AM
Yeah I'm playing on FGO NA. She's actually my first SSR I started around saber wars and got her in 3 tickets lol but nearly 5 months later she's still my only 5 star servant. I'm currently saving for Mama Raikou.

Guranto-kun May 23, 2018 11:12 PM
Thanks for the add :) and yes my score on Mars of Destruction is a joke/troll like the 10 rating of those reviews lmao because its funny and even if you'll give it a 10 its rating won't move it'll stay on 2 forever lol

Thank you for the feedback and the FR ^^

I should be watching the Mahouka Movie soon.. It would be a pleasure to meet oniisama again.

PrincessZero Aug 25, 2016 11:21 PM
Thanks a lot for the recommendation! I've heard a lot about K-On, I'll give it a try because I really enjoyed Euphonium. If the themes are similar I'll probably enjoy K-On as well.

Predzyyy Aug 23, 2016 10:49 PM
Heres my explanation of why I rated High School of the Dead higher then K-ON!. I'm just not a person who enjoys a show like K-On with a full cast of teenage girls and their pop music. It really isn't my thing at all which is why I rated it only a 6. I rated HSotD higher because I enjoyed it a lot more, The fan service was a bit over the top and the story was a generic I agree but I enjoyed the zombie survival theme that isn't very common among anime, and I enjoyed the action scenes too. That said, HSotD was also one of the first anime I ever saw which made me enjoy it a lot more since at the time I hadn't seen many anime like it before so it was very unique and not so generic at the time for me.

I definitely think Re:Zero is a good one to do. In my opinion, I don't think someone should watch until episode 18 before committing a drop. If they are not engaged before episode 4 (early on I mean.. I can't actually remember specifics that happened :33) then they probably shouldn't go on. It is as you said complicated but I think it started off quite strong. For me, it has become less engaging further into the story. I think that I am only watching it now because I had been engaged in the characters from the beginning and now I have to keep going otherwise it would probably be too much of a cliffhanger for me lol :33. In all honesty though, if I really hated it but I kept pushing for episode 18, I would probably just finish it off and rate poorly on it.

I suppose the most important aspect of anime that keeps me interested is the portrayal of character emotions (it's probably why I like romance and slice of life anime
though don't go looking because I'm pretty sure my actual anime doesn't even keep consistent with that :3
). Anyways, good luck for your future reviews :D