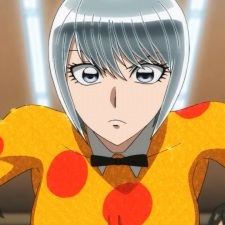 https://myanimelist.net/anime/1347/Bubblegum_Crisis?q=bubblegum%20 (This show kind of gave me a slight "power rangers" vibe but not really, it's about these 4 very lovely ladies who help the AD police in keeping their society and place of living safe. It's also a part of the AD Police and Parasite Dolls Universe. It's a mech show, with a 80s art style, that comes of as a bit cyber punk-ish with the colors, environment and themes. I enjoyed this one over the Bubblegum Crash, and a bit more than Bubblegum Crisis Tokyo 2040, but of course you could watch them all to gather your own opinion on them)

https://myanimelist.net/anime/223/Dragon_Ball (Dragonball lol well this is this first entry [to my knowledge] in the Dragonball franchise, it has some corny-ness, some pretty cool fights, some episodes become a bit "dumb" as it seems to just be young goku doing errands for Master Roshi [the old man], but if you haven't watched already I think this is a pretty cool show, definitely one of the firsts for me growing up)

https://myanimelist.net/anime/47/Akira?q=Akira%20 (Akira... well what else to say about this movie. I won't go deep into it, I haven't checked your list so i'm not sure if you watched it or not so sorry for adding this if you have already lol. Still a pretty good movie IMO, but not as great as most people make it out to be. 7.6/10 for me but I round up to 8)

https://myanimelist.net/anime/4039/Golgo_13_TV?q=Golgo (Next is Golgo 13, This show is like James Bond, meets Chow Yun-Fat in Hardboiled. A show about a professional badass named Duke Togo, who's as mysterious as he is deadly, a ladies man who seems to always get the job done. good show 7.5/10 for me but I rounded down to 7)

https://myanimelist.net/anime/1016/Gunnm?q=battle%20ang (This came out in the early 90s, a show about a "dead/dying" cyborg who is "saved" by a scientist who finds her in a scrapyard. Gally or Alita [whatever you want to call her] soon then tries making a life for herself, but she is then sort of caught up or finds herself in a situation she didn't intend to be in. I have a a slight affinity for Cyberpunk and Steampunk so this just may have some bias-ness to it lol)

https://myanimelist.net/anime/1384/Kyuuketsuhime_Miyu (Vampire Princess Miyu, this 4 OVA show is about a girl who pretty much hunts demons to try and send them back to the demon world or whatever. it does have an alternate version that came out after which is also good. good show I kind of liked the characters, the art, and how Miyu dealt with the shinma)

I binge watch shows like a mother effer so it's a bit hard for me to remember the exact story and premise of every show but I hope out of some of these you find one or some that you enjoyed!

__Duckie Nov 13, 2018 9:06 AM
well I'm at work rn, but if you give me some time (to keep coming back to my phone to talk on here), i'll send you as many as I can today, and you can check them out and see if the shows are something you want to end up watching or not.

__Duckie Nov 13, 2018 8:33 AM
When you get around to doing so let me know or send me the link so I can give them a read. If you every want some recommendations you can either ask me or simply go to my completed list and check out which anime from those decades you want to watch, from there. Are you particular when it comes to watching things or you'll kind of give just about any genre/anime a try?

__Duckie Nov 12, 2018 9:08 PM
yea of course, thanks for thinking i'm worthy enough of the request xD. you said you still needed to finish the 70s version of CH right? let me know your final conclusion on that as I thought it was pretty decent given that it came out in the 70s, Idk maybe I felt this way because the art and how some things seemed to have been translated funny like instead of saying something like "it's a part of him" they would say "it's PAN of him" or something silly lol also Dirty pair is pretty legit, it's like a buddy cop thing where they seem to find themselves in hi jinks and situations, and dirty pair flash is about the same just a "reboot". I read somewhere it was supposed to be a sequel but some things happened and prevented it from becoming so.

__Duckie Nov 12, 2018 8:00 PM
dead leaves was also a good movie. I loved how very different it was and thought the humor was pretty good. lol drill PENIS!