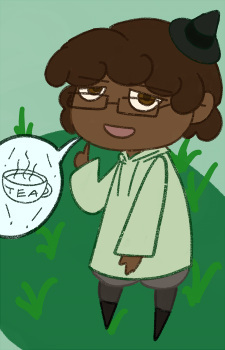 karkki_ May 6, 9:19 PM
Thank you! I'm surely still missing a bunch of stuff on my list, but you're always free to send anything you want my way!

Apologies for not responding to your last message, by the way. I haven't exactly been in the greatest of health the past few months. Been avoiding interaction both online and in real life to focus on meditation and self-reflection. I won't go into the details of what I'm currently going through, but I thought I'd let you know either way, so you don't need to worry! If I don't reply for awhile, you'll also know why.

Kalvus Apr 11, 11:51 PM
You know your lacking in knowledge when you can't even get one row correct for your game in the bio.

Can't really think of any other anime that uses that sort of art style. I can think of some early anime that incorporate pixel graphics when showing an in-world video game. The Aim for the Ace! movie from 1979 has footage of Breakout, for example. Totally makes sense why the use of pixel art didn't take off, though, since, y'know; you could just make a video game or visual novel instead. At least we have Flying Luna Clipper.

AniList lets you add up to 25 entries to your favorites list, so I have a lot more there. I have a link to it on my page.
Oh, that's awesome! I love watching dubs whenever they're good. The whole "dubs r sux ballz!!!" argument really pisses me off. There are so many dubs out there that make the show a lot more enjoyable. I wouldn't watch Yuu Yuu Hakusho in any other way than the dub because Yusuke cusses and that's awesome. I'll be sure to watch Trouble Chocolate in English when I get around to it!

One interesting thing about Malice@Doll is that the camera never moves even once. It's like if you made an anime with the intentions of making it 2D, but you put 3D characters in it instead of cels. The character/monster designs are so memorable and the world is savage and wretched. Everything comes together so perfectly!

SupremeGod Mar 28, 5:52 PM
Thanks I had a nice birthday despite the virus situation

karkki_ Mar 24, 9:56 PM
Oooh, then I get what you mean! Yeah, anime can be so much more than people would initially think. Yoji Kuro and a lot of other artists from that time were just cranking out experimental films. One film maker I've always loved who makes weird shorts is Keita Kurosaka. His art style is just out of this world, man! "Watashi no Kao," "Midori-ko" and his collaborations with Dir En Grey being some of my favorites by him. Oh, you also like Cipher? Then you gotta check out A-Girl!

I could go on for ages listing off shorts I really love. The reason they're not on my list though is because I saw them more as filler entries to make my list look bigger than it actually is. However, now I'm considering adding them back. My goal is to complete every anime in existence, so I'd have to add them back someday anyway. Maybe after I reach 2k completed.

Glad to see you enjoyed Flying Luna Clipper! My love for it is very hard to explain. I love it for a lot of the same reasons I love retro games. There's that sense of abstract surrealism and creative freedom that you don't really see anymore. Like obviously no one in their right mind would release something like Flying Luna Clipper now. But back in the '80s and '90s, people just went crazy with new technology and made all sorts of weird shit. Same thing with X Train; it feels like a movie that Rintaro genuinely wanted to make for no other reason than to express himself artistically.

My favorites list is actually pretty interchangeable. Of course I've seen stuff that you could say are technically better than something like Malice@Doll. I still keep it on there though because it speaks to me on a very personal level and I want to rep it for everyone else to see. In that same vein, I'm glad to see you repping Trouble Chocolate! I haven't heard anyone say anything good about it. Seeing it on your favorites list makes me wanna look into it, though.

karkki_ Mar 23, 9:21 PM
You mean like those dementia shorts? If so, I love those too! It's easy to get cynical after having seen so much anime. Watching something that's just pure artistic expression after sitting through so many terrible TV shows is always a breath of fresh air. Like you said, even if they're not good, you can still appreciate the artistry.

Saw you completed X Train! Glad you liked it. My favorite part about that film is the overall feel of it. It's so surreal and chaotic; there's nothing else quite like it. That soundtrack is also great.

karkki_ Mar 21, 8:44 PM
Honestly I'd be down for anything, as long as you like it. Anime is a vast medium and there is great stuff in every genre. You just have to be open-minded. That's the way I see it.

Awesome! Tell me what you think about it later. That soundtrack is freaking craaaazy, man!

karkki_ Mar 21, 4:56 AM
Just wanted to say I really appreciate the series you repped on the forums! I'll try and check 'em out soon. Feel free to let me know if you find any other cool stuff!

Have you heard of Take the X Train? That's one of my favorite obscure films. Very artsy and experimental. Highly recommended!

Conde_Mohr Jan 7, 1:52 PM
Hi Chane, I'm glad that you liked my PM, even though I knew you would because of how awesome it was. :P

Jokes apart, I asked people for help to polish it a little bit, so not even the whole merit for the first paragraph is mine. What the heck, thanks to you for reading the whole thing, did you see how long it was? Don't even worry about trying the things soon to please me, real life is more important (I don't know if it's updated, but I had already read that you were with your grandma for the winter break. Now you're mentioning months so I hope nothing bad happened), so just do it at your own pace and feel free to hit me up when you do.

how modernized is the Tv adaptation? I see you have it in your favorites so I wanted your take. :)