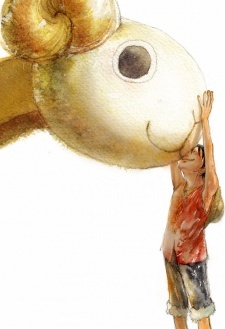 ChibiTalha Jul 30, 2021 11:50 PM
"Everyone who is not reading One Piece should be reading One Piece. It is nothing short of a work of genius and while it starts slow, it gets progressively better. I was depressed for a while and it's certainly helped me in those hard times like a crutch.

All the characters are interesting, diverse, and have their own development arcs. It's not just the Luffy Show Staring Luffy, every single member of the crew gets time in the spot light and chances to grow as their own character while also developing unique relationships with one another. And that's not even to mention the wealth of side characters not part of the Straw Hat crew, who ALSO get time to steal the stage in their own right, making it a joy whenever they show up again in later storylines.

This extends to every fight the crew gets in being wonderfully creative and unique. Every single member gets to take a part in the fight, none of that DBZ "Goku and Goku's family is the only one who matters", even fucking Usopp gets really awesome battles. And for the most part, the storyline isn't just fights all the time that usually shonen mangas delve into but actually has a great story.

The world and setting is also pretty awesome, with some diversity and complexity to the internal politics and cultural lay out, but the best part is there's not really any part of the series where things just stop dead so someone can have a long exposition scene that's boring and trite. Everything plays out very naturally and the audience is able to pick up on how everything works just by watching it occur in front of them. Also Snail Phones. Cuz Snail Phones.

The series is also incredibly funny, but not to the point of losing credibility. Like, there's some cultural differences, but the manga is genuinely funny and WILL make you laugh. It rival MGS in ability to balance goofy comedy that refuses to take ANYTHING seriously, with legit dramatic moments that will make you choke up.

It has been going on for fourteen or so years, and still has about 8 years to finish, but is still a joy to read and go along with, and even REREADING since it has a habit of bringing back up old characters and plotlines that any other show would have long since forgotten and make them suddenly pivotal and important. It rivals Babylon 5 in apparently having all been planned out from the beginning, or at the very least Breaking Bad in winging it to appear as such.

It is honestly a wonderful incredible show, that unfortunately many people will pass over because of the "anime = genre" prejudice, but I feel that those who give it a chance will not regret their choice. Dealing with a variety of times from dealing with lost, happiness, while being the One Piece, I know and love, it's been one of the most influential things I've read."

Aloha, my name is random person in the internet. (Pretty cool huh). I have noticed that you are in the reading Chi no Wadachi. I like this manga and wants to talk to peoole about it. I like the way the author make a scene have more meening that it supposed to be. Like from far away, you would thing this manga has little substance or something, but man it is filled with many stuff. I really likethe slow pace as well. It is unique. As well the artstyle from Oshimi's other works. I was wondering if u are interested in joining a discord server deticated for Chi no wadachi, and as well Oshimi Shuzo's other manga, like happiness or aku no hana. Hopefully there is gonna be a good community for it. If you dont like to join the server you can check the Oshimi Shuzo in MAL. See ya later :)

Tatsuya-kun Jun 9, 2014 2:46 PM
Nice. JoJo is far too underrated in my honest opinion.
And some ecchi anime gets all the hype xD

I also highly recommend Densetsu no Yuusha no Densetsu and To Aru Majutsu no Index.

If you didn't watch it yet, I HIGHLY recommend JoJo's Bizarre Adventure (2012).

Tatsuya-kun Jun 7, 2014 4:23 AM
I read it as well. The last chapters were kinda bad as well. Heck, you don't even get this "OMG, one character might get seriously injured and/or hurt badly" feeling. Because you know this will never happen since "They are Fairy Tail after all!!!".

Well, as I said, it's a shonen made for a younger audience. I prefer series with better themes / storylines and so on XD

japanda Jun 4, 2014 5:53 PM
Hello there! I liked your reviews, especially your One Piece one. It's such a unique show~
Anyway great job :)
All Comments