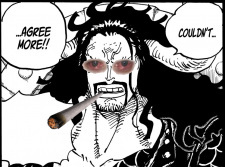 SmolChibi Nov 21, 4:37 PM
What did you think of the new One Piece episode?

Charloss is a Tenryubito who can do pretty much anything he wants. Their family got the invincible slave Kuma on top.

You got Sakazuki as fighter.

Nezumi who's on good terms with pirates who bribe him.

Diamante the hero of the collosseum and ruthless assassin.

Wapol the selfmade king and businessman. He's there to take of care of logistics. What are their enemies supposed to do once he has taken all the doctors of the world?

Spandam is a wild card with his accidental Buster Call.

Foxy as supporting chara. Imagine him and Akainu as tag team. No one would be able to escape.

Satori with the most advanced kenbunshoku and the Ordeal of Balls.

And lastly Trebol as the mastermind.

FMmatron Nov 12, 7:14 AM
You know about their greatness. If they teamed up they could take the world.

Zoro's actor is easily the most satisfying actor from all five.. Mackenyu. You will not believe he have soo much experience. These are the some of his best movies Rurouni Kenshin(the only live action movie that anime community respects), live action Chihayafuru, Tokyo Ghoul S, JoJo's Bizarre Adventure: Diamond Is Unbreakable, Pacific Rim Uprising, Kiss That Kills, etc. I have very high expectations
from Mackenyu, he's just perfect for Zoro's role.

Emily Rudd as Nami... a hot actor for hot role. Satisfied with her as well but only problem is... if one piece become continuous series after season 01, I mean if Netflix is planning to adapt whole series than it will take them 12 to 15 seasons and the age of Emily Rudd is 28, and by the time series ends... she will be 40+ age but for now she is good for Nami's role.

Jacob Romero Gibson as Usopp, and it's ok for me... not bad but not perfect as well... I literally want only one think from Netflix and that's... plz just don't make Jacob's nose long like usopp.

Taz Skylar as Sanji, people having problem with him as sanji but i have no problem.. why? Because here's a photo of Taz Skylar with long hairs 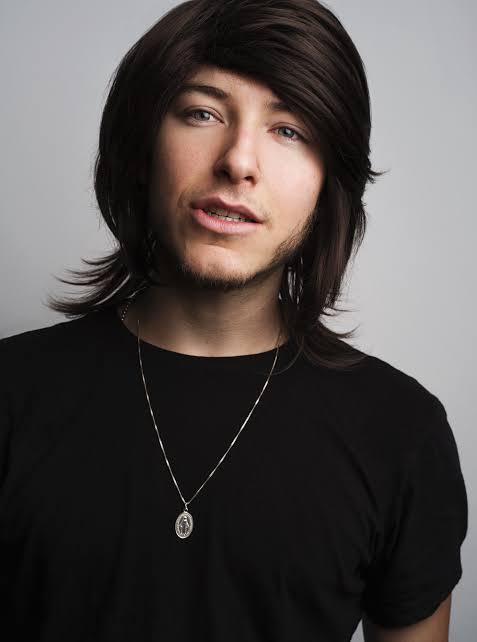 I think, he will be ok if he wears a wig... that's what Netflix gonna do imo.

In total cast is great for me.... some people will always have problem with cast but one thing every anime fan should know that's is... you can't bring a anime character in real life. You have to look one piece characters as real persons and imagine what they will look like in real life, and Netflix have done a splendid job taking cast out but still not that much excited for series because we don't know how story will be going... but atleast this makes final that season 01 will cover whole east blue saga. But tell you truth I'm really excited about live action, i think Netflix have what it takes to pull this off. Expecting other casts to be great as well.
What are you thoughts on cast?

VolKur Nov 8, 7:14 PM
Check out one piece chapter 19 page 9, buggy literally said to shanks "you and this ship's captain... don't treat treasure seriously enough!!".
And I was surprised it's a hint to gol d roger, you never knew when oda is going give a hint.

And then on very next page I found Gaban as well. VolKur Nov 7, 10:49 PM
You should check out latest colour spread again, you will see shimotsuki cross sword sign on "O" of One Piece.... with this now we can say for sure that zoro is a shimotsuki. I didn't noticed this, it was Sawyer7mage(op YouTuber) who noticed this.
WAtch swayer7mage review on chapter 1031. Skip video to 12 minutes and watch from there, oda is mastermind in connecting real thing/history to characters. And watch the full video then reply to me.
https://youtu.be/REi-fNVqsOs

VolKur Nov 6, 8:31 PM
As you know I'm rereading one piece but in colour version and go check out chapter 2 of one piece and then check out reverie arc... coby my boi has grown soo much.... and I literally cried three times while reading chapter 1.
First time shanks lost his arms, 2nd time when shanks giving his hat to luffy and last time I cried after completing chapter 1 because I realize it again that how far I.... no how far we all have came and now one piece is going to enter its final saga in a year or two.
I reread chapter 1 three times back to back and I didn't get bored because shanks character is soo much fun to watch, every time he appears in series that moment become one of the best moment of the series.