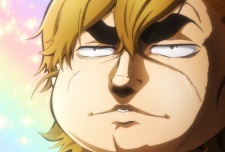 HijikataMayora13 Jan 13, 2016 8:08 PM
Maybe not an expert, just kinda caught up with them thanks to following so many pages. xD lol if you want. I think they're pretty good, Beast is one of my top 3 K-pop groups along with Infinite and U-KISS.
No problem ^_^

Interested in korean music, dramas or shows?
This might be the club for you!
{ It was inactive for a while and it has been started up again - I hope to see you around! }


Feel free to delete my comment if it is a bother!

Mystic_Spirit Sep 4, 2015 8:45 AM
Hehe yeah its been a while ^_^ how's it going? You're moving to dorms or got an apartment of your own? Isn't it a bit scary o.o
yeah shingeki no kyojin last week or so, it was awesome, but you beat me to it, i'm not a trending viewer, hehehe
What about you? ^_^

HELLO THERE my fellow Saiunkoku fanatic!!! I know, i know what you mean by the beauty of Saiunkoku, and I'm definitely glad to meet someone like you! I dont understand how Saiunkoku does not have more fans because it is such a great story!

I meant your future husband and kids (if you have such plans) :D

"how could a girl live on her own in a foreign country?? this is madness!"

you should take a shooting lessons or learn martial arts to convince them that you gonna be alright :P again, SR's manga omg another epic picture! :D Is this also from School Rumble? I don't have a motorcycle so I'll use my bike haha XD

next to find a harbor in Japan, strike that other awesome pose, and walk off into the sunset. I'll definitely do it to honor your request lol too many epic poses to try ><

I imagine how you will spend your last year of university. hard everyday trainings at sunset, striking cool poses and shooting bottles at harbour :D

since you read the manga, which one do you find is better? anime or manga?

anime is follow manga in every frame, they are absolutely identical. but I recommend you to start with anime. Seiyuu did a great job, they also singing almost all of songs by themselves (and singing really good). overall, OST in SR is awesome :3

but it doesn't even last 7 days for me... I forget their names every episode

haha xD you are unforgiving with them, but that's their fault for sure.

It's times like these when I feel like watching an oldie.. I'm thinking Legend of the Galactic Heroes next :)

great anime indeed, very deep and mature, but be sure that you're ready for political intrigues and talks about monarchy and democracy. until then you can watch best sports anime of all time (teh oldschool!) - Slam Dunk :3 but maybe it's just me, I prefer basketball over baseball. Slam Dunk is also very realistic in terms of basketball mechanics and male protagonist is stupid, but funny and strong, just like we like them to be :DD

I think work that you enjoy(aka peace of mind) is more important than money. the only difficulty that I see is your own family, will they travel with you?

my parents want me to become a teacher here in Canada

well, it may be your backup plan :P BUT if they will insist too hard your response must be ONLY like this! What about you though, any ambitions or plans for the future? :)

well, I have a little story of my life and visions of my future, but don't you mind if I tell you about it a bit later? I just can't catch the right mood :)

Alice_North Aug 20, 2014 11:28 AM
the only one manga I've ever read is School Rumble as exception, because the studio didn't made the third, final season.
picture is from that manga. see a character in sunglasses in About Me section? it's the same person from epic picture, Harima Kenji, my all-time favorite character :3

School Rumble was my very first anime (if not counting Sailor Moon from childhood). special for me, like a first love that you will remember forever :D I think you can understand what I mean. It's a random nonsense comedy/romance with strong will, fuck the system decisions, self-sacrifice male protagonist ;) they've release 2 seasons, but then something gone wrong with the studio and the third one was never aired. that's why I read the School Rumble manga.
love it for interesting characters, great humor and complex love story. at first look School Rumble seems like a light romantic comedy without story, but at the end it becomes pretty much a drama. depressive comedy is my tag for School Rumble, if you ask me.
you hate misunderstandings between the lovers. well, School Rumble is misunderstandings after misunderstandings and even more misunderstandings :D but they are all about humor, comedy, non-stop stupid situations.
as much as I want to recommend School Rumble to you I fear to do so. It is completely different from any other romance anime, but still it is a pure romance. Male protagonist is classic shounen character, but all he think about is love. It is a great comedy, but humor is pretty unusual. I DON'T KNOW!

Kill La Kill is also one of those ecchi ones that I'll make an exception for, it's just awesome, especially that nudist teacher LOL XD

agree, I enjoy Kill la Kill's humor more than crazy fights :D but damn, there's so much boobs and asses in every frame that sometimes it's hard to concentrate :DD
thanks for No Game No Life recommendation, I'll give it a shot. :3

I get what you mean when you say you don't like weak male protags.. I don't like them either :P and they seem to be the main characterization for shounen romances these days :/ what a shame. aah, the classic shounen, I like those types too :) They are what give old school shows their charm. And YESSSS Itachi and Ace from One Piece definitely fit into that model :))) Unfortunatley modern anime can't handle such strong characters, if you know what I mean. They all share the same end, siiigh. U__U

I couldn't have said it better. and of course as a true otoko with beastly manliness I've never cried when Itachi *spoiler* and Ace *spoiler* :PP
I think the market dictates. it demands sexy girls of all colours and grey male protagonists whose names and faces I'll forget in 7 days. thus most people can associate themselves with them.

I watch any genres really, except for those harem ecchi fanservice ones

I'm trying to avoid these either. I have a few titles in my list from times when I just started to watch anime and I watched almost everything that came into my hands. now they've got what they deserve :P I make an exceptions only on the recommendation of friends. (for example, kill la kill).

and romance is my least favorite :P

my true OTOKO-heart hurts when girl tells me she don't like romance genre :D the truth is I've always been a melancholic and I enjoy good romance/drama more than good action/adventure (with exceptions).

If I were to guess I'd say you're into old school shounen, am I right? :)

well, yes, I prefer old school over most of new titles (again, with exceptions. Shingeki no Kyojin is great example of modern awesomeness and quality), but there's more. although most of all I appreciate emotions and feelings in anime (drama, tragedy, comedy, love) my favorite type of male characters is classic shounen-model: strong will, fuck the system decisions, self-sacrifice.
I can't really enjoy romance anime in which the male protagonist is weak. even worse if girl dominating over him :D
you can see it by the look on my favorite characters list. :) special example for you, as a fan of Naruto and One Piece: Uchiha Itachi :3
All Comments