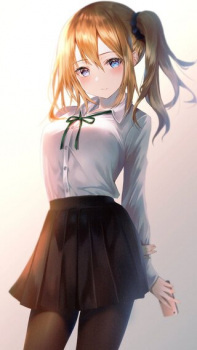 ARK-13 Feb 20, 2:04 AM
Yeah would be sad if she outright gets rejected and she did raise a lot of flags last chapter. But unfortunately it was bound to happen at some point.

PillowmanGames Jan 5, 4:22 AM
Hello :D
Thank you for the Secret Santa Gifts!
I started watching Accel World, and it is entertaining! It's not a masterpiece, but is enjoyable, I will see it until the end!
As for ID:Invaded, I thought that it was already in my PTW, but it wasn't, I plan to watch it after Accel World maybe, but it looks much more interesting, I think I will like it a lot!
I hope your presents were good too! Thank you and have a happy new year :)

ARK-13 Dec 18, 2021 12:48 AM
Oh yeah the sticker. He did say if she ever had anything to say she could just text him that. Yeah that would be nice. Well the finals is soon too. Don't know if you'll get any major development before that. But let's see.

ARK-13 Dec 18, 2021 12:32 AM
Yeah I do think they will bump into Chinatsu at some point. As to what come come next is a bit hard to tell. It could really go any of the ways u said. I don't think Taiki will see Hina romantically anytime soon. But I could totally see the latter happening. But Hina really has become my favorite character. She really had a great characterization. So it's gonna be sad when she eventually has that heartbreak. So I hope Miura builds up Chinatsu properly as well. So one of the outcomes that I want from this arc is for Chinatsu to start opening up to Taiki and having that confession from the one-shot (not the kissing part, I mean that would be good too, but the confession part) later down the line.