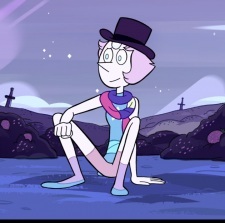 Spindleglass Nov 23, 2019 2:28 AM
yes, and with good reason, the voltrons pacing was aaatrocious :(
YAYYY u wont regret this, i can assure you! gravity falls is the masterpiece for the ages. at first its episodic so u can get used to the characters and such (a la steven universe season 1 if u will) but it soon builds up
hahaha, i thought hilda was a really short series?
oohhh i should give it a try then! altho i have been woefully uninterested in anime for now tbh, but if its cute its good
thank you!

Spindleglass Nov 12, 2019 3:14 AM
Yeahhhhh I should give it another try tbh bc ppl just go BONKERS for it and the fanart is wonderful. So yeah I'll try again avatar, and if I like it , legend of Korra altho i do know how that ends hahah

!???
WATCH gravity falls, srsly, it's real real good, maybe even better than Steven universe and I love it. The plot and story gets just supremely great and the characters are so loveable. No songs unfortunately :c but still great
I watched star vs the forces of evil but I thought it was too childish for me tbh even tho I liked where they were aiming to do with it, and yeah need to try She-Ra too. Tried Voltron and that was a disappointment :(

Watched both Rick and Morty and BoJack horseman and really really enjoyed them. Need to finish bojacks last season tho, bc as u said, it really depends on the mood im at

I have heard of Hilda!! I'll give it a go for sure

Spindleglass Nov 8, 2019 7:48 AM
I really enjoyed gravity falls and over the garden wall. I want to like more western animated series like adventure time or avatar but damn, the first seasons of adventure time are too random xD for me and avatar too slow paced :(( do you have any you recommend?

Spindleglass Nov 2, 2019 12:34 AM
Hahaha, im glad I found another connoseuir of good taste here.
And the pic you just got? With the top hat and scarf? Aww she can't get anymore adorable than that

There's definitely a lot of thing mentioned that made me want to yell something like "YES, THANK YOU!" like how the show chooses to depict it's darker side plainly without explicitly condoning the paedophilia or the Hongou's relationship with her teacher. I know the show very clearly frames them as bad things but never has a character explicitly state it, which is why I think a lot of people got turned off from it. Also, nice job on doing the extra research. I went and fact-checked that bit near the end about Mari Okada's truancy, just to make sure, and it's pretty much on point. You didn't have to go out of your way to find that out and incorporate it into the review, but I'm glad you did.

There is one point I personally disagree with, but it's nothing major. Where you say the characters speak their thoughts more-or-less unfiltered, I felt a lot of the show was kind of the opposite, and a lot of the conflict was created by character not being able to say exactly what they're thinking, or trying to and it coming out in a way that causes unintended harm, like when Izumi tries to explain to Kazusa how he feels about her and accidentally blurts out "I've never wanted to have sex with you!" and then realises his mistake immediately afterwards.

Overall, a really good review. It's probably better and more thought out than anything I've written to be honest, especially since you said it was harder to write in English. Oh, speaking of, there was a thing with some of the grammar that I guess just went unnoticed. There are a few times you use the word "is" on it's own like starting a sentence with "Is funny..." or "I feel like is so..." when the correct way to write it would be "It is funny..." or "It's funny..." and "I feel like it is so..." or "I feel like it's so..."
I'm not a grammar nazi, I promise.

ChilliePeppers Sep 18, 2019 10:28 AM
I guess Sarazanmai's a good place to start with Ikuhara. I think it's one of his best looking shows, but then again all of them look good. Out of all his work, I think Revolutionary Girl Utena's probably my favourite, if only for the movie sequel, which is absolutely beautiful.

As for Fall... I think most of what I'm gonna be watching are the sequels. HeroAca, maybe Psycho Pass but I think I might wait on that one. There are two that I want to try simply because of how absurd their premises are (GunFace and Suplex the Princess). That's, pretty much it though. I'll probably try a lot more because it's something to do when I'm bored, but I don't expect to stick with many of them.

ChilliePeppers Sep 17, 2019 12:39 PM
You're pretty good at English, I would not have guessed that it's not your native language. Good luck on the review too, sound like it might be interesting.

I did watch the first episode of Given, but I currently have it on hold, as I just didn't have the time for it. Aside from the ones I already mentioned, not that much has stuck out to me this year. I just looked back through this year's earlier seasons and the only ones I completed were Sarazanmai and Mob Psycho 100 Season 2, both of which were great. How about you?

ChilliePeppers Sep 17, 2019 8:50 AM
Oh thanks. I like a lot of stuff in your favourites too, like Shirobako and Toradora.

Yeah, I've been keeping up with C&T week-to-week since it started. It's probably gonna be my favourite show of the year, but I hate reading the forums about it. Same goes for Vinland Saga and Maidens of the Savage Season. I'm writing in there every week because I thought it'd be good writing practice (and it is), but it also means I end up reading a lot of weird and sometimes plain wrong posts about the shows. It's not a practice I'm gonna stick with for future seasons.

Zerity Feb 21, 2019 5:47 PM
omg Yotsuba that shit is funny. its legit just child banter and its fucking funny. u need to read it. very cute

how is beaster been wanting to read that for some time