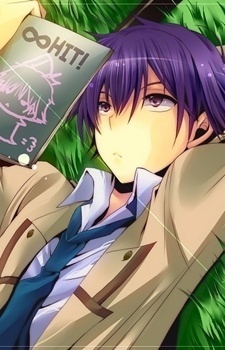 sspatel_55 Apr 6, 2014 12:43 PM
hi there i really enjoyed your profile! I believe I've seen your posts in all sorts of shounen mal forums..do you still use MAL?

Kvshi Aug 2, 2013 8:07 PM
Nice animelist man! I've noticed that our tastes are very similar anime and manga wise. I also keep seeing 20th Century Boys on a bunch of people's mangalist, but I never fully read it yet. How good do you think it
is also the same with Clannad and Clannad: After Story? Also glad to see someone else who reads id and few other Korean manwhas. Some that are coming out now seem promising especially Korean webtoons.

Dr. Dray Man is already on my PTW, & so is Death Note. Hee. The reason why I still haven't seen Death Note is because I dropped the manga awhile ago

after the death of a certain character -coughs-
, & I don't want to watch the anime before finishing the manga first. Another MAL-user recommended Psycho-Pass to me, so I'm currently watching it now & am loving it! Only a few eps in but I'm already certain that I'll give it at least an 8!

I've been hearing a lot of good things about SnK. I'm going to try to endure & wait until it's finished airing before I start, though, like usual. Hee. The only show that I absolutely cannot bear to wait for is HxH… So exciting. *-*

Ohoh. AP exams -- so you're one of those over-achievers. ;-p I'm sure you were able to pass your exams with flying colours. A lot of good unis in the West Coast, so I have no doubt that you were able to get into a decent one. Have you decided what you'll study in uni yet? :]

I took up your advice and started reading Holyland. I haven't, however, made much progress through it since I've been more in a mood to watch things moreso than to read (though it's usually the other way around).

As promised, here is my impression of it thus far: I really like the plot, but at the same time I feel quite dissatisfied with the quality of art & writing... The former I don't mind so much, but the latter really affects my enjoyment of the manga. It's also to do with the poor transitioning from picture to picture/scene to scene -- if that even makes sense. Similarly, I find the dialogues to sound a bit clumsy. I'm not exactly sure whether it's a fault on the author's part or whether I ought to blame the translating group... but the writing sounds incredibly untrained overall, & I'm only enduring through it because I really am drawn to the story itself.

Obviously, I only bother to ask for recommendations from you because I quite like your tastes in anime/manga. :] So yes… I hope you'll continue to toss plenty of titles at me for my own indulgence. Anime recs would especially be appreciated, since I'm desperate for a new show to start. Hee. :D

Oh, and I hope your semester is advancing smoothly -- from your profile it sounds as though you're about to graduate, so I wanted to voice my congratulations. :]

soy-power Apr 16, 2013 2:37 AM
–phew!– I was hoping to receive some recommendations from you. :]
Hee, those have definitely gone onto my Plan-to-Read list. I'll start reading Holyland now but will save the other 2 for later, as I have a tendency to become horribly vexed when it comes to waiting around for the next bits to come out-- especially when it's a show/story that I'm enjoying (e.g., Tower of God).

I look forward to reading these with lively anticipation, & if I were to end up liking them, I'll definitely take the liberty to come to you for more suggestions!

I'm taking brief hiatus from reviews right now as the Fall series just started airing and not much to review on. The only show I might consider reviewing would be Kokoro Connect although it hasn't finished airing yet. Unless MAL separates them into two different sections, I might hold it off for awhile. As for the reviews, it's pretty well written ;)

Nice Tiger & Bunny review btw. I also found the writing to be...kinda blend, cliched, and sort of stereotyped but ultimately found the series to be entertaining with its superhero factors. I also did gave it the same score as you, with "8".

EtnaEraclea Sep 22, 2012 3:21 PM
Hi there :3
Just passing by here and i couldnt avoid to comment your DP: cool noda DP *w*/
Don't you happen to have the link to the original (bigger) pic, do u? :o
Anyway, sorry for the random comment XD;
Have a good day~

Kurano Sep 9, 2012 11:01 AM
Well, that's true, but that's considering that anime has so much fans around the world. Finding a fan that lives in Cali is pretty hard to do. Hell, even finding a person the same age as me on MAL is hard to do! XD

Haha, pretty much. Though I'm gonna redesign my profile layout soon and taking out that wallpaper sadly. But my list design is gonna take a long time so I don't see myself taking it out anytime soon.
If you'd like, I could give you a preview of my design, though it's nothing special yet.

StormSurge Aug 9, 2012 5:15 AM
GRRR thats it your sig has inspired me to marathon one piece. I have not watched it in 4+ months and i am going to marathon 336 episodes in 8 days probably not gonna see my family and friends for awhile... wish me luck.

Jets Aug 5, 2012 2:45 PM
Since this was my first year in which I went to some anicon, I currently only have 1 crossplay. A lot of it was due to the fact that I didn't do too much planning in general. Besides Otakon, I went to Anime Expo in LA. That one was far more 'local' for me.
In certain parts of the parts of the convention center, it was fairly cool, but it was stuffy in other parts where there was a lot of people. The body-heat can often be killer too.
But yeah, outdoors in Baltimore was an absolute nightmare.
It was especially bad when I wore my crossplay. Even when I wore jerseys and shorts, I still sweated like crazy.

Did you like Phantom: Requiem for the Phantom overall?
I discovered it on my own, and I'm glad I did. The 'action' part was a nice change-of-pace and the story and characters were well-developed too. I also liked the 2nd opening song.
As for what happened,...


I think Ein killed Zwei with a gun. And then she committed suicide with like the poison from the flowers (if I remember that scenery correctly).
Another common theory is that the farmer who went by in that cart might have been a disguised Inferno member, and he/she ended up killing them both.
What do you think of that?