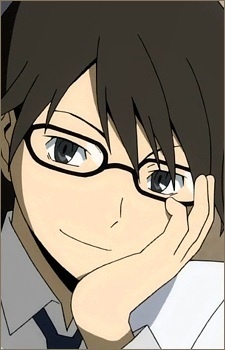 Puchkov Jun 15, 9:17 AM
Happy birthday bro! It's been a long time since we last chatted, so which is the best Anime that you've watched in the past 2 months?

Puchkov Apr 22, 2:13 PM
Saenai Heroine no Sodatekata is one of those Ecchi/Harem in which all girls can be “best girl”. This Anime like the vast majority, relies on tropes and archetypes; however, it does a splendid job to breathe life into these characters. The sense of self awareness, playing with trope expectations and balanced personalities was gratifying.

For example, Eriri Spencer is a Tsundere; although she is never portrayed with a vicious nor aggressive attitude. I’ve to admit that I really enjoyed her personality.

My favorite girl was Megumi Katou; she doesn’t have any remarkable trades and may occasional go unnoticed. It’s difficult to describe why she is by far my favorite girl; she is definitely cute, and her dialogues with Tomoya are the best part of the Anime. Megumi does not actively pursue Tomoya, instead she wants Tomoya to fall in love with her.

I know this may sound simple; however, in the realm of unrealistic male fantasies where females drop at the feet of males for no reason at all... Megumi brings something refreshing!

Now moving on to Gakkougurashi; in simple words, this Anime is an insult to the Zombie genre!! Anyone that has watched old school Zombie movies, or even The Walking Dead has clear expectations of which key elements have to prevail. I’m totally fine with Anime having the “Japanese” touch, although there are certain elements that cannot be changed.

I don’t want to go into details, due to inherent spoilers, so will simply say the last two episodes ruined this Anime for me.

Let me cite an unrelated example. In the Twilight movies and under the sunlight, Vampires glitter like diamond instead of burning down to ashes. This is absolutely ridiculous because everyone knows the basic lore of Vampires. Did anyone think this would be a good idea? In the same way, Gakkougurashi makes a similar (and terrible) mistake.

Puchkov Apr 14, 2:05 PM
I completed the 2021 AWC (easiest difficulty level) back in February. As you pointed out, I don't like the bingo system and wasn't willing to spend unnecessary time participating this year.

Basically I did the AWC simply for the badge lol. In the past few years I've invested quite some time in the AWCs, and honestly I wanted to take it easy this year.

funbar Apr 1, 3:52 PM
Hiya, how has the NBA scene been treatin ya? I've actually been pretty hooked on it since the Bears seem to be going nowhere .. we'll see when it comes to the draft. Baseball season also starts up again, so we'll have some other stuff to watch. I'm sure you heard of us picking up Vucevic as well as some other players, right? I've been super excited to watch the games as of late, even though we haven't won a single game since the trades happened.

Puchkov Mar 30, 10:02 AM
I noticed you expanded your favorite people list to 6. Didn't you say once that you wanted to keep all favorite lists at 5?

Puchkov Mar 22, 9:40 AM
Costa Rica maintains the pandemic restrictions; however, we’ve a relaxed attitude. Personally, I stay at home as much as possible and keep social distancing. Now, my life hasn’t really changed since I started my new job last July (different role in the same company).

Yowamushi Pedal Grande Road and The Anthem of the Heart are the best Anime that I’ve watched in the past 5 weeks. The latter is such a great movie!

Jun Naruse is one of the best Kuudere characters in recent years (you know I’m still watching 2015 Anime). The story invests considerable time depicting her trauma and the effects on her behavior. Even though she doesn’t speak much, her facial expressions and body language are incredibly cute; especially when she is happy. Here I remember the scene where Takumi is playing the piano for Jun for the first time, and Jun’s reaction is so lovely.

Takumi on the other hand, is the best main male archetype for this story; he is supportive, has a heart of gold and makes perfect sense when girls fall in love with him. The ending is not what I expected; however, A-1 Pictures should be applauded for their little twist.

Daiki was the biggest surprise; he starts like a bully and then his character naturally evolves into manly hood.

Puchkov Mar 17, 8:37 PM
1000 completed Anime!! So, have you discovered the secrets of the Universe, or would you say there's still a long road ahead?

Puchkov Feb 2, 12:00 PM
Tenkuu no Shiro Laputa is my favorite 1986 Anime. Like many other Studio Ghibli movies, it's simply beautiful. Filled with creativity and a clean narrative that delivers a heartwarming story that anyone can enjoy.

Puchkov Jan 9, 7:45 PM
Not sure if you noticed already, the AWC went back to the Bingo system (my least favorite system). Have you had a chance to check it out?

Sethlans Jan 4, 8:23 AM
Hey man. A bit late, but just wanted to wish you a happy new year! Let's hope this one is at least a bit better for everyone.

Puchkov Dec 31, 2020 8:37 PM
Happy new year! Since you've completed the 2020 AWC, here comes a mandatory question: which was the best and worst Anime that you watched?

funbar Dec 25, 2020 12:03 AM
Should've brought this up a week and a half ago, but what a crazy game your Browns had. The final score said they lost, but I think both teams won that day. Tons of highlights, tons of actions and a bunch of drama sprinkled on there calls for one of the best games of the season for sure. Lamar Jackson was definitely a huge meme for having his "cramps" and we'll probably hear about that for the days to come. Also, that safety at the end was one of the worst things ever, haha.

I think my Bears look okay right now, mostly because we've been playing weaker teams and have Trubisky playing at a decent level. The most important that he contributes is his ability to run. This gives our own running game to actually have some options. Montgomery has been on a tear ever since Truth Biscuit came back and it's no coincidence. Hopefully we don't get routed by the Jags as that'll be super painful to watch. I doubt the Vikings will beat the Saints, but you never know. Also, I hate the LA Rams because they lost to the Jets, haha. The Steelers are also looking super shaky as well.

I'm excited for the Raiders vs Dolphins game as long as Mariota is starting over Carr. Tua and Mariota are both from Hawaii and they went to the same high school apparently! That kind of stuff is always exciting and I bet you that game will be super entertaining to watch. I missed watching Mariota play.

Wow, you guys get tested every Friday? Is that normal for your country or is that common throughout Europe? I'm sure the rest of the world knows, but America has sucked at everything when it comes to dealing with this pandemic. In a span of 10 months, we have only had a total of $1200 USD given to families to help get them through all of this. Just for context, rent is $4000 USD for 1 BR in New York. It's pathetic and our country has let itself down. Hopefully the end is almost near as the vaccines are making their way out to the public.

Your job sounds awesome! Also, not really. The toughest part about working from home is that you never officially leave the "office" so, it almost feels like you're working 24/7 some days. You just don't have that change of scenery, never get to escape from your family and are not able to really have any face-to-face interaction with your co-workers. Tsuki ga Kirei was cute! I actually didn't expect it to be a romance anime tbh, haha. I don't really read the synopsis and just let the anime be a complete surprise. I just go off of the score and the thumbnail pic. Have you been watching anything good lately?

No worries! I can't respond to every point that you make, but I do make sure to read them and I appreciate it. It's always a ton of fun talking about sports and anime, hehe. Also, merry Christmas and happy holidays to you!

funbar Dec 8, 2020 10:42 PM
Congrats to your Browns for having a crazy 1st half. Wish the Bears could've had a nice outcome too :'(. We pulled a Lions when the Lions lost to us the same exact way before. Also, I have always wondered why they don't let more kickers try that. Sometimes, you just know the game is out of reach and instead of taking a knee or going for a hail mary in the final seconds of the game, why not try an insanely long FG? Granted your kicker has the leg, of course.

It's already been a crazy week since we last talked. I think Washington beating the Steelers was probably one of the biggest surprises. Although, after watching how the 1st quarter went, I knew Washington had a shot at the upset.

How has the lockdown been treating you? Are you staying at home more or still need to go out for your job/sanity? Thankfully I am working from home, but I have grown weary of being trapped within my own walls. While it's comfortable, it's too much sometimes.
All Comments