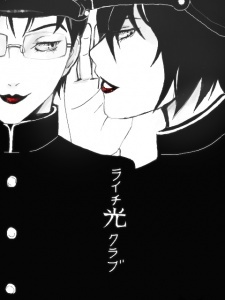 Kurt_Irving Mar 26, 2019 6:54 PM
Hello miss! interesting taste you got and I'm generations apart from these massive teenage audiences MAL has.

mooncrypt Oct 16, 2017 8:54 AM
How's Saiyuuki last season? I'm a fan of the original season and OVA with all it's flaws, but Gunlock and Reload were just bleh, too boring. Damn, I still must check some of your favorites. Never gave a chance to UN-GO and Psycho-Pass.

Corrode_Blossom Aug 9, 2016 3:05 AM
Thanks for accepting my request. :)
A fan of Usamaru Furuya and birthday on the same day, what a coincidence! :D

Error205 Feb 3, 2016 7:42 AM
It's a pity because I really like the first season but also think that the third season will not get better better. Maybe the overused the whole idea but it's not as appealing as it used to be during season one.

Boku dake ga Inai Machi is really good, maybe I'm a bit biased because I like the manga but the adaptation is beautiful (I especially love the way the use the colours) even though the direction has some problems; the use of the camera and the music made a few things even more obvious than they were already for example.

Ahhh... Active Raid... More like Poser Raid, I think someone who looks for mindless action can enjoy it, it has fancy battles and decent animation but other than than it's a bad copia of Patlabor x Psycho Pass with lot of battle shounen elements. I wonder if it will get better in the future (since they've planned a second season already) but to be honest I don't think so. I hope they will prove me wrong though.

mooncrypt Feb 3, 2016 5:03 AM
No I haven't watched any of the series you mentioned, just added Ranpo Kitan to my ptw list, thanks for the recc. Other hand I did read all of the mangas you told. Unfortunatelly I have more than 2.000 books in my library but the only japanese guro physical copies I have here are Panorama of Hell, Maruo's Laughing Vampire and Uzumaki deluxe edition. btw, Kago Shintaro just made two cover arts for my Esmectatons albums. Most of the japanese titles I watch and read are online. My physical copies are mostly european comics like, grotesque & surreal stuff, underground adult sci-fi and 2000ad series. I would like having more of ero-guro but you know, isn't safe to keep such things in my collection currently. But I still gotta buy Mr Arashis Amazing Freak Show, since it's one of those rare eternal masterpieces IMO. You should get "The Best of Milligan & Mccarthy", one of my favorite books. This duo made really sick stuff!

mooncrypt Jan 27, 2016 6:18 AM
I'm ok too. Mostly reading novels and looking for surreal movies. And also, nonstop making music (there are more than 20 albums on my bandcamp already, where I'm recording 90% of the instruments). Any reccomendation for new shows and stuff? Oh, check your inbox.

Error205 Jan 27, 2016 4:22 AM
Hahaha, yeah I also agree with that, the second season was not rally good, it was almost like they decided to use the stories they had available and rejected for season one. Season 3 started ok but I think the whole premise with the strange creatures and how they are presented worked better in Kagewani, like I'm pretty sure I'd freak out if I show a gigantic spider with human heads as... shoes... But it looked kind of funny nevertheless.

Error205 Jan 11, 2016 11:22 PM
Yours is pretty interesting too, you have a few titles that I don't run into often when I check out other lists (like Sakigake or B'tX for example).
The fact that we have the exact same amount of completed series is kinda funny XD

Night_Fowl Apr 6, 2015 4:01 PM
Yo! My London friend we havent chatted and I cannot remember when we added each other but.. Would you like to chat and maybe become good buds? :) Hello fellow BL fans! This is our April 2015 Newsletter! Hope you find it informative.

1. For April, we’ve got a couple from Tokyo Ghoul! The Ayato x Kaneki LE card thread will open on April 1st ~ Check it out and put in your request for cards here.

2. Vote here for the next couple of the month!

3. Our next mangaka of the month is Yoneda Kou and you can pick up your LE cards here starting April 1st.

4. Now hiring: BL Obsession is the largest BL club on MAL, and we need a lot of help! We are currently looking for layout makers, active card makers and help with newsletter delivery -- please apply here - provide samples if you can, and the requirement is that you should maintain reasonable communication with other admin in the admin thread, and make cards when you can. ^^

Have a wonderful yaoi-filled day!