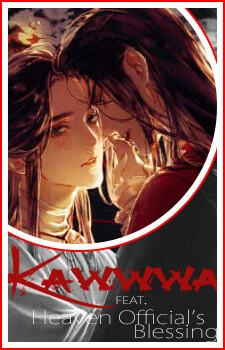 Seraphe Yesterday, 10:36 AM
Hi, Kawwwa! I appreciate you stopping by and look forward to getting to know you. :)

Haha yes, we very much run in the same social circles and it's always nice to see your name pop up around FG (even if we support different ships ;P). Hm...I honestly like Kawwwa much better for some reason, but don't be surprised if you gain a new nickname from me at some point! You're also welcome to call me Seraphe, Pastelle/Pasta or whatever, really. :P

I was just looking at our affinity before replying - I had not even realized how much we shared until now. We must share some brainwaves haha. One of these days, we need to have a conversation about our favorite shows. :)

Okay, well I always like to ask people what mythical creature they'd prefer to be and why! I enjoy fun questions lol. Oh yes, I don't have much of a biography, but I'm happy to answer your questions. I am from the US and work for a consulting firm (right now, we're working from home because of corona so we have some flexibility like wearing slippers to Zoom meetings lol). But I am looking to start graduate school in the near future. How about you? Are you originally from Poland?

Also, I couldn't help but notice that you also love spicy food. Niceee <3

Crow_Black Nov 29, 5:55 AM
Heheheheh my mistake i meant your username Kawwwa i just woke up pretty early this morning so yeah my head is a bit fuzzy. So sorry about that.

Anyways, i better get going i have to go out and pick up some groceries and do some housework today. So catch you later.

FurryLilProblem Nov 28, 7:46 AM
Just wanted to pop in and say that your Vampire Knight profile is gorgeous!

Crow_Black Nov 28, 6:31 AM
Oh hey i'm actually thinking about taking an online course next year so i can work on being a librarian in case my current job isn't sustainable ennough and its also been a childhood dream of mine so wish me luck on this endeavour. And i've been doing well as of late i'm actually super busy with work and i've been helping Nette kick her drug habit so wish me luck and here's to next year not being a total cancerfest like this one.

-iva Nov 28, 6:00 AM
ooh I'll keep that a secret~
You're really good at it! <3 I agree too haha, Yui's so annoying smh
The thing is... I got spoiled quite a bit regarding the second season ;~; I'll still surely watch it soon though :) I might have to rewatch the first season because I forgot everything lol

-iva Nov 27, 9:51 AM
aww tysm <3
ohh I'm too broke lol but I love your profile layout soo much oml it made me raise my previous rating for Vampire Knight by 1 :P I'm yet to watch the second season though smh

Polycythemia Nov 24, 4:26 PM
wtf I'm sorry but that's absolute dogshit logic.... didn't know masks are controversial issues in other countries too??? I thought it was just us who were the international clowns lmao... also surprised you guys are still maintaining in-person schooling :o

Polycythemia Nov 21, 8:04 AM
awh thanks! I missed interacting with you on fg too :)
hope you've been staying safe despite staying busy! what a crazy year this has been.. :pensive:

ramynificent Nov 20, 11:21 AM
ill just call u fräulein thats like the german equivalent to madam
will that suffice, fräulein?

Gator Nov 20, 4:35 AM
I see, well since I took my sweet time with my reply as well, I guess it won't matter much then haha

Oh damn... I did forget indeed, will send one asap O_O True true, though if I'm hyped to travel somewhere I usually inform myself all the time anyway. I can get quite hyped about such things and think about almost nothing else 24/7 ^^

I heard about that, it was in the news for a while. I'm actually surprised of the state that Poland is in, I always thought it's a pretty progressive country, similar to Germany and Austria T_T Eastern Europe is really a mess right now... Protests in Poland and Belarus and hungary's premier minister is awful as well from what I hear -_-
Sounds like the story went down a rather lucky path then, given that they still love each other by now. Crazy to have a child with 18 and marry, I couldn't imagine doing that at all with 18, wasn't mature enough at all with that age haha.

Our PTW lists are of similar size, so I know your struggle. I'm not really into rewatching, but Ranma and Inuyasha are two shows I never finished, so finally doing so is kinda mandatory ^^
I will :3

Hehe good to hear, well Passione did a pretty good job recently with pretty much everything that they adapted as far as I'm aware. Especially in the fanservice department, though this was not such a big thing in the old version. Did they expand on that in the new one? :>

Obviously, which guy doesn't want some boobies? Except for the gay ones of course xD Pretty much yeah, I tried to avoid the term "sausage fest", but yeah that is what comes to mind when thinking of HxH haha. Action scenes are great in the Madhouse version, not much to complain about there. I wouldn't call the protagonists dumb, but they can get quite annoying at times imo :3

I'm always up to play some guitar, so of course xD That's actually a very accurate translation of Google, I'm surprised! It doesn't sound very sexy though or does it to you? ;P Maybe not permabanned, but I would surely get in trouble, even if I was tagging it nsfw lol

Woah, that's a pretty fancy looking christmas market. So many lights :O Sounds like they offer the same things as any other christmas market though, but the atmosphere is probably different. I had no idea Germans would run a christmas market in London haha, though I guess we even saw some at the "Oktoberfest" in Tokyo, so I shouldn't be surprised ^^

What am I to say with 32 then? I'm completely worn out just by running for one hour and could sleep like a stone afterwards xD

Oh don't worry, my bank account is nicely filled. Even if I wouldn't have a job right now, I could definitely sustain myself through the pandemic ^^ Thanks, I hope that I'll like it as well, hoping for nice colleagues mostly :3
I can indeed, it's my main hobby currently with sports being quite limited xD

Haha I can sooooo fell what you're saying here. I usually have a few threads in the FGs which I look into and sometimes I post in there and then leave again for another day or two. Really depends on your mood.