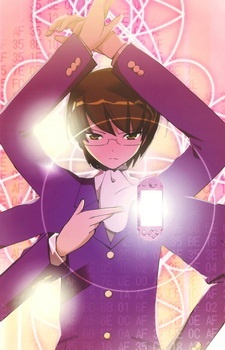 Killuan Mar 29, 2013 11:33 PM
They didn't have much time to spare, unfortunately. But honestly, Fate's character character is really well developed already. I guess she just needs some more dialogue with her new family. That always leads to heartwarming moments.

Do you mean beyond what she was developed in the A's series? Since I don't think they removed many of her developmental aspects of her character in the movie...They mainly shortened all of her battle scenes.

Though a slice of life ova would be nice. I'm sure you heard of the new movie being released, did you not? Nanoha the movie 3rd, Reflection.

Killuan Mar 28, 2013 6:08 PM
Before anything, I'd just like to mention that you don't need to feel obligated to respond with a long-ish reply if you don't want to. I'm just venting some of my thoughts. Hope it's not a bother. :3

Hah yeah, well Fate may not be real, but she really does hold a special place in my heart.

While we're at it, I picked up on something else.

Nanoha has always initiated handholding before with Fate feeling reassured. At the beginning of the movie, Fate held out her hand and waited for Nanoha to take it- probably thinking she’d just shake or something like that- but Nanoha grabs on with both hands and gets all intimate because that's Nanoha for you. Fate was always afraid of initiating intimate affection. That’s why Nanoha looks so surprised when Fate does finally grab her hand.

While Fate was trapped in that dream world and she realized there Nanoha and her family need her- she was told by her big sister even. It was something she was unsure of before- “I was useless in the end”- but trapped with this fake family, she realizes no, my real one needs me more, I need to get out of here and help Nanoha. And she does! She saves Nanoha, just like she promised she would in the last movie- “next time, I’ll save you”. And she’s finally able to move on from that place where she feels useless and trapped with the ghost of her mother. She has confidence in herself, she can move forward, and now she’s comfortable taking Nanoha’s hand, in comforting Nanoha, instead of always waiting for Nanoha to take her hand, instead of feeling unworthy of her.

You can sortof see the subtle change with this gif

Killuan Mar 27, 2013 5:02 PM
Well yeah, I agree...From a technical standpoint Fate's not a whole lot different than her A's series counterpart. But that's certainly not a bad thing, amirite? What about Fate's little chat with Lindy? I thought that improved upon the Garden of Time scene because they were directly linked in a way. Not to mention that Fate reconstructed Precia to act like Lindy in her dream, as shown when Lindy and Precia both touched her face in the same place.

Anyways, I've always been a sucker for her tragic backstory. I just wished she had a bit more action scenes, though I think the scene where she cleaved the drill to save Nanoha was pretty bad ass.

Yeah, Reinforce was a lot better in the movie. She had a lot more focus too so that helps. She seemed more human, and that she genuinely cared for Hayate and her Knights, yet she was unable to do anything about it--Because she's more or less a broken program doomed to be the death of her masters.

Hayates best thing in the movie was her kansai dialect, imo. Kana Ueda seemed to better portray her character. She had some nice scenes though. But like Fate, they were more or less the same to the series.

Hmm really? I liked her in the movie, though I thought she was fairly similar to her movie 1st counterpart. Assertive, trying to help people in need, etc.I will say that she had the large majority of the fights though, and the Reinforce/Nanoha battle was definitely pretty to look at. Nanoha reminds me of a loli version of superman. At times, I do wish she had some favoritism in her..But I cant help but feel she likes everyone equally.

Do you mind giving me your opinion on what you thought of each main character of a's movie?

Or anyone else you thought was good.

Here is my Review: Though admittedly, I didn't post as much about Fate as wanted to, but people wouldnt take me seriously if I was just raving about Fate 80% of the time, lol
http://forums.animesuki.com/showpost.php?p=4605071&postcount=609

How's your life and all? Tell me some news BRO!

Yumekichi11 Oct 2, 2012 3:58 AM
THIS IS AN ANIME ONLY DISCUSSION POST. DO NOT DISCUSS THE MANGA BEYOND THIS EPISODE.
----------------------------------------
I am only listening this for the Director cause he was involved in Kimi ni Todoke, I personally hate the shit head Haru and like Shizuku so much that I got her into my harem and frankly speaking any guy who hits girl should die in hell seriously. Haru is fucking shit compared to Haru and I beat this shit anytime. Let’s see he handles a 450lbs in the face. Other than that my thoughts follow.

About the per-presentation, it’s quite simple in the list outlining a good amount of them.


So that’s my take even before the OP started. Quite interesting elements as one can see to grasp the viewer.

About the OP, here is my take on the OP per element in the list. Head well most are credit free.


So in conclusion the OP being this colourful surely is meant to be happy however with Haru in it, it just makes me want to punch him.

My first impression of Shizuku in the following,

Is super MOE! Instant shy face love. Certainly Shizuku was quite something there after having a kiss. I liked her face there and reactions but I HATED the brutal shit Haru did to her as in grabbing her but it does not even end there!

About random comments, oh dear the start in the spoiler

was already attempted rape. THE FUUUUUU? It was rather deem of a barbarian. Call the cops! Quick!

Now if that was not enough, the spoiler

clearly shows Rape #2 or attempt at least. Haru does threaten her with rape so that says loads already of him. I would FALCON PUNCH HIM! Since I go to gym, I am fully confident of it. Even if it was a joke, it was in plain bad taste.

Now here is something funny. Haru can MOE the shit out in the spoiler

rather well and WTF that he can do it? Weird guy after all the shit he did early, you would think he has a mental bipolarity there. However it seems he is much worse in the spoiler

apparently dumping drinks of anyone for that matter is OK if they say shit he does not like. Well I got bad news for him, someone will beat the shit out of him if not shoot him out of Rage.

Now I do admit he was surprising in the spoiler

cause he does protect Shizuku who does stand up to him to protect his values.

TBH things in the spoiler

get rather TOO QUICK! THE F IS THAT? A hug that fast and rather not so meaningful but somewhat emotional good enough for me. Then I FACE-PALM! Haru saying sexually. Damn guy sure says stuff.

So based on the following spoiler

the jokes will be dirty at some spots? I hope the service gets not too dirty considering the director of Kimi ni Todoke is doing it, surely he would not like such scenes to direct at the very least IMO.

Then comes the shits of shits in the spoiler

Shizuku gets hit by Haru. She has a bleeding nose and with luck it’s not broken. Haru loses his temper due to thinking about delusional shits most likely. I think I would hit him bad there. The guys around him are little match stick shits with no muscles. I would fucking teach Haru a lesson. NEVER HIT A GIRL SHIT HEAD!

Despite all the following,

gets even more demented as the kiss is in fact is done with sheer force and grasp. Not that Shizuku minded BUT I DID! The ways it was done was terribly aggressive.

So in that being said I like Shizuku in general and her girls but Haru pisses me off and I wonder how he will change to that affect cause so far I want to punch him and beat him for that nose hitting.

BTW Image Stitches and Pic Dump done in the BLOG:
http://ecchiking99.blogspot.ca/2012/10/image-stitches-and-pic-dump-of-tonari.html
If you want Shizuku and Haru stuff. You need to go to my BLOG.

Yeah same reasons as you too. Among my own that I like Yuzurina for.

Her evil smile just wants me to do it with her but I want that evil face while I do her. Just saying.

Yeah that face is enticing TBH.
All Comments