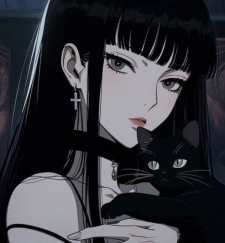 NazgulKing Nov 5, 2:28 PM
You have a shadowy aura about you. Sleeping well?

WutIsDis Oct 29, 5:32 AM
That's very nice. Being a librarian must be very... peaceful? Like here I am sitting with a bunch of idiots who can't stop shouting for a single second lol.

Yeah I noticed that since the "lord and savior" of CD got permabanned, I guess? MAL has also become prettier, especially the new design for the community poll system.

I am doing fine, mostly. This year has been more hectic than any of my previous years in school. But I still have time to play video games and stuff. Don't really have much time to watch anime these days.

Meusnier Oct 17, 9:39 PM
Please tell me what you thought about them!

But this book is masterfully written. If something written with a great style isn't literature, then what is literature? It is also hard to judge the last 90 days considering that what happens is only sketched. Without the usual philosophical discussions that come with the worst libertine and cruel actions, it seems like a rather monotonous collection of fantasies. From this respect, The Philosophy of the Boudoir (or Bedroom) is remarkable. Justice, or the Misfortunes of Virtue I guess? I have also started reading the epistolary novel Aline et Valcour, and it is in this genre much better than Les liaisons dangereuses.

No worries! I am always glad to help someone finding new interesting reads :-).

Meusnier Oct 14, 9:49 AM
I hope that you can find a copy for a fair prize! Yes, I can recommend you Verlaine's Poèmes saturniens. As you might know it, Rimbaud wrote very little, for he was quickly disgusted of the literary world of his time. A Season in Hell is a must, and for someone with such a username, I must recommend you his Illuminations! The first one is a self-explanatory long poem in prose, and the second comprises many obscure—from the meaning viewpoint—but beautiful poems (with little "fancy" words).

Yes, I know that there are so many good writers from this country (and I am not being a chauvinist haha). I also find it annoying at times not to have read everything I should have read!

I am not sure to understand you well, but by beginner, do you mean texts in French? The older the better (as long as we do not go before the 16th century), and the French of Molière is still a must in terms of simplicity and elegance. I love the The Misanthrope, and even went twice to the theater to see it (all actors but Célimène were good). From this century (Le Grand Siècle), perhaps you know about this famous mnemotechnic sentence: "Une Corneille sur une Racine de Bruyère Boileau de La Fontaine Molière." Boileau's Art of Poetry is a masterpiece, and some of his Satires exquisite—the 9th one where he makes fun of his quarrelsome spirit and ends up ridiculing all his enemies, who have indeed fallen into obscurity besides Perrault who is still famous—in France—for his fairy tales, plagiarised by the Grimm Brüder (but Perrault also stole them from the popular tradition)—Die Zwei Brüder is one of my favourite Märschen by the way. La Bruyère wrote aphorisms and portraits in his Characters, and I believe that it might be quite rewarding to read them little by little. Otherwise, the plays by Racine are the easiest to read. Corneille's Le Cid is quite messy, but you may like it. Last, but not least, the elegance and perfection of La Fontaine's tales has yet to be surpassed...

In the 18th century, Chamfort is my favourite aphorisms maker, and Sade is indicated if you do not mind cynicism and cruelty (his prose is superb).

In the 19th century, there are way too many people, and if I had to mention a writer who is rather obscure but equal to the greatest, the name Léon Bloy would come to my mind. Try The Desperate Man if this title does not frighten you. Since we are speaking about poetry, Les Champs de Maldoror is a magnificent, gritty, dark tale by Lautréamont. See what Bloy says about him in the afore-mentioned book:

One of the least doubtful signs of this cornering of modern souls at the end of everything is the recent intrusion into France of a book monster, still almost unknown, although published in Belgium for ten years : Les Chants de Maldoror, by the Comte de Lautréamont (?), A completely unrelated work and probably destined to resound. The author died in a shed and that's all we know about him.

It is difficult to decide if the word monster is sufficient here. It looks like some frightful underwater polymorph that a surprising storm would have launched on the shore, after having sabotaged the ocean floor.

The very mouth of the Imprecation remains gaping and silent to the conspect of this visitor, and the satanic litanies of the Flowers of Evil suddenly take on, by comparison, a certain air of innocuous civility.

But does it not seem to those who have read it that this unheard-of defamation of Providence exhales, by anticipation, - with the incomparable authority of a Prophecy, - the ultimate imminent clamor of conscience? human in front of his Judge?...
Maupassant's short novels like Boule de Suif or Le Horla (almost Gogolian) are fairly readable (I have good memories from Bel-Ami, but I read it back from when I was in middle school haha), and if you like Stendhal, you should enjoy seeing him travel in Italy and prove to be the most pleasant of all men in Rome, Naples and Florence.

In the 20th century, the most famous writers are also the best, and Proust and Céline deserve their place. Obviously, if you are going to read Proust in French, it will be quite challenging... Céline, on the other hand, uses a lot of old-fashioned slang in his poetic prose, but h is relatively easy to read otherwise. His easier work is also his first: Journey to the End of the Night. Do you know that his lost manuscripts had been preserved and given to a literary critic two or three decades ago? Yesterday, the second novel taken from these manuscripts was published, and it tells together with the first one a huge missing part in Céline's first novel.

Hahaha it's okay my child xD Honestly, I'm glad you don't watch it like me, I've seen the entire series 60 times and have almost entire episodes memorized. One time on discord my friend muted the volume on my and had me type what was being said, and I was correct 95% of the time. They said that's unhealthy. I replied: no. It's cute though, built good C_C xD

I heard Robert doesn't like Evangelion? ;-; I guess it doesn't surprise me. He also had mid opinions about TCAP <_< Only makes sense. =_=

Mugetsu- Oct 2, 9:55 AM
Also I updated my evangelion quote and song in my profile. It's a quote from Shinji in the manga. You should really read it my child! <3 It resonates with me a lot uwu

Mugetsu- Oct 2, 9:50 AM
WHAT?! Lisa I was talking about your profile picture lmao. But yes I was a pretty decent fan of Daria growing up. UwU Sorry to diss your waifu C__C xD

There's a giant storm happening in my town rn. ;-;

Mugetsu- Oct 2, 9:29 AM
You mean that old show with that bratty teen? .-. If it's not that idk what you're talking about xD I just know that profile is pretty OwO

tsubagakure Aug 22, 12:23 PM
it's wonderful!
my favourite one is "Kyoto", but "Yukiguni" (Snow Country) is also an exquisiteness.
All Comments