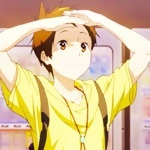 Lunar_ Oct 1, 2016 9:00 AM
It is fine. I just like learning more about options. Were you able to get a job immediately afterwards? What made you get into Japanese studies? Was it in part because of your interest in the media?
Thanks for answering.

darklordwendt Sep 26, 2016 4:47 AM
I can also accept that. And I have one question, is it Reinhard X Julius or Julius X Reinhard?

Willhelm is the best girl;-)

PeasantChan Aug 23, 2016 8:34 PM
Hey there, just read your FAQ on qualidea code. Did they seriously decide on plot devices while drunk? Not that I don't trust, but its so hilarious and makes way too much sense. Just curious, are you watching Qual Code to laugh with it, or at it? (or both)
thanks

darklordwendt Jul 31, 2016 6:35 AM
I saw your tweet when you asked why people love Kamina so much even though he is only in the first act of the show. You probably already have several answers though. For most guys, Kamina is the thing we want to be the most. In other words, we want to act as awesome and be as awesome as he is. I read a little psychology excerpt about how boys when they are younger strive to be what they are not. A little boy sees how awesome David Beckham is at soccer, then goes and joins the soccer team so he can strive to be as awesome (and one day maybe as hot) as David Beckham. And doesn't this ideal apply to Gurren Lagann as a whole? To Simon, Kamina is our David Beckham. The very thing he wants to be. So what does he do? He strives to be as great or even greater than his idol. Just how every boy wants to be hotte.... er I mean, a better player than David Beckham.

Just goes to show how much of an impact Kamina's character had on the anime community, and also just how much of an awesome character he is. Not all guys have this inspiration to be what they want to be. I'm one of these, and I didn't quite understand Kamina's character until I rewatched Gurren Lagann a second time. But anyways sorry for the long rant, I don't have a Twitter because I don't believe in social networks (unless MAL counts as one) so this was the only way to reply.

gloomymangos Jul 30, 2016 8:03 PM
Wow that list of completed animes is huge! Hopefully I'll get to reach that many or even more in the future lmao
Is there any animes you recommend (that were amazing to you)?
and wow your love for pink haired girls is real
I feel you

(also sorry for sending a random friend request. I read that you don't accept those right after I sent you one)