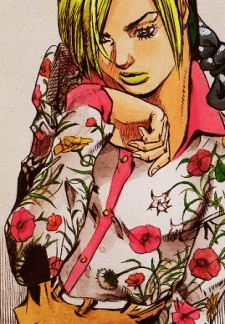 Yeeeeeeeahhhh....and now its over. ;w; And i think, this time forever...the manga will also end soon. D:

Of course i have. hehehe It was nice...what do you think of it? :D

KiraYoshikage Apr 1, 2016 12:04 PM
I see the live stream first and now, I came juste see the sub version. This was great. We got like 3 chapter for one episode. We got somme filler in the episode. The first scene is in the house of Kira(but we don't see him), he cook his breakfeast and the reson why we know it him, we see a girl hand.

The rest was very great. I can't wait to see more of Angelo. Just see Angelo, we know than Kira in the anime will the greatest thing ever. For the ending, it is a mysteryé

Ah damn its been awhile again. >.<

How are you? :D Still working too much? xD
Same here...work, work, work and yeah....not to forget work. xD Don't really watch many anime anymore. D:
I've never started the Ushio no Tora anime. :P Oh yes the Gintama arc is fantastic....what do you think about it? :D

KiraYoshikage Feb 22, 2016 6:36 PM
I play with Fire Emblem Fate since saturday(just the evening for monday beaucause I'm working) . This is so great. I buy the Special Edition. A Beatiful song from the game:
https://www.youtube.com/watch?v=nXzGj540NPs

Hias Feb 16, 2016 8:02 AM
I've been hearing about that game, looks very interesting :) I love that song too! Wasn't it originally a Vita game? If so then the remaster certainly does it justice. So there's a story and you explore urban areas?

Full CGI that I know of, might be cool but we'll just have to wait and see. Ronja proved to me that a full CGI series is not always a bad thing if it blends in and fits the show and its tone well.

Gintama for me is currently dropped, but I'm sure I'll pick it up again someday. Because there were episodes that I thought were quite funny and/or amusing. I used to watch a lot of Gintama parody clips on yt and my favorite was probably the Heidi one. I lost my shit at that part.

Mushishi I'll get back to one day as well, I didn't enjoy season 1 that much tbh. Too slow and just really wasn't my thing.

I've not decided on that yet. I probably will eventually, just not now since I replayed it only several months ago last year. As much as I love it and it's one of my favorite games ever, that'll be a little too much to replay it so soon again haha. Same with VII, I kind of wish I waited a few more months 'till I got my PS4 and I could have just played the PS4 version which has much sharper graphics and sprites compared to the original.

I own the PSX version but the loading times suck and ruin it for me, it made the game feel so damn slow and I couldn't take it after a while. Thankfully the Steam port is faster and even includes the handy dandy fast forward feature. Not as good as ones on emulators but it helps to break the tedium of random encounters.

Also ordered a new tv with my tax refund money. I got a Samsung 40", 4K at about $400. That's a steal in my book, was originally $750 but went way down in price last week. It's one of Samsungs entry 4K tvs so I'm sure it won't be absolutely perfect based on the professional reviews I looked up, but honestly I'm sure it'll look just fine to me. I'm just happy to upgrade from my old 32" 720P LCD tv. 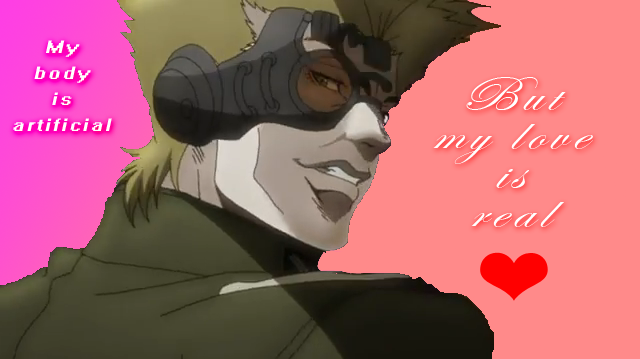 I am totaly disagree with this. This person has not make his work and compare the power. Seriously, Hol Horse is there.

I stopped watching it years ago, I was enjoying it but there were simply too many episodes for me. Doesn't help that it's almost purely episodic, so that wasn't motivating me much. Although there are bluray rips being released now for original series, so that might motivate me to pick it up when more drop.

It is indeed awesome, now I'm playing FFVI on Steam. People seem to hate the new sprites but personally I like them. The Steam version is a port of the mobile version of the game. HD sprites, includes the GBA exclusive content and its newer translation, and the original version of the soundtrack. Sounds like the best version of the game to me imo.

I had no idea, I've never played a Dissidia game before, I'll have to check that out sometime!

Hias Feb 2, 2016 12:06 PM
Sometimes a dub can be excellent, fitting to the point it's even better than the original Japanese. I feel that way about Bebop, I've seen some episodes in Japanese but it just wasn't the same for me. But, in general, my rule of thumb is to watch it in Japanese. Even if sometimes I will watch an anime dubbed for the hell of it, probably for nostalgia reasons because I used to watch nothing but dubs.

Yeah, you interested in the CGI series that's coming out this year? Could be pretty interesting, hopefully these episodes will be more adaptations of the books and not just new content.

Actually yeah, it's close to Gintama in humor because the director from Gintama works on Osomatsu-san as well I believe. Since you love Gintama, there's no reason to back down on Osomatsu-san either :D

Academia is the new shounen series right? Could be good, I'll have to try it out if that's the case then. Sakamoto looks pretty funny too.

I read the whole comic last week and it's worth a read. If way too short imo, I finished it on a single bus ride to work, lol. But I dug the art a lot and it was great seeing more Ellie/Riley moments. I had no idea a possible sequel was in the works, but now I'm hype as fuck on that possibility. Aside from that I have actually just been playing FFIV complete on a PSP emulator on my PC haha. I love this game, such a classic.

Hias Jan 21, 2016 11:11 AM
I did like Bloodlust! I enjoyed the original as well, but man does Bloodlust look amazing in the design/animation department. It still looks gorgeous to this day, only issue is that the bluray here is dub only. It wasn't even a bad dub at all, but a few lines come off as a little awkward. I would have preferred the Japanese for this one. I'm not even a dub hater but lately I just try to stick to the original Japanese, especially if it's a rewatch. I used to watch nothing but dubs so it's nice to go back and revisit my early watches in Japanese and get a different/sometimes better experience from it.

But the movie itself was really cool, nothing amazing in terms of themes or depth but it was a classy action film. And I still dig the setting a ton, post-apocalyptic western is just too fucking cool to me, that and combined with a tint of steampunk? sign me up.

Osomatsu gets better as it progresses, 15 was a stunner. I even still enjoy it when I come across a weaker episode from time to time(still funny but nothing I was on the floor over). The show is cynical and the everyone in this show is an asshole, but time to time there are moments that are quite touching, such as episode 9 and even 15 as well.

Erased looks good, not a bad ED at all! In general I've not heard that many complaints about this season, surprising because Winter season is notorious for being weak and usually just airing filler shit-tier shows to fill the timeslots so studios can churn out better shows for the Spring season(that's my observation).

Aside from Haikyuu and Osomatsu I have had no real airing stuff to watch. But if I had to pick at least one, Erased looks to be it.

I finished Last of Us earlier this week and that game blew me away. I got really emotional at some parts and the ending was great imo. Even played the DLC chapter and I even recently ordered the American Dreams comic off Amazon.
All Comments